These are currently available for free, including installation, in Victoria, Australia.

See your power with the Powerpal smart energy monitor. Track your home's energy use and start saving on your electricity bills!

Can I export data from Powerpal and is there an API available?

The last 90 days of data logged by your Powerpal can be exported to a CSV file for offline/desktop analysis. Navigate to the Guidance tab in the Powerpal app and select the Data Export widget to ge...

Looks like an API is in their pipeline if there is enough demand:

Can I export data from Powerpal and is there an API available?

The last 90 days of data logged by your Powerpal can be exported to a CSV file for offline/desktop analysis. Navigate to the Guidance tab in the Powerpal app and select the Data Export widget to ge...

any chance of somehow integrating this into HA or getting the data from it?

The only way would be to reverse engineer their app to find out how it pulls data from their cloud. I have the skills but not the device

ill have the device in a few days. might be able to give you the app login…

Just got mine installed today!

Hopefully there will be an integration soon.

Happy to provide any information anyone needs.

Got one installed recently.

While it was nice device for an ordinary consumer, integrating that into HA (or any other kind of automation system) was nothing but a pain.

Finally I got a solution that works 99% but it was expensive and ugly.

For those who interested - I used RPI4 (bit 3 should probably work as well), installed Android there, then used Tasked-analog automation software to do a screenshots every 2-3 seconds and upload them to my FTP; Then I used python+imagmagic to cut a portion of the screen with current reading and tesseract to do OCR and then again python to sanitize the output; The rest is trivial.

Once tweaked properly it works 99% (1% is left to troubleshooting since I have it running for just a day). 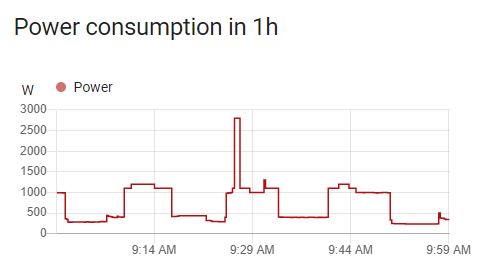 yup lost me at python

Well done! That’s an impressive workflow and solution… unfortunately it’s too complicated for myself but good on you for think outside the square.

I’m getting this installed today. Is there any update on how to get this integrated?

I have just had this installed today. As I understand it the data can be exported (historically) to a csv file and so could be imported into influxdb on a network drive and then displayed in grafana charts.
But this would not be in real time.
The answer for real time data or close to it comes when Powerpal gets an api up and running.

Just had a PowerPal installed. Has anybody tried using an ESP32 to receive the Bluetooth transmission and then pass into HA?

Dev says that attempting to interfere with bluetooth communications with PP may brick the device and void warranty.

I should report - it is.
Quite unreliable - it worked for me for a few days and then suddenly stopped.
Decided not to invest any more time in that and get DC link with ESP attached to the meter box.

“DC link” as in one of those clamps or a similar system like Powerpal that reads the frequency/intensity of the smart meter indicator?

Another issue with Powerpal is the display only shows consumption not a net picture. I have solar and would like to get the net consumption taking solar into account or if not be able to pull both data points - consumption and production.

“DC link” as in one of those clamps or a similar system like Powerpal that reads the frequency/intensity of the smart meter indicator?

Not really.
It is just to deliver some DC electricity to power up some ESPxx (to count blinks of that standard power meter) - totally custom made solution but worked like a charm for my previous house.

Yep, as far as I know - PP is not super-friendly for solar.
Once I have a chance to install solar for myself - I will include smart power meter that can track all that things.

Oh. So are you saying there is a direct correlation between the flashes and energy consumption? Is it simply frequency or also intensity?

Oh. So are you saying there is a direct correlation between the flashes and energy consumption?

Absolutely.
Depends on meter model, a number of flashes may be different but number of flashes directly correlate to amount of power consumed.
It should be written somewhere there - how many pulses represent how many kWt - just look around.
No, intensity stays the same - it is just pulse itself.

That’s great. Mine is 800imp so based on what you say I should be able to take a shot at calculating this. I figure you use a simple light sensor to measure the frequency?

I figure you use a simple light sensor

yep. I used photoresistor but heard that photodiode could also be used (may even be better in terms of reaction time but haven’t tried myself)
The key point here is to make some kind of enclosure to isolate a sensor from external light from outside as much as possible.

As I mentioned, it could be built using really cheap components but if you want to go with professionally made device - you may want to look here: https://openenergymonitor.org/ but that stuff is not cheap.