Just curious if anyone else has worked with these. I have experimented with a couple driving a Sonoff basic using my own code and have found they work great INSIDE but are terrible if used OUTSIDE.

Inside I get really good overall function with few false triggers. Outside it continuously seems to trigger no matter where I test at.

Just too much noise outside maybe? I have a couple but not had chance to play with them, can you provide more details on what you’ve done.
Do you mean inside/outside house or an enclosure?

Good point, taliking inside / outside the house. Enclosures do not seem to matter. At least plastic wise.

I’m using the output driving gpio14 on the output. I did tap off the 5v regulator to drive the chip but have read it may work on 3.3v.

Just have my own MQTT code and gpio14 pin reads to drive it. Running same code on both and running one inside the other out and different results. Swapped them and outside still a problem.

I used the same sensor but on a node MCU, and it also triggered. But I read somewhere that the 3,3v is not enough and it false triggers. I had it plugged on the 5v line, but off that I also read that the 5v line from the node MCU is not consistent enough for that and I would need some filter with a capacitor and resistor to determine the spikes. But I didn’t have the time to do it.

Also, the range is pretty high on these things.

They do not like 3.3v thus why I tapped the 5v to drive them. I did add some filtering cap / resisters and the resister to lower sensitivity. Still working pretty good inside but junk outside the house so I must have something around me that it doesn’t like. I did figure out the onboard relay on the sonoff will trigger it so I have a delay on transition now to avoid retrigger but still playing with it. For now I’ve just disabled motion detect in the software for those deployed. I may isolated the sensor power from elsewhere on the bench and see if it’s power flux or not. Fun fun. Thanks for the reply.

Raining can definetly trigger it because of the water. But i dunno. its just a little tinkering. How much is the range inside?. Have you put some 1Mohm resistor for the range drop on it?

I’m thinking this may just be more useful indoors than out. I have added the resister on one and it did reduce range to about 3 meters or so. For example I need to put it in the far corner of my kitchen to keep it from triggering too easily. I am sure it’s something here that is creating extra noise or something outside. I do have cheap PTZ IR WiFi cameras around the areas that could be influencing the things. It’s still pretty dang sensitive indoors too though. I will likely go back to trying PIRs outside for now. Nothing is easy lol.

Im trying to achieve the exact same as you.
Im a total noob in this field and learning as I go.
How would you go about tapping the 5v regulator? I imagine something along the lines of soldering a wire on one side of the regulator that connects to the RCWL?

Hope you still dwell in these forums!

I have never went back and tried to get those working again. Ended up with a quality PIR for my outside needs. Anyhow, yeah, exactly. Using a SonOff basic, I found the 5v input for the 5v to 3.3v regulator and soldered a wire to that trying to get 5v to drive the detector but really no difference. Can’t remember which pin is 5v in but I’m pretty sure that was the regulator chip I tapped off of in the image. Don’t try to measure while it has mains power though as there is little (or no) isolation on these things. Imagine someone else is much sharper on this than me though. 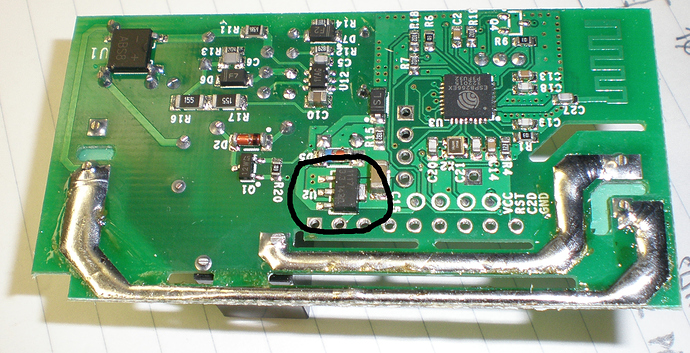 Thanks for the quick reply!

It appears to be the one on the right: 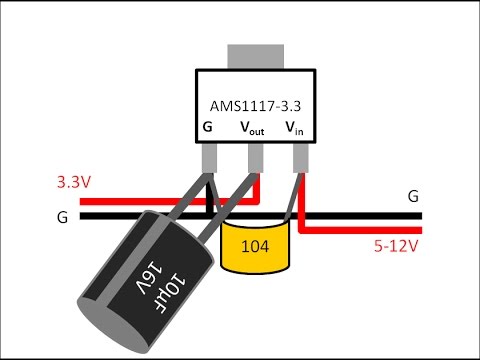 I want to share my experience. I’ve tried RCWL-0516 and shielded, expensive (relatively) HFS-DC06. Both looked promising inside, but outside their detection range from 6-8 meters became 1-2 meters (at best). I’m not even talking about false detections. I’ve event put dedicated power supply for sensor - situation remained the same. The HFS-DC06 with sensitivity setting looked like better option, but it’s only feature that you can configure sensitivity from zero to almost always on, and time the trigger stays active. Both of sensors were unusable outdoors.

I’ve googled version, where a guy combined PIR and microwave sensor. https://community.hubitat.com/t/homemade-motion-sensor/3478
If it would be usable outside, I’m willing to give it a try.

*I had the same problem, the systema triggers itself after a while and then it happens every 10 seconds. The pulse height is maximum 1.2 volts, I placed 3 diodes in series on the output of the RCWL-0516 and the problem is completely gone. the divice is working perfectly now. Good luck

Hi @on6ba what type and value were the diodes you used and was it the digital out or analog one?

Yes that would be great. Or PM me.

I used this sensor with a esp8266 and i have a lot of false triggers. Seems to be strongly affect by...

That doesn’t make any sense on a digital out. All what it will do it decrease the the signal voltage to a level that cannot be reliably recognized by the MCU as a binary high anymore. It will not reduce false triggers, it will simply miss them. It will also miss legitimate triggers.

The main problem with the RCWL is it’s extreme sensitivity to wifi. Having a wifi transceiver nearby, such as an ESP, will cause huge problems. And ‘nearby’ can be over a meter away, in more extreme cases. I could bet that nine out of ten cases where people report false trigger problems with this device, it is wifi interference. I have a setup with an RCWL monitoring a walkway outside, and it works flawlessly. It uses wired Ethernet with PoE and an Arduino. There’s also a metal shield just in case.

Here are some tests I did with this device in the lab. In addition to the usual connections, I soldered a wire to the chip directly, so to get the analog signal before the comparator and see what goes on in there: 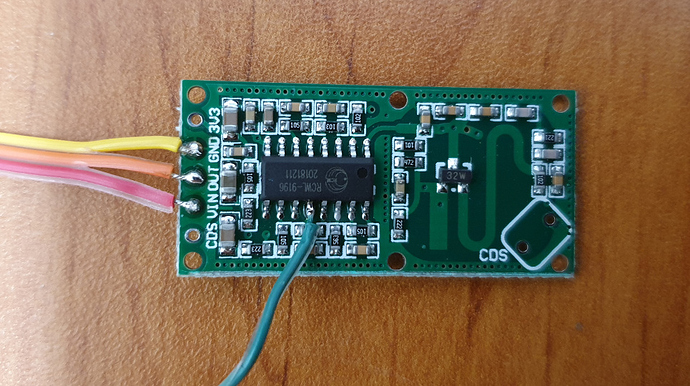 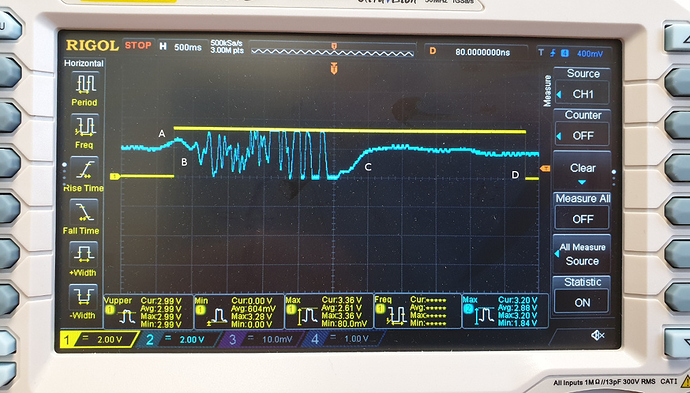 A - I start moving towards the sensor. The analog voltage increases, goes over the threshold and the digital output triggers.
B - The compensation kicks in and draws the voltage back to the reference. This process repeats multiple times until I stop moving.
C - I stopped moving and the compensation slowly brings the analog signal back to the reference level.
D - The internal delay was reached without movement and the digital output goes back to low.

Now I created a wifi hotspot on my mobile phone. I put the phone on the desk, 30cm from the RCWL. I asked a colleague to connect to the hotspot with a tablet from an office across the hallway. This is what happened:

You can clearly see the Wifi signal appearing in the analog signal. The first peak was too small to reach the threshold of the comparator, but the second one triggered the digital output. This was with a wifi transmitter (my phone) 30cm away from the sensor.

Now I put the phone 1 meter away from the RCWL. I also disconnected the tablet from its AP and just let the AP idle. It will still advertise its existence every so often. And it will still create false triggers:

The peak in the signal is lower, but the wifi transmitter is now 1 meter away. It’s still enough to trigger the comparator and as such a false trigger.

So as far as I see it, there is no way to use this sensor in combination with any MCU that emits a wifi signal in any reliable way. It might work sometimes. But you can never be sure.

This is my own little quick and dirty test setup with the sensor at home. Works really well, no false triggers in over a week. But as I said, it’s entirely wired and connects to HA over MQTT. It monitors a walkway outside through the window, sensitivity is around 7m. 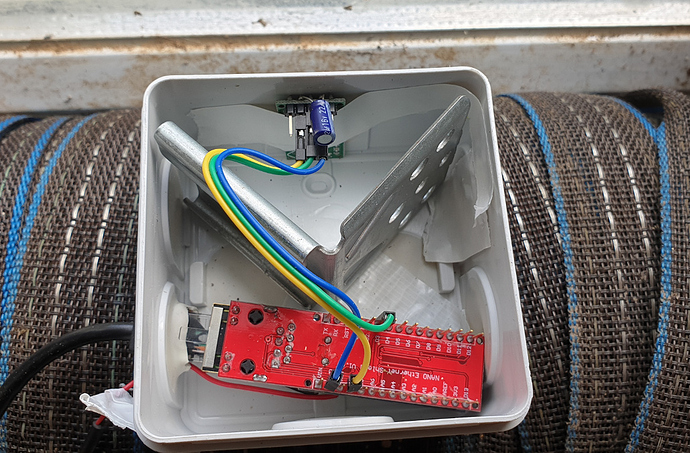 Wow thanks @HeyImAlex this is very interesting and good researching .
I had one on a ESP8266 and it work fine for about a week and then for some reason false triggers started.

So basically this can’t be used in any house that uses wifi.

Back to PIR then.

So basically this can’t be used in any house that uses wifi.

You can use it in a wifi environment, but you need to keep it away from wifi transmitters that are too close. A clearance of 1m to 2m should reduce the amount of false positives due to wifi interference significantly. The worst you can do is connect it to an MCU with onboard wifi (like the ESP, Wemos, Sonoff, etc) within the same enclosure.

PIR has other issues, especially outside. A combination of both might be a good approach. Or something completely different, like a ToF sensor.