Hello all, new to HA but really liking it so far. I recently integrated my Envisalink with HA and have been running into an issue. Whenever I restart HA any binary sensors that were marked on/opened are reverted back to off/closed. Is there anyway to retain the state of the binary sensor state even after a restart?

So after a lot of research I am not the only one with this issue. There seems to be a multitude of ways to solve this issue, most of which are above my skill level. I have narrowed it down to two possible solutions one being input_booleans and the other a custom component called Saver.

It seems like I recently had this same issue on a reboot, however I wasn’t sure if it was an issue that one of the doors was closed during the reboot and so afterwards the pre-reboot state was actually saved but then out of sync after a reboot. I had this problem with some ZigBee devices.

What you describe for using a binary sensor seems right as I understand it.

As you said @pabla, you are not alone.

Which method did you decide to go with in the end?

Bit frustrated with this to be honest. The official binary_sensor.mqtt documentation mentions the retain flag on 3 occasions, but when adding this to my configuration.yaml, it saya that retain is an invalid option.

Whilst I appreciate the change in the underlying logic, resulting in the state as unknown, is technically correct, I’ve been trying to piece together a relatively simple ‘solution’ to retain its previous state after a reboot, for quite a while now.

I say ‘solution’ as I know technically until a message is actually received, unknown is technically correct, but I would prefer to retain the original state, even if inaccurate. I understand the flaw in my logic, but I would prefer to accept this flaw, rather than my 11 binary_sensors report their state as unknown.
In effect, the devil you know rather the devil you don’t.

Alternatively, if someone could provide an example of their configuration.yaml, with a binary_sensor (for a door or window) that will not report its state as unknown, but rather its previous state, upon restart, I don’t believe I would be alone in thanking them.

@HA-Gecko so I don’t recall what your setup is, however, I use Zigbee2MQTT and looking at my devices there is a setting there for “Retain”. I believe this is where at least I need to configure this. 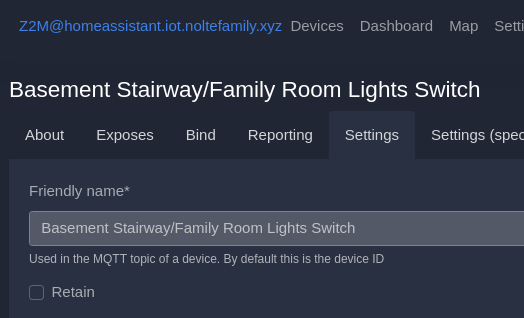 Now, as I’m reading through about that option I believe that has to do with holding on to MQTT messages. And perhaps that is what is really happening under-the-hood. Basically, with retain on the last state message that was received is still available and on startup HA, or Z2M, will be able to read that message still and set the state, otherwise without retaining some of the messages there is no message available for HA/Z2M to pickup to determine the proper state. The following blog post describes this pretty well.

So looking at the documentation for Z2M I believe I can set this in Z2M and it will in fact retain the last message with the current state of the device and then after an HA reboot we should see the state immediately set correctly.

Thanks for your reply @timnolte , however my zigbee devices continue to work fine with the ZHA integration as usual.

It was an oversight on my part not to specify I was referring to some 433MHZ GS-WDS07 door and window sensors (these are ones that transmit both an open XXXXA message, as well as a XXXXE close message.

After digging around I found this post, opting for strategy 2 via @123 's Node-Red flow, however I was still unable to have any success. After implementing the node-red flow and adjusting the relevant topics in both the demultiplexer node and within the configuration.yaml, I’m now not able to receive any state change whatsoever.

I may have a look at the input_boolean alternative, although I can see that getting pretty messy with my already preconfigured automations within both HA and Node-Red.

I will update this post if my endeavours prove successful

I’m now not able to receive any state change whatsoever.

Obviously something was configured incorrectly because many users have successfully implemented Strategy 2. Double-check the MQTT topics and the contents of the dictionary you defined in the function node.

I have not found a solution unfortunately. I got close to a solution by using the custom component saver which successfully saved the state of the sensor, but I ran into the issue of setting the state of the same sensor back to its original state. I tried a custom component called setter but it didn’t work as I thought it would. At this point I have given up and will just manually set states of the devices after each restart. A big flaw in HA, never really seen anything like it in any other home automation platforms.

Looks like in your case there is a solution, as others have posted so good luck!

A big flaw in HA

The flaw appears to be with the Envisalink integration because other integrations don’t have a problem ensuring sensor states are supplied correctly on startup. Post the problem you are experiencing as an Issue in the Core repository on GitHub.

@123 I don’t see how that integration has anything to do with the MQTT issue, unless that was originally mentioned in this post and I missed it.

Edit: I see that was in the original post. So my guess is that the integration you are talking about isn’t setting the retain option?

I was under the impression that by default all binary sensors don’t retain their states unless the integration supplies the states after a restart. So in the case of the Envisalink integration is not a bug, more or so a feature that has not been implemented?

Hm maybe I’ll submit an issue on GitHub and see what comes of it.