I’ve hooked up a Shelly 1 to my bathroom extractor fan - previously it ran whenever the bathroom lights were on, which seemed unnecessary, so now I have a humidity sensor in there and use HA to turn it on when needed.
I had hoped to make use of the switched live signal that came from the light switch (previously going to the fan to turn it on with the lights) as a signal to the Shelly, so that I could also identify if the bathroom lights were on or off - this part however does not seem to be functioning… and I can’t work out why!

The circuit in use: 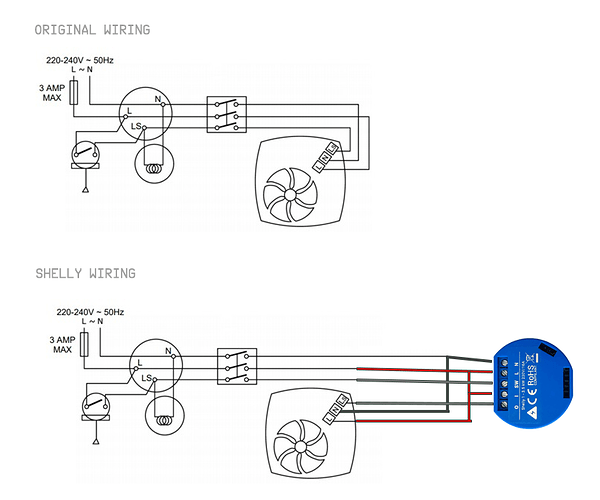 I was hoping that the SW port of the Shelly could be used to detect 240v live when the light gets turned on, but this doesn’t appear to be the case - I get no output at all from the Shelly when the light it toggled. (Manual relay control of the fan works fine though)

My code (simplified to just toggle the fan on/off with the light switch signal):

Can anyone see any reason why this setup wouldn’t work ?