Hello,
do you guys knows if the device temperature read by the Shelly is real?

Because the value reported is - most of the time - above 65°C, even if the awning motor is stop 0W.

Touching the two devices are not hot (even when the waterproof container is closed) but are at the ambient temperature.

Should I be worried about? 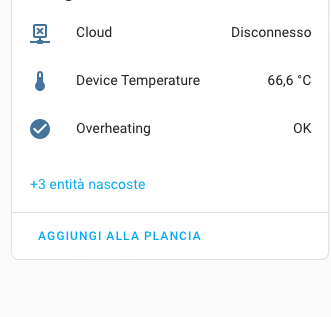 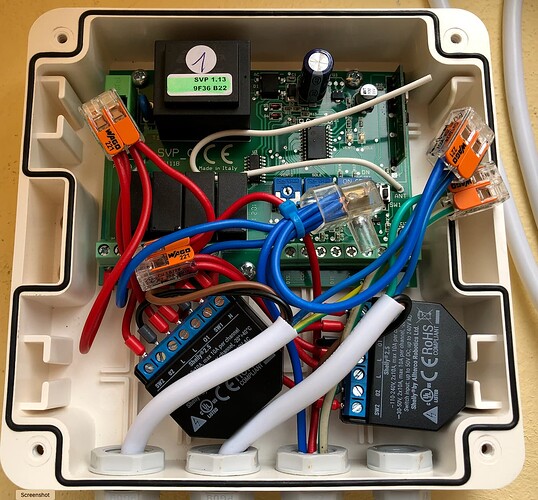 Is it hot?
Computer chips typically run at a much higher core temperature than we would expect. Most of a chip is actually a heat sink as all the power consumed by the chip ends up as heat and has to go somewhere. Large surface area to disperse the heat, and that will mean a lower surface temperature than at the core.
What you end up touching is the outer case of the unit which will be cooler still.

Is it accurate?
I suspect that the temperature reading for the shelly devices is actually an on-board sensor, just part of the chip circuitry. Chips these days come with everything built in. Therefore the reading is the core temperature of the immediate silicon base. Is this accurate? Maybe. Temperature sensors are usually either thermocouples or a temperature sensitive resistor/thermistor/diode/transistor, and all of these devices and associated circuitry only read relative temperature. Accurate temperature measurement requires a second reference point - ideally something like melting ice in water. Without this such devices make a guess at the reference point. A quick search on the web suggests Shelly monitoring devices are accurate when compared with other devices for ambient temperature, however for the encapsulated power switch devices checking accuracy is probably not that easy.

The base circuit will probably run on 5 volts, the standard for logic chips, but of course Shelly power devices are wired into the mains 230V AC and this has to be turned into 5v DC. No transformers these days but certainly some pulse width switching and a fat capacitor and some resistors, all of which adds to the heat. Power measurement requires voltage sensing across a resistor, so yet more heat. Also they are WiFi enabled, and I wonder if the power rating goes up if the WiFi signal degrades.

Does it matter?
Only if the chip starts to fry. I’m guessing anything over 100 deg C might begin to be an issue, but hopefully Shelly have used good quality components that are designed to carry on working at these temperatures. Up to 200 degrees, aparently, for quality components that are designed to run hot. I have a shelly switch installed in an outside socket which I use to measure the power consumption of my hot tub in the garden. Not used to switch or do anything else, just report the power used.

Here is the temperature graph for the past 10 days, including the recent record breaking heatwave here in the UK - not quite Italy but we were 38 degrees outside here in the south-west, which was a record.

From this I can see that it gets hot - but it is still working. It gets hotter when the tub is running (11:00 to 14:00 each day - can also see when it was used or ran twice). The base (minimum) temperature probably mirrors the ambient air temperature, but up by 20-30 degrees or so. I have a solar pv inverter that also reports the internal core component temperature, but the documentation suggests that a reading up to 175 degrees is quite possible, so I don’t think anything up to 100 degrees should worry us at all. Ironically, electronics are more susceptible to issues with wide changes in temperature rather than a consistently high temperature, so I’m not losing any sleep over a mere 75.

Thank you for the reply.

The strange thing is that I get these temperature without a load attached (the awnings’ motor stays on at max for 40 seconds), so the Shelly should be relatively cold for the most of the time, like a pc in idle (or at least this is what I thought).

I will keep an eye on it to check if during the night the internal temperature decrease.

I any case the device should have an over-temperature protection, so I should be safe (or at least I hope it)

Yup they have over-temperature protection that shuts off above a danger level according to the sales brochure. So what is the danger level?

I found the following in the Shelly FAQ FAQ - Shelly Cloud

So now we know. Don’t use them when it is hot or they might shut down…

I have 4 of them. Currently we have around 35-28 degrees (C) outside, so it’s pretty hot and my Shelly’s run at appr. 70 degrees. Since there’s NTC inside i guess that it measure not only chip, but also power supply etc…
I think we’re ok up to, say 80-90 degrees…

Now the external temperature is decreased a bit (32°C) and the Shellies are around 66-68.

OT questions, are you using the shelly integration or the MQTT? …just to know which one is better

Neither. all my modules have ESPHome, no matter what company. I this case i use shelly’s for covers.
As i already said, i hate anything cloud based and i avoid it if only possible.

As for MQTT goes: tried it, don’t like it. Too much work in HA, too many things can go wrong, (needless) mqtt server in between… MQTT is only as a last resort for me (as only solution), nothing more.

I started with Home Assistant this year and really want to keep it simple and UI based wherever possible. I don’t use MQTT at all, so I used the Shelly Integration which loaded and works without any problem (I kept clear of setting authorisation mode on the device as I believe that can be problematic). The device was set up first, set the WiFi access and settings, and I have turned off everything I don’t need (and don’t want) like cloud access, WiFi AP, MQTT, authorisation etc.

Integration is very rich with 19 entities, most of which I don’t need, but impressive with what is available.

Only issues I have had are that the device (switch) turned itself off once for no apparent reason - it is set to be always on, power up as on, and ignore the switch input (I’m just using it for power measurement). The power reading does fluctuate rather between the sampling. Happens sometimes for days on end, other times the value is very steady. As I am using a Riemann integration to convert power to energy I get an over-value due to this, but it is not critical.

As you can see from this mornings graph, sampling jitters by the same amount (around 65 watts) and as far as I can tell it is the Shelly device and not HA or the integration.

This is my hot tub (a softub) starting up. It has a 1kw motor/pump and does heat recovery from the motor to heat the water. Start up current is a little high as expected, then gradually settles down as the pump warms up. I have an automation using threshold to detect when the tub starts and stops, and I measure the energy with utility meters for day and month totals, posting a start/stop and energy total to a text file at start/stop. As it is a motor I have the required snubber across the switch to protect the electronics.

The Shelly power level is sensitive and accurate, apart from the annoying jitter.

Sorry for the delay but I was collecting some data.
Now, the graph temperature is very similar to yours.
On top the shelly temperature and on bottom the outside temperature measured by an ESP32 + BMP280

Temperatures are very linear during day & night until yesterday (I updated HA to the last version).
I don’t know why now I am having all these spikes…

So as we suspected. Shelly core device temperature is around 25-30 degrees above ambient, or more if the device is being used.

The jitter in my case appears to be from the shelly device - if I log on to the device webpage I get to see the power / voltage sampling at the top, and this alternates between a high figure and a low figure. No idea what HA has introduced into the equation.

I am just very glad that all this electronics I am using for control, measurement, and reporting is not mission critical. Imagine trying to land on the moon with all this lot over heating and reporting with spikes.

Yes you are absolutely right!

Both my shelly for unknown reasons, doesn’t sending the power consumption, I only have the current value in Volt but the Watt on HA is always 0…

Hi, I just wanted to share my Shelly 2.5 PM temperatures since they appear to be much lower than what you are experiencing. They all operate shutters so they have no load 99% of the day, but they are all mounted behind wall switches and the ambient room temperature is between 24°C and 26°C at the moment. The “eco mode” is enabled in the settings.