[SOLVED] How to template sensor value in entities card?

I am using IOT Link on several computers and it is reporting network upload/download as bit per seconds. It’s ok for me but, in Lovelace, I would like to display it as Megabit per seconds.

As there are multiple computers and NIC’s, I would like to avoid creating template sensors for every sensor and only template the display in Lovelace.

Do you know if there is a way to achieve this ? If I put the lines below in the template editor, it’s displaying what I would like so I guess the code is already present in Lovelace somewhere.

I also tried to use the custom card lovelace templater but it seems it does not work anymore in 0.116.

Somebody on Reddit pointed me to this custom entity : 🔹 Display whatever you want in an entities card row. - thomasloven/lovelace-template-entity-row

It’d be helpful if you’d post the solution here for people searching for answers to similar problems. I can’t make heads or tails of how to make lovelace-template-entity-row do what you’re describing.

Hello,
My bad, I thought it was enough to point the link to the solution but templating is always complex to write correctly … (at least for me

This is how I did it and how it looks like in Lovelace : 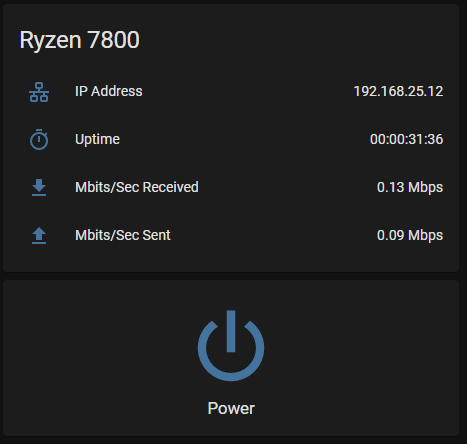