I had been using the REST integration to import SpaceX data into my system for launches and Starman data, but I was getting very frustrated with the stability of the REST connection to the SpaceX API - the integration regularly failed to connect and then returned null values. My automations to alert me of upcoming launches etc were going off far too often as the values pinged back and forth. (Followed the instructions at SpaceX sensors: Starman and next rocket launch to get that working).

So I have written a custom_component which pulls the SpaceX data into a set of sensors:

You can find the integration at https://github.com/djtimca/haspacex

Would love your feedback - first integration I have posted this way!

Also added as a fun infobox in Lovelace: 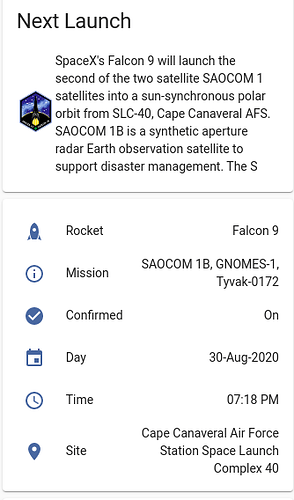 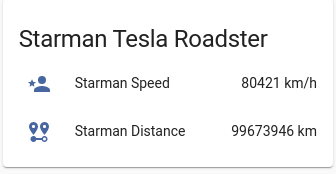 Markup for the card to give you the above is:

If I connect a monitor it wont get pass Intel nuc boot page.

What version of HA are you running?

Doh! Sorry it had to coincide with installing!

Happened when installing integration. SSD is one week old. So a bit strange.

So the Integration was not the problem… but your SSD ?

Installed it and use your markup card. Missed some sensors:

Great, then it is a faulty SSD on my part. Only a week old.

You’re missing those sensors? Any errors in your logs? How many devices do you see under the SpaceX integration in configuration?

Also icons are not ok.

All 3 have a eye as icon

no errors at all.

These sensors I have in develop tool:

That is a very strange output - looks like you’re getting the full output from the Spacex API, not anything from the integration that I wrote.

In your Configuration -> Integrations page do you see the SpaceX integration as being installed?

Does it show any devices? Any entities?

If it is not showing in the Configuration -> Integrations page it doesn’t sound like you have my integration actually installed. This integration uses the UI / Config Flow to install so after installing through HACS you need to reboot, then go to the integration page to add it.

Forgot the step of integration.

I see 2 errors while adding the integration:

Restart Home Assistant and let me know if it is still there… it should be closing the connection, but I have had challenges with other integrations the same way. Seemed to go away with a restart.

When reboot HA both errors are not coming back!

I’m not sure. But seems that the Add-On have negative result on automations here.

Motion sensors and turning on lights give problems since I installed the SpaceX part.
Now removed it and see if the automation problem is gone …