I’m currently playing with a WS2812b LED stripe, the long term target is to have multiple LED-Info boards (Exactly the same boards at different places) that show the status of different sensors without the need to use a smartphone all the time (Door/Lock/waterTemp, fillingLevel, …)

Some of the Blueprints I’m checking are

Current status: LEDs are controllable, but I’m not sure about the best practice to go forward, so I thought I’d ask your oppiníon before I do more than playing with 2-3 LEDS:

1 Question:
Due to the warning in light.partition (Don’t use it to controll single LEDs due to memory overhead) I’m using the light.adressable_set to set the status of a LED, depending on the status of a HomeAssistant state:

Wow, lot of code just for mapping a single entity (open/close) to a single LED. Did I miss something or is this the way to go?
My still existing problem with this is that it won’t recreate the old state when I reboot the ESP. All LEDs are off until the status changes in HA. The suggestion I found was to add the code as well to the on_boot but that would duplicate a lot. Is this really the way to go?

I’ve looked around if there is some way to extract

To some kind of methode with parameters and then reuse it since that code section will be likely used 20-50 times. Did I miss here a base functionallity of ESPHome (or the correct search term)?

Question 2:
How dangerous is it to ignore the warning in light.partition? My intention would be to have around 20-30 individually addressable LEDs (With a Wemos D1 mini / pro)
Could I test this by partitioning the LED stripe and check where the memory consumtion ends up and check if it’s acceptable or will this cause some kind of uncontrollable memory leak?
Then I’d have the individual LEDs and could control them out of HA with automations
(having the logic within the espHome sounds better for me, having automations for enabling/disabling 30 LEDs will be a lot of stuff in the Automation section of HA)

Wow, lot of code just for mapping a single entity (open/close) to a single LED. Did I miss something or is this the way to go?

Indeed. I started the same way and quickly realized that it gets to confusing utilizing addressable_light.

having the logic within the espHome sounds better for me

What I actually did was to use the addressable light display so it can be “controlled” all in one lambda.

The logic is in esphome I just get some senor values from ha.

Thanks a lot @orange-assistant, that was exactly the trick I needed. It also solves the problem with the unset state on startup.
Maybe not exactly the intended usage, but good enough for this use case. Now I can start with building the hardware.

Just wanted to show you the first hardware draft, work is still ongoing: 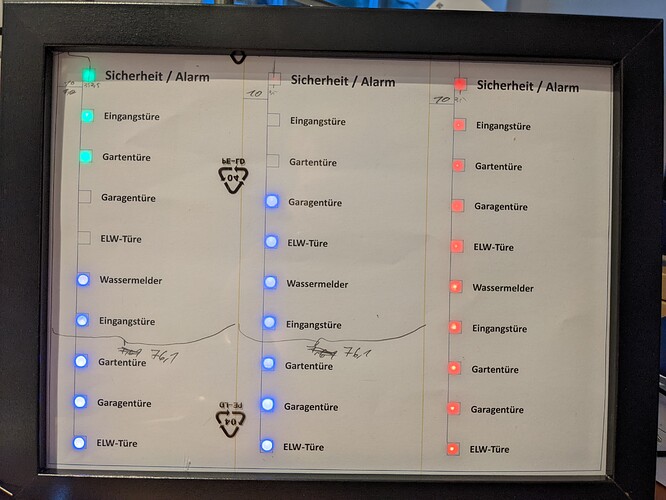 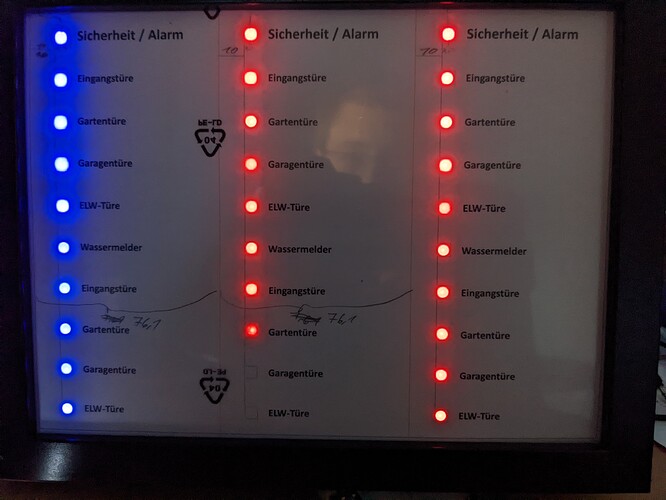 I’m on the road to update an old “Homestatusdisplay” software to a better integration with this method above.

My display looks very similar to the one from laser-jet. Very handy status display version, especially in the winter to check open windows

Please, can you share the home-assistant integration and automation (examples) ?