This could very well be a UniFi issue, but I think I have it down to something weird happening in HA.

In UniFi I set it as a fixed address, and I tried a few variations of setting HA to use DHCP and also tried having it set a static IP.

At some point, I ended up with two IPs (both those above) configured in HA for ipv4 for the same interface (there is only one interface in my setup).

I ended up accessing the VM that runs HA directly and used nmcli to clear all network settings (rm /etc/NetworkManager/system-connections/*, then took the interface down, then up).

I then shut down the VM and changed the network adapter’s MAC address. In UniFi I had it forget the old MAC address client and created a new one with the new MAC. I then started the VM back up.
At this point, there is no reason to think UniFi should assign the old IP.

Yet, somehow, HA ended up with the old 192.168.1.51 IP. At this point, I’m assuming this is HA doing this since UniFi would have no reason to associate the new MAC with the old IP on it’s own.

Also, did you set the IP address for the correct interface in HA? You should have a VLAN specific interface. Mine is set in the host OS as I’m running supervised. 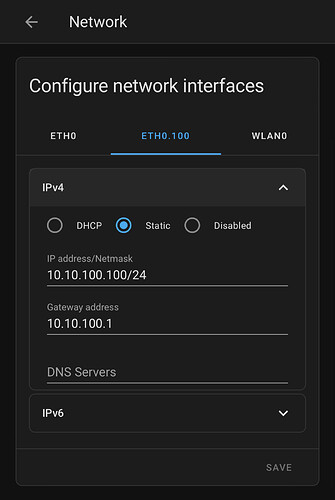 Didn’t make it that far yet. The VLAN was basically configured the same as the default network, just with a different subnet. I was just trying to get HA online using the VLAN before setting anything additional up. I have other devices on the VLAN and they’re working properly.

Also, did you set the IP address for the correct interface in HA? You should have a VLAN specific interface. Mine is set in the host OS as I’m running supervised.

Because HA is in a VM, I only have a single interface (which is a simple bridged nic, it has its own physical nic and uses the adapter bridged). After disabling my original static IP the interface in HA was set to just use DHCP, but somehow it ended up still having the static IP on the default VLAN. Again, I don’t know of any way UniFi would have done that since I had changed the VM’s nic’s MAC address. So as far as I can tell, something in HA seems to be hanging on to that .1 subnet.

Suffice to say - I spent hours on this today and have no idea what is causing it. Somehow HA is back online, albeit on the wrong subnet/vlan.