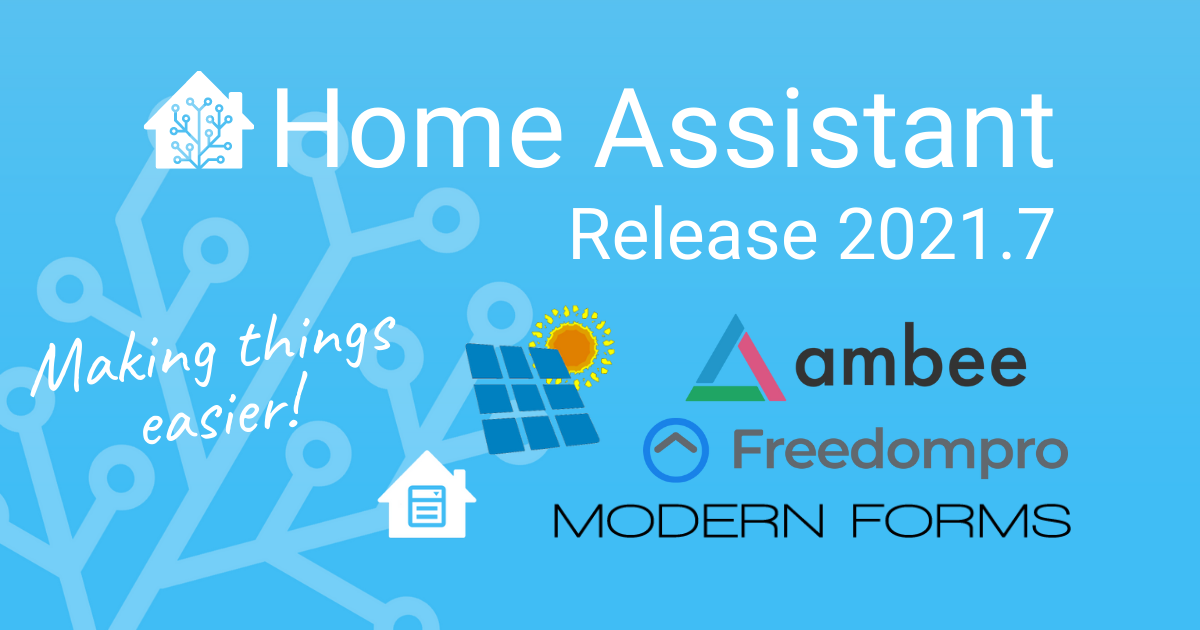 An interesting release, with a bunch of little goodies to make things easier in creating automations, scripts and doing templating. Those are things that in general, make me very happy. Mainly because, well, I use Home Assistant to automate 😁

Also, we are saying “hi!” 👋 to a new type of entity, which is really exciting and I can’t wait to see how that is being put the use in the future.

Lastly, I want to give a shout-out to @klaasnicolaas! He has been an intern with Nabu Casa for the last months. Besides doing the community highlights, he has been working on some awesome stuff that will land in upcoming Home Assistant releases.

His internship is now over, and he passed with a nice grade. Yet, he could not leave without a little present as it seems. He contributed the Forecast.Solar integration, bringing in energy production forecasting for your solar panels. Really cool!

Alright, that’s it! Enjoy the release!

The difference is that while the input select is configured and managed by you, the select entities are provided by integrations.

This means integrations can now provide entities that give a choice. Either in the Lovelace UI, but also via automations using services, and via the Google Assistant.

select.png801×383
Screenshot of a select entity, providing a choice from a list of options.

Some integrations started implementing the first select entities as of this release. MQTT & KNX made it available for use, WLED uses it to provide controls on selecting and activating a user preset, and with Rituals Perfume Genie you can now change the room size for your diffuser.

If you are creating some complex automations in YAML, you might be familiar with this. Consider an big automation, with a whole bunch of triggers. But how would you know which of those triggers actually triggered the automation?

You can now assign an id to your triggers that is passed into automation when triggered, allowing you to make decisions on it.

The above example triggers the same automation twice, when the gate opens and when the gate is left open for 10 minutes (probably forgotten). Each trigger has its own ID.

Now introducing the new trigger condition! So you can add a condition on which trigger fired the automation.

You can use the trigger condition in all places where all the other conditions work as well, including things like choose from a group of actions.

Rather use the UI to create and manage your automations? No problem! These new features have been added to the automation editor as well!

trigger-condition.png696×231
Screenshot of using a trigger condition in the automation editor.

In Home Assistant Core 2021.4, we added the ability to debug automations. This release, we’ve made these same powerful tools available for scripts!

So, this helps for the next time you are wondering: Why didn’t that script work? Or why did it behave as it did? What the script is going on here? 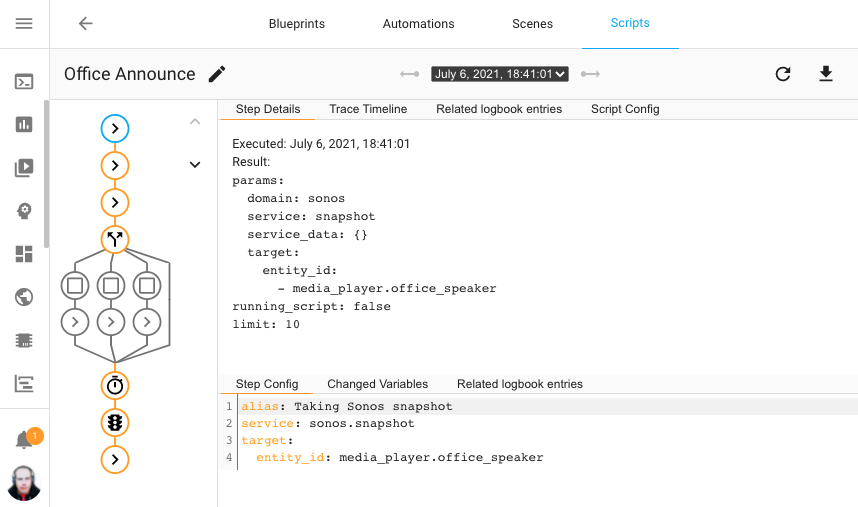 script-tracing.png858×507
Screenshot of using the new script debugger on my office announce script.

The above screenshot shows a previous run of a script, using an interactive graph for each step in this script; with the path it took highlighted. Each node in the graph can be clicked to view the details of what happened on each step in the script sequence.

Referencing other entities in triggers and conditions

A small, but possibly helpful, change to our script and automations. You can now reference other entities for the above/below values of numeric state triggers and conditions. Both sensors and number entities can be used.

Additionally, the time conditions now support a similar thing using other sensors that provide a time in the before and after options. Time triggers added support for that already in a previous release.

Working with dates in templates

If you ever tried to work with dates in templates, you probably know that that is hard. And honestly, that will never go away, times, dates and timezones are complex little beasts.

However, we realized that the hardest part of using date & times with templates is converting the state of a sensor or text to a datetime. This release we added a small template method to help with that: as_datetime.

It can be used as a filter or as a method. Here is an example of calculating the number of days until my drivers’ license expires:

If you are using the Home Assistant Container installation method, we recommend using a specific version tag; however, that means you need to update the version tag each time we release a new patch version of Home Assistant.

Thanks to @kmdm, as of this release, we also provide a series version tag that always points to the latest patch version of that release, in addition to all existing tags we already provide.

There is much more juice in this release; here are some of the other noteworthy changes this release:

Having said that, the first Python 3.9 warning has landed, (just before closure of the beta… 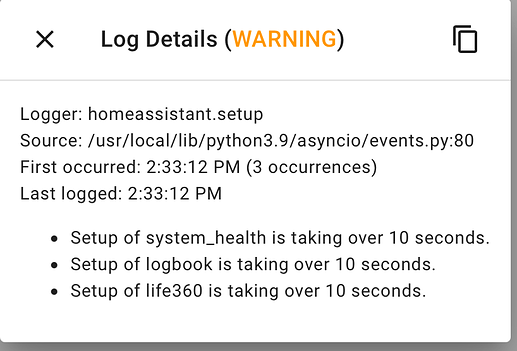 not sure if this wasn’t mentioned using 3.8 before, but just in case…

That is not a python 3.9 warning, that is your integrations taking over 10s to setup warning

Lots of amazing stuff here but for me the big lifesaver is the Docker series version tags!

yeah, I figured. first proof of python 3.9 though. and as said running smoothly as ever.
was just setting up the new Forecast.solar integration, prepping for what’s to come. So looking out for next month…

Thanks for the trigger ID’s and the referencing of other entities. This will clean up my automations so much!

2021.7 just landed in the last 2 minutes so thats probably why it didnt work for that one and it will be only available from this release, so 2021.6 wont be there

Nice, looks like a lot of good quality of life improvements for automations, happy about this release.

You were too fast!

The release build just finished, so they are now available (only for 2021.7 and up)

Ah, that’d be why - Makes complete sense! Thanks for the help

Will give it a go now!

Trigger ID is going to be VERY welcome, now I will finally be able to use a timer finishing as a trigger and be able to react to it in a choice

I recently discovered that it has been available since version 2021.4 except it was not highlighted in the release notes and simply listed as one of the many changes (it appeared near the end of a list of about 700 changes). However, id was limited to being an automatically generated index value where '0' represents the first trigger.

You can test for which trigger occurred like this (shorthand notation for Template Condition):

The advantage in 2021.7 is that you can now assign a custom string value to an id and, for those who are uncomfortable with a Template Condition, there’s now a Trigger Condition. Lastly, it is now incorporated into the Automation Editor.

This is a very useful feature and, now that it has been enhanced and formally announced, is likely to help users create neater, yet more sophisticated, automations. I have already employed the 2021.4 version of id in my automations and it allowed me to consolidate several into one and/or streamline their logic.

FWIW, the advantage of using a custom string value vs auto-generated index value:

So far so good! Great additions to this release

Only minor new issue in my log is about wemo long press support (which I don’t use, so not chasing it down)

Actually, id was previously used for the automation debugger, this variable has been renamed to idx, id has been newly added for consumption

id will have the value of idx, when no id is set though (backward compatible).

Nice update ! I see a secondary use for solar forecast for climate control !
Substitute solar panels by glass surface of your house/appartment and you could get a prediction of how much energy flows into your house that way and use that to tweek your thermostat in winter and your blinds in summer : if the predictions are high in summer close the blinds, or in winter delay the heating to save energy.

It would probably be a relative value only, but I’ll have a look at it once i update at home !

id will have the value of idx, when no id is set though (backward compatible).

I was just about to ask that question because my automations already use id without assigning it a custom value.

I get this after update :

The result is, that the whole integration is not loaded and the trackers, etc. are not working anymore.