Since I upgraded my Pixel 4a to Android 13 I’m seeing way more issues with the Android Companion App; not sure, though, if this can be addressed in the app or if it’s a device issue.

The biggest changes for me are right now:

Anybody else seeing these or similar issues?
Looking especially for feedback from Pixel 4a users, of course.

Just to be clear: this is not bashing the app, I’m just trying to figure out if Google introduced some additional issues with this ‘feature release’ which seems to have added nothing but new bugs to my device.
Here’s just one example that was allegedly reported during beta testing, but Google didn’t bother to fix it for the full release: Pixel 4a(android 13) call issues when using a wired earphones with mic - Google Pixel Community

Hmm, I have a Pixel 4a 5G, not sure if your’s is the 5G version or not. I have had no problems with Android 13 and the HA app that I can tell. Been running Android 13 for at least a week or some now.

It’s not normal for the app to be force closing itself at all. Mine in both a 4a and a 4a5g do not crash. I am still pre-13 but I’m mentioning this because you said it was also crashing before the upgrade and just "more"now after . .

If the app is being killed, next time it happens open the app and go to Settings > Companion App > Show and Share Logs and see if there is a Recent Crash tab. The app tries to save the last failure so if we can get that data it would be something to solve.

Unfortunately, it’s been ‘normal’ on most of my devices from the day I first installed the app - just seems to happen more often on some devices than on others.

@chairstacker do you notice if the crashes are occurring at your home vs away? I’m wondering if you have something setup on your home network that is causing communication problems and the result of that is crashing the app? The fact that this seems “normal” for your across multiple devices seems like it’s not a device/app issue but something else that is in common. The other thing is are all of your devices Android and what other common app is installed on all of them?

Definitely not normal for the app to be crashing. I have it installed on a Pixel 3a and a Pixel 6 and I have never seen the app crash. I have occasionally seen it freeze, but never crash.

I think I did that before but will do again when it happens and I have time.

@timnolte - don’t think I have anything specific set up that makes it crash. I don’t use the Nabu Casa remote control when I’m out & about, I have WireGuard set up for that. The app definitely freezes when I open it outside my home network and don’t have WireGuard started before I do so - which is to be expected because there’s no connection to the server.

I’ll look into which apps are installed on which device - good point.

I have to admit, though, that I have a bunch of widgets on the home screen of my phone; a mixture of ‘Entity State’, ‘Service Button’, and ‘Template Widgets’. Some of the ones you see below are even layered, i.e. the Service Button in the background and a template widget on top of it to show me the current state. And while the actions triggered by the service buttons used to be almost instant, they are now taking 30 seconds and longer - just seems to have over the last few weeks (with upgrading Android and the app). 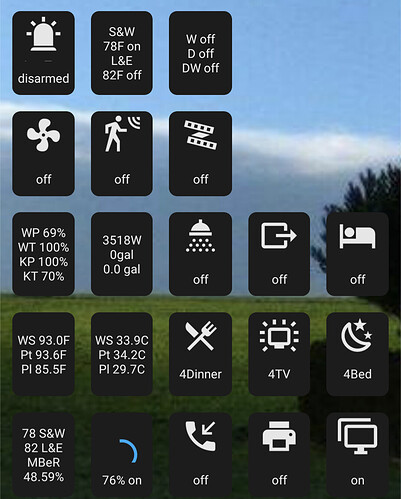 I’d love to try and take the widgets all off, but I was hoping to eventually see an ‘export’ or ‘share’ functionality so that I can take a backup rather than having to painfully re-build them character by character if I delete them just for testing purposes.

Hmm, interesting. I don’t use any widgets as I use the Device Controls quick access in the notification area. You can actually switch from Google Home to Home Assistant, and this gives me access quickly to all the controls I want without having to add a bunch of widgets.

But you don’t use NabuCasa and don’t necessarily have Wireguard running, unless you plan to open the app. But presumably - @dshokouhi can let us know what the case is here - but presumably, the app will be continuously trying to reconnect to the Home Assistant instance, so that it can update the widgets.

Thanks, @dshokouhi - here’s what I captured from the last crash:

Can you open an issue on GitHub with this error please?

Will do, do you want me to refer to the OutOfMemoryError in the title?

Quik Update:
I went through the ‘start fresh’ process as suggested and had the app up and running again - everything seemed to work fine.
Added a widget to the home screen and was impressed how quickly the switch reacted to me pushing the ‘Service Button’ widget.
Added a 3 more widgets to start replicating my original setup when I noticed that app was starting to have issues again - tried to capture info from the ‘Recent Crash’ tab but it wasn’t available under Settings > Companion App > Show and Share Logs.

Deleted the widgets again and the application started to run stable again.
Hate to have to give up on the widgets but will do that for now.

Not sure, though, if it’s ‘just the widgets’ or the combination of me using the Nova Launcher V7.0.57 and widgets.

I use widgets, android 13, and Nova on a pixel. No issues. Just fyi.

Thanks, @calisro - what version of the Nova Launcher are you on?