Hi, been lurking on here for a while but just signed up. Thanks everyone for the documentation. With the Shellys, anyone considered putting them into the roof rather than the wall cavity? I know it would get hotter, but there would also be more air flow. I am waiting for the 1L to be certified before moving my lights over. My old man is an electrician and does all my work, roof space is easy to get into and he doesn’t care either way.

Yeah there’s a bunch of posts about that way back in the thread.

As long as your roof space does not exceed the environmental ratings of the device. Unfortunately monitoring my roof space revealed that the temperature sometimes exceeds the 40°C max temp rating of the Shelly 1.

Hi @JohanPotgieter,
Not sure if you ever got an answer to this, but I have successfully flashed the Deta fan controller (6014HA) using serial. The pin outs are almost identical to the 3 and 4 gang switch with one important difference. GND is one to the left of the image of the 4 gangs. See https://mikejmcguire.files.wordpress.com/2020/05/untitled-2.png andhttps://blog.mikejmcguire.com/2020/05/22/deta-grid-connect-3-and-4-gang-light-switches-and-home-assistant/

This post is for those looking at ceiling fan options.
I have integrated a arlec grid connect ceiling fan into HA using localtuya. I installed the custom component through hacs and added it as an integration.
Getting the local key was a bit time consuming but should be quick in future now I know what I am doing.

I will probably use localtuya for permanent installed devices like this as selling a house with esphome flashed (pretty sure it is not even possible with this model) ceiling fan is basically a dumb fan for the future owners. At least with tuya you can reset and leave the instructions.

Thanks Tim. I am going through the research now. Currently thinking of a refurb Martec from eBay with IR remote and using a Broadlink blaster to control it. Total cost just under $200 I think so comparable with your option.

Having said that can you provide some more info on your experience. The reviews show a number of people with electrical buzzing or case vibration noise. How is yours? Out of interest what do you end up with on the wall, just a single switch to isolate power? Does the lowest fan speed get quite slow - my wife isn’t happy with my current Zigbee controller as low is still quite fast. What entities do you end up with in HA?

Thank you. Will give it a try,

Looks like Bunnings now sells a single socket version of the Deta 6922HA smart powerpoint, called the 6921HA. It also has energy monitoring, which sounded good so I bought one (Altona Nth Bunnings). However, I can’t find them on their web site, which is a bit weird - maybe they are too new.

I spent way too much time tonight trying to get Tasmota on it, initially using Tuya Convert, and then trying serial flashing. However, nothing worked.

Then after a bit (actually a lot) of research I finally figured out which WiFi module it was using - the Tuya WB2S module - https://developer.tuya.com/en/docs/iot/device-development/module/wifibt-dual-mode-module/wb-series-module/wb2s-module-datasheet?id=K9ghecl7kc479

So, as this doesn’t appear to be an ESP8266 or ESP8285-based module, as far as I know it isn’t going to be possible to flash Tasmota (or ESPHome) on this, so just wanted to save anyone else wasting their $45 like I did.

I haven’t heard any buzzing noise from mine and the slow speed provides a gentle flow of air. Ours is above a bed and we usually have it on the speed 2.
You end up with a fan and light entity. But that is entirely up to you on how you set up the devices under the local tuya integration. I am still tweaking settings to get all the functionality there.
I have on/off for the light and fan working fine. When I get some time this weekend I need to map the parameters for speed and brightness to work properly.
The wall light switch is still in place and using this will turn the light on when turned back on at the switch. The fan appears to go back to its previous state when power is returned.

There are a couple of variants of the fan. I have the “smart blaise” but there is also a “smart Boston” so some of the difference could be in the versions but might be more to do with luck of the draw.
Or the might be actually talking about an ac version and put the review on the wrong fan. I wrote a review on bunnings and don’t remember needing to verify anything to prove I had purchased or was talking about the correct device.

These devices are probably going to become increasingly hard or impossible to flash.
For devices like this I would seriously start looking at using the tuya cloud (inbuilt) or the tuya local (custom) component.
The local tuya integration is still developing but has some huge benefits that there is no flashing required, the device is suitable for resale, warranty still intact etc. there is a bit of a knowledge hurdle to jump for this one at the moment but hopefully as it becomes more popular this will get better instructions.

I really like esphome and tasmota but think their place is likely into be limited to custom build components for me in the future. With local tuya being my default for off the shelf components.

On a general note regarding Deta branded gear… it’s rubbish. I cringe every time I come across Deta equipment in houses because it’s just so poorly made.

Unfortunately the house I bought 2 years ago was full of it, likely installed by the owner, not an electrician, so I have been busy replacing it all with Clipsal gear. For smart requirements I use Clipsal plates and pushbuttons with Z-Wave equipment behind them. It’s more expensive but far superior.

Just wanted to provide an update on my Nue Zigbee Fan Light Controller. I had one partially fail and contacted Kevin at 3A Smart Home to seek a replacement. He sent me just the base so the PCB was swapped over. The new base is a HUGE improvement for me. Previously the capacitors were internal and my fan was hardly changing speed between the three settings. Now the base has the original capacitor externally which means my fan is back to its original performance which is fantastic!! 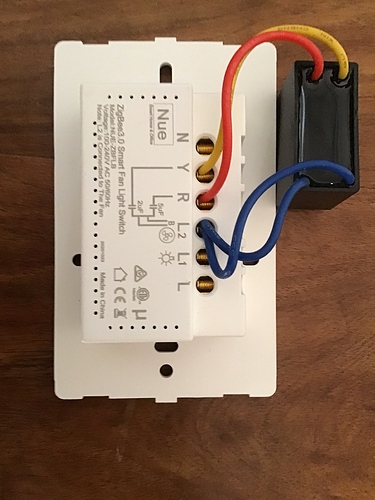 Seems like a fair observation @sparkydave - Deta gear is basic stuff. Wondering if you have any recommendations for 3-speed fan controllers? Either Z-Wave or Wi-Fi (ideally non-cloud) but probably not Zigbee. From reading - I don’t think the Aeotec dimmers or Shelly 2 dimmer can be used for this purpose. Maybe the C-Tec wall switches? Am interested in your thoughts. thanks

I don’t think the Aeotec dimmers

Correct you can’t use the dimmer but I use a Aeotec switch for one room. However you can’t change the speed, it just remains at whatever speed you have set on the rotary selector. In my case that isn’t a problem as we always leave it on 2.See post above yours for a Zigbee option that I am now happy with.

Thanks for your feedback @OzGav. I’ve read mixed things about the Nue switches but haven’t tried them. Things like buzzing noises and poor quality are talked about. Maybe that has improved though? Also not too sure about Zigbee for switching but happy to be persuaded.

Seems to me the guy is constantly looking to improve the product. The in ceiling switches work perfectly for me, I have them connected to my Hue hub. The fan ceiling switches above are connected to zigbee2mqtt as they are more complex than the Hue hub can understand. No buzzing for me, the only thing is the relays are a bit loud but that is just at the point of power change then they are silent.
I am yet to try a dimmer that is next.

I’m looking up setting up a set up for my elderly mother.

I’m going to run zigbee usb adaptor
The button to act as emergency buttons
Sensors to pin point where is is.

But should I go smart switch or smart bulb it’s only to monitor where she is and start a timer xxxmin bring up alarm.

Will a USB zigbee stick control all zigbee devices.

Ah, good to know. Might have to give the Nue switches a try. Thanks

If you are after the fan light switch then make sure to specify you only want the latest version with the external capacitor. I am sure there are a bunch of the older versions still kicking around.