The ESP32-H2 chip has been certified with Matter and Thread.

Texas Instruments, Nordic and Silicon Labs have solutions as well.

For someone who already developed a integration this should be relatively simple to integrate.

Is anyone working on this integration?

Wondering if it would not make sense to base it on code from Home Assistant’s ZHA integration?

I believe that even though Matter/CHIP uses higher application-level architecture that rely on other IP-based protocols for communication, it still shares many common attributes and properties with Zigbee.

Not got the skills myself but it would maybe make sense to repurpose the ZCL implementation from zigpy and zha-device-handlers/zha-quirks libraries as a dependency for a new Matter/CHIP integration as the zigpy libraires are primarily maintained by Home Assistant’s ZHA integration devs?

Way too much debate over what’s an open standard, but I’ll weigh in ….

The big kahunas are what will make it work. Suddenly devices will be able to work on hundreds of millions of Apple, Amazon, Google hubs already in peoples houses, and billions of mobiles already in people’s pockets. Who can pass up a market that sized?

This should be two potentially separate requests:

Thread can be installed with docker Run OTBR Docker  |  OpenThread or in other ways in a Raspberry pi. In the Openthread web there are few hardware to do it, and fortunatly there are at less one stick CC2652R stick - slae.sh

You can access to the thread Network throw IP adress so I think it would be sooo easy to access in home asistant with the card website and duckdns.

Also one app was released in Android, called thread.

It would be awesome if we could integrate that on de home asistant in other way like with an addon.

One add-on which brings the OpenThread Border Router is the Silicon Labs Multiprotocol Add-on. It supports running Zigbee and OpenThread on a single (Silicon Labs) radio (with the Multi-PAN firmware flashed). It is rather experimental though at the moment.

Add-on Repository for Development. Contribute to home-assistant/addons-development development by creating an account on GitHub.

How do you say it best? If you are going to do something, do it right. Do what’s right, not what’s easy. There are no truer words – and this is how we’ve approached Matter from the start.

Thread and matter are different things please vote only for thread integration here!!!

There is another connectivity as ZigBee and Zwave. It is called Thread. You can find it on some google, amazon and apple devices. We have the stick We have the api We have guides for building up a router We have de docker to use it But we don’t have the integration or the addon for do that. Vote please. Thread is different to matter.

I’ve been doing a lot of research and benchtop testing of Thread & Matter/CHIP with the goal of pulling the IoT ecosystem into the IP Automation world.

I am finally somewhat confident in my benchtop lab system that is based on the Nordic nRF series chips. I have an OTBR on RaspberryPi with the nRF52840 dongle as an RCP. Three nrf52840dk and one nrf5340dk dev kits. A couple of Afafruit nrf52840 Feather Express boards. I have some nRF Thingy:52 devices too but they seem like a bad purchase now as they don’t support Thread.

I’ve been using the sample firmware code in the nRF Connect SDK such as the OpenThread Coap Server/Client and the Matter Light Bulb/Switch examples. It is time for me now to start working on the interfacing of the Thread or Matter network into the Home Assistant ecosystem.

I’ll do more reading here to catch up.

I just hope Home Assistant Yellow (the board being developed) can be able to support Matter out-of-the-box (the hardware, since it’s not very upgradable I guess)

I have been playing with matter (via openthread) for about 2 months now here are some things i discovered:

With a USB RCP dongle (mine uses nrf52833), any linux computer can become a border router for matter.
My border router runs on Openwrt on Xiaomi Router R3, “router”, of course. 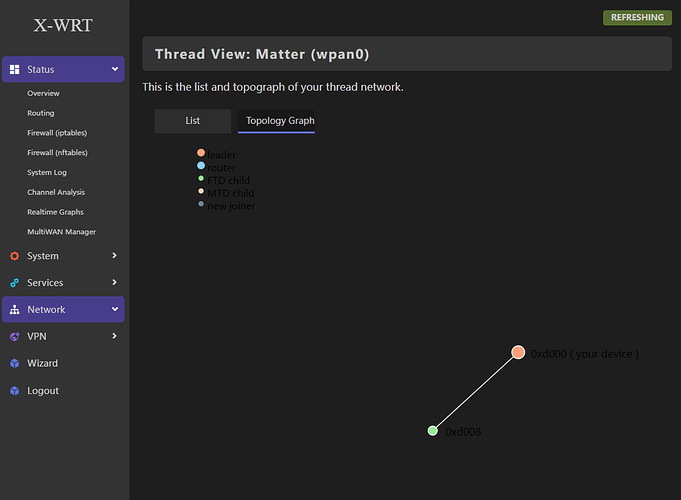 USB appears as a Network device - wpan0. Matter messages go through this interface and are TCP messages.

I really want the matter (openthread) border router and home assistant to run on the same router and that’s it, just like zigbee now. 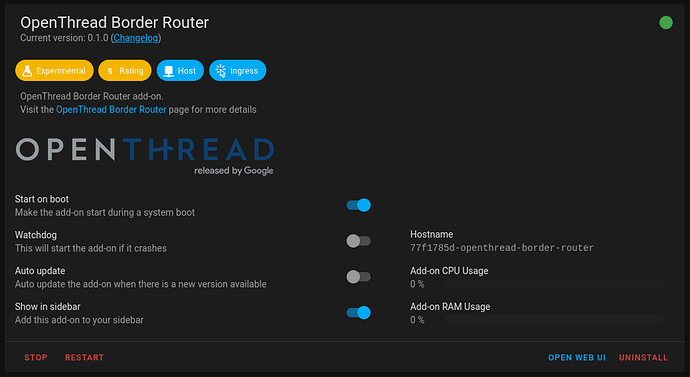 It is built directly from the upstream OpenThread sources, specifically the OpenThread Border Router for POSIX platforms. So far I joined nRF52840-Dongle based CLI devices (ot-cli-ftd, basically Thread devices with a CLI for testing). I’ve tested it using Nordic Semiconductor with the USB nRF52840-Dongle as well as with Silicon Labs EFR32 MGM210P flashed with OpenThread RCP firmware (the radio on Yellow).

The work is based on my previous SiliconLabs Zigbee/OpenThread Multiprotocol Add-on. This add-on uses the vanilla/upstream OTBR. It supports regular OpenThread RCP protocol radios (it does not support the SiliconLabs specific CPCd as the above add-on does). Ideally the SiLabs Multiprotocol add-on should be stripped of its forked version of OTBR and reuse the upstream OTBR version, however, for that to be possible upstream OTBR would need to gain CPCd support.

@agners Wondering if you could ask the other Nabu Casa developers what the plan is for the new Matter integration and if they will consider use re-use (or fork) the existing zigpy library (that the existing ZHA integration uses a dependency) in your Matter implementation for Home Assistant as well?

The reason for asking that specifically is because the existing zigpy library contains a “Zigbee Cluster Library” (ZCL) that follows the specification standards by Connectivity Standards Alliance (CSA, formerly Zigbee Alliance) which if I understand correctly also plays a part in the Matter standard for Thread based devices?

I am also wondering if you have considered what programming language that the Matter components and dependency libraries will be coded in? …will they be written primarily in Python like Home Assistant?

Reason for that question is that just read in the latest Home Assistant newsletter that Dominic Griesel (a.k.a. AlCalzone on GitHub) from the Z-Wave JS project will join Nabu Casa later this month to focus on further improving Z-Wave JS and will help Home Assistant in adopting the new Matter (formerly CHIP) standard.

I know that unlike zigpy which is written in Python (same as the Home Assistant core and other native integrationscomponents), the Z-Wave driver for Z-Wave JS project was instead written entirely in JavaScript/TypeScript project is written.

So the question is really if the existing zigpy library can be re-purposed in a Matter implementation for Home Assistant and by doing so hopefully be able to share developers with ZHA and other zigpy based projects and that way be maintained by more developers.

Anyone got OpenThread Border Router firmware images built for CC2652P/CC2652 based adapters?

They are inexpensive and commonly available + loads of people in the community already got these:

And many more such Texas Instruments CC2652 (and CC1352) based adapters listed here:

The ESP32-H2 does have a 802.15.4 capable radio and should support OpenThread RCP firmware:

Example code is on their GitHub repo for esp-idf (OTBR example uses both ESP32-H2 and ESP32):

In this folder, it contains following OpenThread examples:

It is also assumed Espressif is working on preparing ESP32-H2 for Matter certification ahead of launch:

If anyone has any contacts at Espressif’s Sales or R&D then maybe Nabu Casa could get samples? 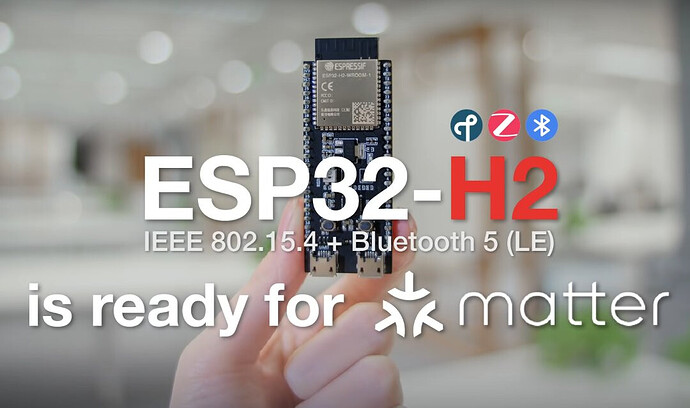 @Hedda
The Home Assistant Yellow project has some information about Matter support. The chip used in the Yellow will be updated to run Matter and Zigbee simultaneously once the firmware is available. I think you will find Matter support comes to Home Assistant then as it will be supported by their hardware.
Unfortunately the Matter release has been delayed a bit again recently, so a lot of things are still a little in the air with it.

The Home Assistant Yellow project has some information about Matter support. The chip used in the Yellow will be updated to run Matter and Zigbee simultaneously once the firmware is available. I think you will find Matter support comes to Home Assistant then as it will be supported by their hardware.

Read the Home Assistant Yellow update and it is directly related to the OT add-on agners linked above. 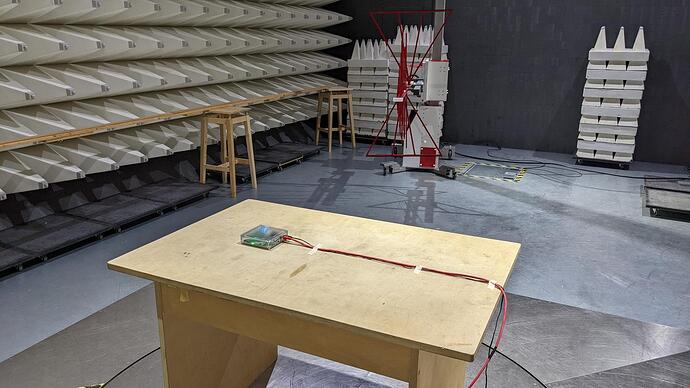 Time flies like crazy. It’s been a productive two months since the last update! Let’s dive right in.

It is also related to the development of his Home Assistant Add-on for Silicon Labs Multiprotocol stack: 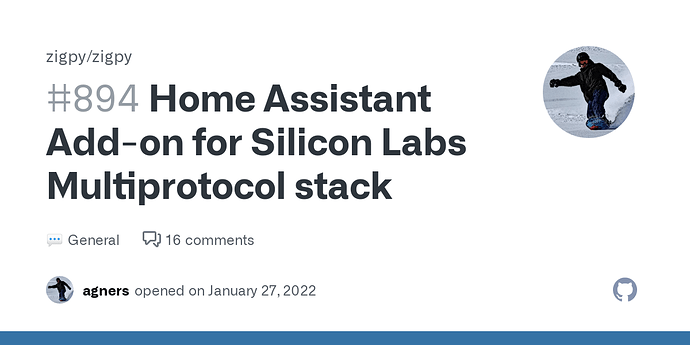 Hi all, Working on Silicon Labs Radio for Home Assistant Yellow quite a bit, I recently stumbled upon their AN1333: Running Zigbee, OpenThread, and Bluetooth Concurrently on a Linux Host with a Mul...

Probably everyone reading here is already aware, but just in case: 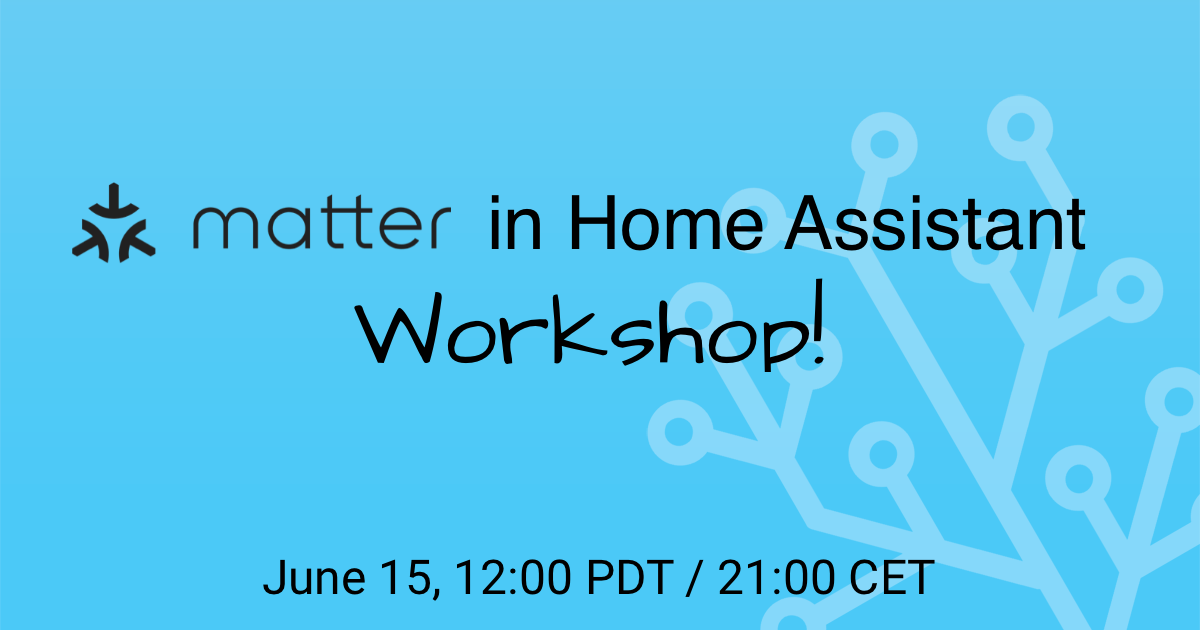 On June 15 we're showing how Matter will work and guide you in getting it set up.

On wednesday there will be a workshop on Matter, using the ESP32-C3. That’s definetely a good sign

Is there some development I could follow anywhere on this?

Also, my main usecase for this would be to idiomatically expose my home assistant controls and devices to Matter-enabled hubs, allowing multiple of those home-app ecosystems to work with them. Basically something similar to the current HomeKit integration.

For example, I’d want to be able to give someone the ability to control a homekit-enabled device with their google home app, via home assistant, by exposing all of the device’s controls through Matter, basically “converting” a legacy homekit product to matter.