Docker HassOS on a rpi3

I have managed to setup a backup script using git on github. gitupdate.sh is placed in my config folder and backs up my files inside config folder. I run it by using the ssh & web terminal add-on.

I told it a step further and setup ssh key where I don’t need to add my github username and password everything I run the script and I also want to setup a one button press anything I need to backup the folder on a fly.

Issue 1: While the script works when I run it via the cli. That is it commits and push the new folder to my repo. However, when I run it in the frontend using shell command, it does not fully work. It seems to only commit and not push. I know this because, if I run it via the cli, it says Your branch is ahead of 'origin/master by xx commits. There isn’t any error in the log I can see. 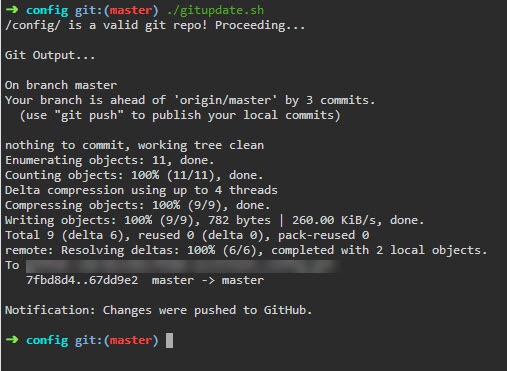 Issue 2: The script breaks where the ssh key is denied. The reason is that HA install a fresh /etc/ssh/ssh_config file whenever I update HA. How to prevent this from happening or what can I do to have that file retain this settings?

Here are my settings and config files.

Issue 2: The script breaks where the ssh key is denied. The reason is that HA install a fresh /etc/ssh/ssh_config file whenever I update HA. How to prevent this from happening or what can I do to have that file retain this settings?

I have fixed issue # 2 in the OP by directing github to look for the ssh key in the gitupdate.sh file rather than looking in ssh_config file. Here is the updated file.
gitupdate.sh

I still have not figure out Issue #1. Help.

Did you ever figure this out? Having the exact same issue (#1 listed above)

I am actually wondering if it is because the SSH addon is actually running in a separate docker? I don’t know. It seems like a permission issue

I have found a post or 2 where they got it working. Now, whether they had install the ssh addon on a docker install I do not know. But you maybe correct.

Got it working now.

I was looking around for answers and was reading the ssh & Web Terminal documentation. At the bottom, it states you can execute the add-on as a service: hassio.addon_stdin.

Tested and it works.

Well, the above was wondering now has stopped working 2 months ago when I noticed the files are not updated for the past 2 months. I think one of the HA updates had breaking changes or whatnot. I am stump as how to fix it. Anyone have a working solution, please share.

The ssh addon removed the stdin function so that is why it no longer works. I have been trying for 3 days now to get it working as a shell command for use in an automation.

I have had no issues getting a script setup that works if i run it manually but hitting host key errors when i try to run it from an automation.

Surely we cannot be the only ones with this setup. There has got to be others doing the same with success. Please share.

I have it working, though likely have violated some people with regards to security.

I was seeing a host key failure message previously (code 128 to be specific).

I tried lots of things, adding a known_hosts file to my config/.ssh folder, copying pub keys to github all over the place etc. Nothing really changed compared to my original setup after following this Peyanski Guide

Working setup is as follows.

The cd command in the script may be redundant but i have not tested without yet.

Really the thing that made it work was the core.sshCommand line which turns off the key checking. I am no expert on this and am continuing to do more research as to what the implications are of having that in there, but at least I’ve got a nightly backup working now.