Hi!
I am rather new in home automation - and i am currently tinkering with my first home assistant setup.
We live in a new house - with a new “smart home” electrical installation.
It’s called Enet Smart Home ( a collboration between some big german companies - Jung and Gira ) Basically is a scaled down version of KNX.

The system works well - and i am happy with it. However - since day one i have been looking for some way to interface to it. They have an app - but that only good for the things in the “enet system”.
I want to be able to integrate it with my survailance system - and my sensors etc.

Now - the good news is that - they have started on supporting Google home / Google assistant as well as Amazon Alexa.

So - as of now - i can use my iphone with Google Assistant App - and the Google Home app. Becuase all my lighting shows up as bindings. So i can dampen the lights - and turn devices on and off - wich all works great.

But - is it possible to control google home devices from within home-assistant.
Can i somehow get “google bindings” - so that i can problematically control my lighting - by making Home Assistant - giving the commands going through google?

Hi Again.
OK - did some more searching - and seems that the solution is need to make this work is the

That’s why we buy devices that work WITH Home Assistant.

I know, but long story short; we have just build a brand new house - and we got the Complete Enet Smart Home Solution - at a very attractive price - because we have agreed to do Demos for other potential customers. - So it was kind of a no-brianer. I had not idea that the system was so “closed” being that it’s actually just a scaled down KNX solution.

But - i have head that they might enable the KNX protocol for full fledged access in the future.
so until then

Did you see this?

Instructions on how to integrate KNX components with Home Assistant.

Yea - that was actually what i thought would work :).

based on the info on the site:
https://www.enet-smarthome.com/en/
and off course on jungs homepage.

But - the KNX / IP gateway - does not plugin to the enet server - not out of the box anyway
the problem is that the “bus” is not 100% compatible - afaik.

I have a enet installation including enet server at home, and have created an integration to Home Assistant. Right now it only works with lights, I don’t have blinds etc.

Send me a pm if you want to try it.

I’m new here. Until recently, I didn’t know home-assistant at all, but a friend recommended it to me.

I also use the eNet Smart Home system and am now looking for an integration to test the system.
I am unable to send you a private message, but i think it’s also interesting for others because the system is becoming more and more famous.

At this Moment i only use my eNet System with my iOS App and in addition to this i usw Alexy for voice commands. But in the future i want to setup a tablet with a kind of dashboard and home-assistans could be the solution for my idea.

If you have a Solution to integrate eNet, I would be happy if you share it with us

Hi Foth.
I worked abit with Magnus on creating the code for the integration.
i did mostly test the code that magnus made.

i was however not “stable” enough for me to use a productive integration,
so instead i used the google assistant relay plugin - and re-created all my lights
as template lights using scripts to turn them on and off.
not a very pretty solution - but it’s working.

you can pm me - if you would like the python code that magnus and i worked on.

thank for your fast response.
Sure, I’m interesstet, but maybe I’m stupid, but i don’t find a PM button

Would be great if you can write me!

Last time i write them, because of Apple Home-Kit and Alexa Integration, they gave me the Information that they work on Alexa and Google Solution and after short time they will announce it. After one Week it was Online.

I will let you know, if i get some Informations!

Did anyone ever get the Gira Enet Server working on Homeassistent?

I have this one: 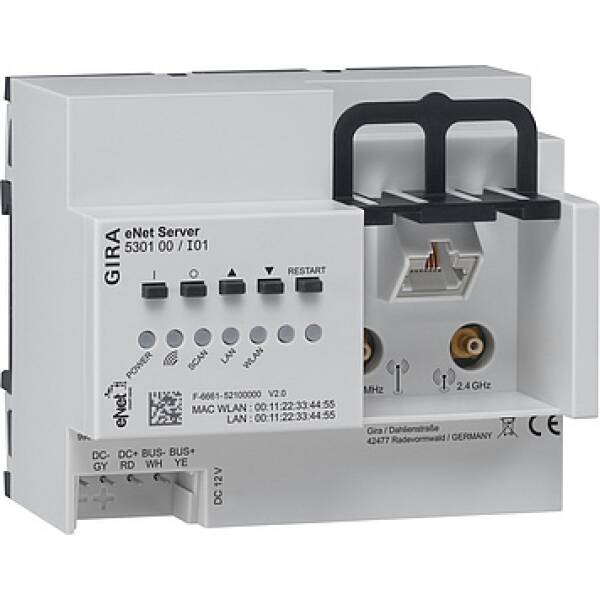 I hope anyone can shine a light on this integration.

Hi!
I have the exact same Enet server.

There are no official integration.

Magnus has made an working integration, but it’s still very “rough” and it’s not implemented as an HA addon. It’s a python program that will interact with the Enet servers Administration interface.
This interface is made by the enet folks - using jsonrpc - which is what the program also uses to communicate.

I have the code in a local copy - and i believe magnus alså has it, but i am not sure if he has done any more coding on it.

i would we willing to help implementing the plugin - and to help making it work as a real plugin - but my time is very limited at the moment.

As for my way of solving it temporarily:
I have created template lights - that interacts with the assistant relay service -hence having “optimistic” lights - that i can turn on / turn off / dimmer. That then calls the assistant service - and makes the lights turn on and off via the google assistant interface. It actually works pretty good for integrations and so on. But there is off course no “state” - meaning that if i turn on the enet lights on outside of HA - then HA wont now the real state.

BTW - i have contacted the enet team many time - and suggest that you all do the same. I keep asking them for an official MQTT api / addon - preferably buil into the enet server - so that its more future proff.

Hi Ronni, I have the same issue still looking at an eNet interface. I would like to have the code and see if i can help , and what email to use for nagging the enet team