Has there been any thoughts around providing integration with Span? https://www.span.io/

Does it have a publicly available API (application programming interface)?

If not, then it is going to be very difficult to write an integration for it.

I can’t find any information on an api. The device doesn’t even mention if it’s cloud or local. I’d wager that it’s a closed API and cloud based.

I have been researching this for the past month, just signed a contract for whole home solar system with the Span panel upgrade. I actually had my solar installer go through training and become a certified installer, so when I have it installed in February or March I’ll be able to dig into it further.

From what I know today is that this is primarily cloud-based with no direct connection to the home network - so at this time there is no access to local push/polling API. There are two offline opportunities on the system, since the most likely use case is to access during a power and internet outage. The first is a cellular backup, I have been told that there is no access plan attached and is like the cellular connection to the Solaredge inverters (we will see when the fine print gets here). The second is an ad hoc network from the Span to connect from phone app to panel - at this time it doesn’t appear to have computer access but with so little information out there it’s hard to know for sure. There is probably an admin webpage however.

At the beginning of the year (2021) they received a round of funding to build an Amazon Alexa skill that is active today, so there may be a way to poll through that way depending on what available sensors are available to it. Maybe reverse engineer from that? (far beyond my skill set)

Since it’s a new company and seems to only have cloud access it is a big gamble to have it installed in my opinion, but that hasn’t stopped me in the past. At least it works as a traditional breaker box if everything dies in it, but I would like to have direct local access just in case the business fails/gets hacked/change service agreements.

If I get anywhere after install I’ll keep the community updated on what I can learn from it, especially if I can get info directly from the company. If nothing else this community would be the ideal people to be selling to

Have your SPAN been installed yet? I’m midway through my installation along with a 2 Powerwall install. Cutover should be complete this coming week.

I’m curious if you found any way to integrate with HA.

It was supposed to be installed this week, but ran into some delays with our ground mount building codes at my Township. The apparently don’t like things built before the front plane of our house - we have 8 acres and the house is tucked all the way to the back of property so it shouldn’t be too hard to convince them.

After our township board meeting we should hopefully get approval and begin the install. Good luck with your install, let me know how it goes!

Just heard back from Span in regards to an API:

"Today, SPAN does not have an open API for local control.

For Home Automation purposes, SPAN is only compatible with Alexa Integration.

We are always evaluating new platforms and hope to offer an API solution in the future, however, there is no set timeline for when or if this will become public.

If you have any other questions, please don’t hesitate to reach back out."

In short, nope - but we hope maybe someday if you are lucky maybe?
For now it looks like we will have to port through Alexa to get anything done. Haven’t looked deep into that skill yet, but I am not confident in giving Amazon access to my home power.

@ tylas13 curious who you reached out to at SPAN.

@galak I reached out to [email protected] and got connected to a friendly support person. Maybe if enough of us ask for this support they can look into it deeper.

She did say she talked to tech and they are considering ideas in the future, but no local or API support today. They must have some API support however as the Alexa skill can communicate with it. It could be possible to tunnel through there, but there is a hot chance in the underworld that I would connect my entire home power network to Amazon to control. There is a possibility that local REST support can be contacted through JSON script, but as with a lot of these things it would be one patch to have it disappear.

I will find out soon, they just started digging my ground mount foundation yesterday!

i found the local ip address of the span panel via my router, and it seems to run a web server with a local api. i’ve documented the api as best i can by examining the api requests and responses

you can see it here: span.io api documentation · GitHub

I just got my new SPAN panel activated this past week, and have just started playing around with Home Assistant. As I migrate my home from Hubitat to HA, I look forward to finding a way to integrate SPAN with HA.

As stated by @hyun007, the panel does host an unsecured web server which has some really basic information about the device, but one piece of information that is currently available is real time total electricity usage that shouldn’t be that hard to scrape.

A casual port scan of the SPAN ip address shows:

I’m a little concerned by the apparent lack of security, but it’s all still pretty early in the game for SPAN.

Anyway, I’m here willing to test out anything that the community puts together for this.

Side note, the “Spaces” request is resulting in an internal server error for me, but “Status” and “Panel” function.

Can someone else check out the web server at port 8000? It seems to be tied in to the “Spaces” functions, but causes errors for me.

port 8000 seems to be some sort of ‘unbrick’ functionality. going to http://span.local:8000/ in the browser, it seems to make a request to an /unbrick path

http://span.local:8080/api/v1/spaces results in a valid json response for me.

if it still doesn’t work for you, i can tell you that i called up span to let them know that my tesla solar/powerwall install was done, and they turned on functionality to start calling the powerwall api for grid/solar/battery awareness. maybe that’s the difference in our setups?

you could also try contacting span support. they were pretty easy to talk to last time

I’ve been working on a Span integration on & off over the last several weeks. Here’s my initial integration that needs cleaning up and feedback. Should be installable via HACS as a custom git reo: 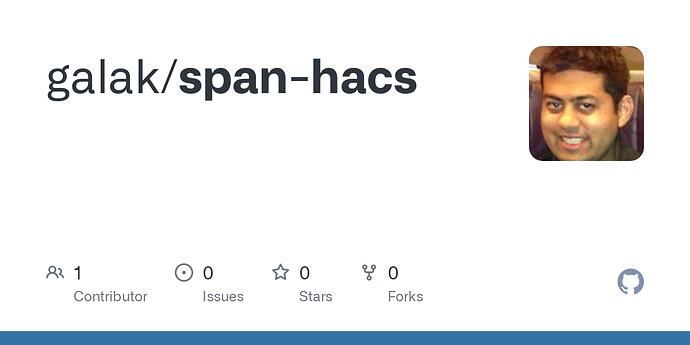 Contribute to galak/span-hacs development by creating an account on GitHub.

if it still doesn’t work for you, i can tell you that i called up span to let them know that my tesla solar/powerwall install was done, and they turned on functionality to start calling the powerwall api for grid/solar/battery awareness. maybe that’s the difference in our setups?

you could also try contacting span support. they were pretty easy to talk to last time

I’ve reached out to some engineering contacts I’ve made at Span and they are support of the integration work I’ve done and maintaining and open API for such 3rd party integrations.

Amazing,
Installed the hacs integration and it’s reporting! I appreciate the work, thank you!

Incredible. Getting panels and solar installed soon, will report back as I’m super excited to be able to add this data into HA and do some smart things. You rock.

I’ve installed the HACS integration, but after entering the IP Address of the SPAN panel I get an error from the integration stating simply “Unknown Error Occurred”. I guess this is because the API functionality for my installation has not been turned on.

I spoke to a tech support individual at SPAN who was not aware of the API, but is looking into it.

I’ll update when I get more info.

Can you post what firmware version your Span is running? Mine is spanos2/r202223/03, which is likely newer than the spanos2/r202216/04 which the API was last documented against. I’ve got a pull request open on the repo to update this, along with bringing compatibility with the Energy tab.