Hi Guys,
We really need a good official solution to get the backups automated AND automatically off of the device.

I know this is a can of worms with the options for ‘destinations’ but something really does needs to be done had has been requested many time over the years.

I think a good clean start might be to a local NAS or other network share requiring ip/dns name, u/n and p/w easily configurable from the ui

I strongly feel this is more than a feature request, it is a requirement of any modern device or appliance with complex configs and custom scripts, automations and logging history.

There are many discussions on this topic in various threads all with unsupported and or incomplete examples, but I would only trust an official route on this important and necessary issue.

Many thanks guys/gals keep up the good work

Other requests on the same subject with simular requirements

A backup tool, with automated schedule, excluding db files (since they are usually large) Feature Requests

I’ve recently upgraded to OS 5.9, and during this upgrade my system got stuck. I had to reboot the hosting Pi by unplugging the powercord, and luckely the system came up again. This made me realize that I didn’t make a backup, and I was scared as hell that I could start all over again…

So, my feature request is like so; Do not allow doing an upgrade of the Os or HA unless you have recently (this day, last 24 hours), made a backup. Ofcourse you can make a ‘override’ checkbox for if y…

Hi all, I would highly appreciate having a way to backup my config folder to Nextcloud with auto backup and manual backup possibility.

To help restore HA after a SD card/memory/system failure, or even an update gone wrong. Feature 1 - allow configuration of backup to dropbox (or similar) via UI. (perhaps as an Addon) 2 - allow this to be configured as part of install (cause lets be honest no one realises they need this until it’s too late). 3 - allow restore from backup option in install.

I think it’d be wise to restructure homeassistant’s config folder into three (maybe more depending on need) subfolders: config_pub, config_private, and dynamic. In addition I suggested we completely eliminate the .storage folder. These changes will make it much easier to determine what files are valuable and public, valuable and private, and not valuable for creating backups. Here’s my reasoning: right now when I go to where /configis in my docker installed ha-core instance I see a ton of diffe…

Backups: do not back up addon images, just configs Feature Requests

With HA-Cloud you could easily create encrypted backup/restore of entire HA configuration (maybe even with selective restore) to Google Drive’s Device Backup feature (the same way WhatsApp does).

There is a way to back up to Drop Box but I can’t seem to find one for iCloud. Are there any programmers who are interested in making this? I think it would be useful to many people. Thank you.

Considering how easily the YAML files can be used to recreate a HA configuration, it would be great to see a component similar to the updater component that could be enabled to backup the known_devices.yaml and configuration.yaml files to a dropbox service… example yaml entry … backup: platform: dropbox api token: dkjfheubdklnfndsdkfj something along those lines would be great for the casual users to protect their HA configurations. There seems to be some prebuilt stuff that should be a pr…

What about when we do and update could HA take a snapshot first and name it bk-62.1to63.0

Like many here, my db file grows by hundreds of MB per day and would not be needed in the case of a Restore. Regular snapshots should be a habit for HA users and easily bypassing the database file would dramatically facilitate and expedite this. Carrying on the discussion from here, I am requesting an option for the Snapshot function that excludes the home-assistant_v2.db file. Having unsuccessfully fought with relocating the database and with implementing MariaDB solely to allow for snapshots …

I think a good feature to make the $5 per month more bearable would be an option for configuration backups to the cloud.

What do you need more ? 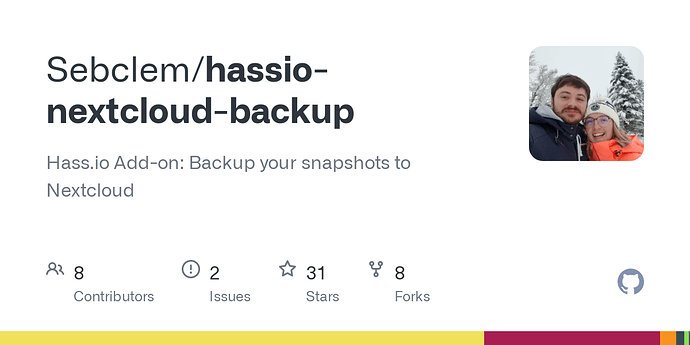 I also do not want a 3rd party to be responsible for the security and integrity of my data.

Robust backup and recovery should be at the centre of ANY device or appliance and built into the core.

Thanks for the input.

i getting these backup

Thanks, but I DO NOT want a 3rd party Add-On

Have you read the issues for Samba Backup

Hi I just have a question. After bacup restauration it was a problem with Backup of Mariadb files. So is there a...

then this leading onto

MariaDB does not recover from HASS.io backup

The HA team doesn’t NEED to do anything just because you say so you.

I was pointing out that there are underlying issues in the existing backup processes that are open and known issues within Home Assistant. so any 3rd party add-on will in inherent these flaws that use the Home Assistant snapshots or API’s

and surly backup is an absolutely necessary, required and should be one of the first things configured/setup and tested.

Hay bro Ill been do this for over 4 year lost count on the number of time I have done a recovery form backup most of the recovery was cause i broke it. and bad SDCARD using a second hand hard drive once I move to a SSD and an real PC HA has not let me down