I have an interesting situation using ONVIF Integration with my surveillance cameras.
I have 3 HIKVision cameras that I have set up on my dashboard and they come up great.
I also have Nabu Casa and these camera entities are exposed to my Google Nest Hub.
When I ask my Nest Hub to show me the live stream it comes up rotated 90 degrees clockwise.

Can anyone help me wit this please?

If you’re using ONVIF through the GUI, try clicking on ‘Options’ and checking the ‘Extra FFMPEG arguments’ ?

I did that and they all have this 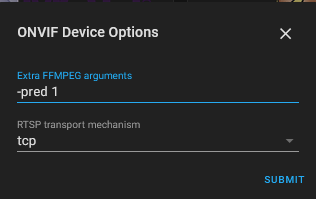 I have no idea what this means.
Can you enlighten me what it should be please?

I’m not very good at deciphering it either, I’ve tried but there arent any clear guides anywhere. However, I can confirm that there are no arguments in there that are rotating your image currently.

Thank you.
I did find this site https://ffmpeg.org/ but not much the wiser.

The native jpeg 2000 encoder is lossy by default, the -q:v option can be used to set the encoding quality. Lossless encoding can be selected with -pred 1 .

for what that’s worth… I don’t think this addresses the issue in this thread. I can see how this might be useful to have a lossless encoding when doing motion detection between frames, which might be the original context of the recommendation.

I just upgraded to 118.4 and no change. I did try changing the FFMPEG option to autorotation and noautorotation but it had no effect.

An after thought…
I still have one older Foscam camera where the ONVIF implementation on the camera was too old to work properly so it’s still using the Foscam configuration in the configuration.yaml.
It has the correct orientation when shown on the Nest hub. It’s only the cameras which use the ONVIF integration or so it would appear.???

Some 8 hours later
I looked and I still had the FOSCAM camera included in the ONVIF integration so I exposed it to NABU CASA. It is oriented correctly?
The only differences I can see are:

Thank you for the info.
I had stumbled across that fact a little while ago.
I now have 3 streams available from my cameras.
Stream 1 as H265 and main stream High Res for Live View in Surveillance Station
Stream 2 as sub stream and limited to 480P and use H264 for HA as HA won’t talk H265
Stream 3 as 720P and H265