Just to share my findings with RLC 510 (WA) and AI detection. After installing the cameras some weeks ago, I noticed that the reolink_dev integration started to expose the person/vehicle/pet AI detection, I think those sensors were not there when I first installed it and set up the cams (or maybe they were there but not working). In any case, I started to experiment, I have a few light automations based on the cameras’ motion detection, that were getting tons of false positives due to bugs at night.

I was reading here about some people getting AI events with the integration, and others doing aggressive REST polling continously etc. The AI events were not working with any of my cams and I thought that aggressive cam polling wasn’t a great approach - but I also noticed that the cams where claiming to be running the “latest firmware version” when checking with the android app but that version was from January this year, which was weird.

Long story short, the firmware version checker in the cams wasn’t working at all. I realized I could download a far newer firmware release, and update the cams via the web interface (the android app would refuse to update the cams either manually or automatically).

After upgrading the cams manually to version 3.0.0.494, the AI binary sensors from the integration started to work. I could then crank up the sensitivity of the detection and fire the light automations based on person detection only. This seems to work pretty well for my purposes. No more lights turning on in the middle of the night

, and fairly quick lights turn-on when stepping outside to the backyard or approaching the garage door.

These sensors are clearly not reliable enough for firing a true alarm/siren, but for controlling lights they do fit the bill quite well.

I was able to get this working as well. I had to do a manual firmware update. Via the app did not work. It said that the device is already to the latest firmware same when using the web client’s auto update. I needed to download the latest version of firmware and do it manually. Cameras are not detecting motion in home assistant but I do agree that it has some delay. maybe as long as 15-30 sec is not more.

Hi! A couple of questions to you. I’m really excited that you got this to work. I’ve been drooling on a reolink camera or 3 for a long time now.

I can speak for question 4 about opening the reolink app from a notification, and can confirm you can do that on Android, but not IOS i beleive. I have a snapshot that is captured when person is detected, with an actionable notification that has an option to open the reolink app and it works well

for question number 3:
i am using the picture option:

according to the description you can also change this into video:

Hi all
After upgrading firmware RLC 510 (WA) and after setting up nginx for local http the reolink_dev works quite well for me. Have now many automations based on detection. However some Issues I found and also I miss some documentation to some settings.
Like many of you I’m mainly interested in Person detection only, so I setup Email options to send Person detection only.
I wanted to use the Email-switch to deactivate mail during Day. However If I switch via HA from off to on again, settings are changed to “Any Motion” with all timeslots disabled.

Some question about the setup, I didnt find explanations about an option.

It took me also a while to find out that the files seen in the Media Browser are mounted from the Camera. (was initially searching the entire HA for the files…

Looking to see if anyone had any luck controlling the Siren on RLC-811A et al? This is as far as I got:

I clearly need to provide arguments to this call that are missing. I don’t know which those might be or how to figure them out. I searched the camera firmware for AudioAlarmPlay using strings, hoping that would reveal some more about possible arguments, but that didn’t give me any hits. Looking at the strings output, the firmware is clearly scrambled somehow.

Same research here… Did you find anything about the post body to play the siren?

Nope, sadly not. The only resource I was able to find was this french speaking forum mentioning the command: 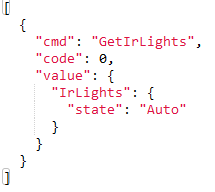 I do not speak french, but if Google translate is correct they don’t have any more details than the command name itself either.

I was also able to find a few (apparently) leaked internal Reolink API docs that describe most of the API surface including arguments. However, AudioAlarmPlay does is not listed on them. They seem to be a little older and AudioAlarmPlay may have been a more recent addition (I think their older cameras do not have any sirens).

Some ideas I had what the parameters might be related to:

I haven’t done a very thorough exploration of those yet though. The mobile app has an option to sound the alarm, which most likely calls into this API. Maybe there’s a way to reverse engineers this through the mobile app somehow.

I tried to sniff the packets but the content is encrypted and changes depending on the token assigned at login (which expires…).

I tried to figure out what was the content but I still didn’t manage to understand.

Oh wow, awesome! Thanks for sharing!

I’m curious how you got that? It seems way to complex to have just guessed. Did you figure out to remove the encryption/mangling from the app payload? Feel free to share via message if you don’t want to disclose publicly.

Both the "action": 0 and "times": 1 parameters do not seem necessary. Dropping them seems to work the same way, at least for my cameras.

Hi
I got some Reolink cameras on black Friday and using HACS integration it’s working OK accept I can not get the live view working, what I have so far it updates every 10seconds
Any help would be appreciated.
Thanks

Hi,
I’m trying your solution, the resource URL is ok but i’ve got an error verifying the code that I’ve copied in my sensor.yaml