I have an US Electrical Panel, and as the time of this writing the Shelly EM is being reference by 120v on one of the legs of the split 240. Since A = W/V If I reference 120V I will get higher amps than 240V my question is, to what do I reference the Shelly EM, Do I leave it connected as it is 120V (Line and Neutral) or should I reference it to 240V in order to get an accurate Amps consumption at home?

Thanks for your help!

The Shelly has to be powered with 120V, as it requires line+neutral, not line+line, for powering.

This results in a problem, though, if you’ve only used one clamp to monitor a 240V split-phase circuit (like the main coming into a panel, or a 240V device). The Shelly will measure the voltage of that phase, and the current consumed on that phase, but it doesn’t report amperage it reports wattage (the multiplication, as you pointed out), and the wattage report will be wrong since the working voltage does not match the device’s actual working voltage.

I’ve got a Shelly EM monitoring the power feed to two HVAC heat pumps (one leg each), and I suspect the current consumption being reported is half of what it really should be.

I found this article especially relevant; it confirmed my theory that if the load/circuit is a 240V circuit, and you only measure one leg using a CT, you have to double the reported power consumption.

Since the Shelly does not offer an option to do this internally, I’ll think about adding a feature to the integration to allow the user to scale the readings before they are fed into HA.

I gave up on the ‘complex’ solutions, and just created template sensors to adjust the readings in HA. This means the data is only correct in HA, and not in the Shelly web app/mobile app, but that’s sufficient for me.

I think you’re supposed to measure both legs. If you only measure one side, you’re only measuring half the load.

On a side note… Do you know what size wire you have? I’ve been wanting to get one of these but I’m not sure it will work with my 4/0 ALM wire feeding the main breaker on mine.

You need to measure both legs if the load is unbalanced, but a pure 240V load really can’t be unbalanced (a 120V/240V load can be).

I’m not using this to measure a main feed, just HVAC heat pumps and other devices on 20A-30A circuits using 50A CT clamps. If you want to measure your main feed, and it’s 4/0 ALM, then you probably have 200A service and the Shelly CT clamps won’t be sufficient since the largest they offer is 120A.

I do have a 200A service. I was afraid the CT clamps would not be enough. I do want to get something that will monitor the whole home though, rather than just some circuits.

The CTs they supply will not work with large wire. I think they would MAYBE fit over an #2 AWG wire, maximum. You would need to find a larger CT that still provides the same turns ratio as well as output current.
One solution for the US split-phase 240v equipment is to have the two line leads both go through the CT, but ensure that they enter the transformer from opposite directions. Since each Line is 180 degrees out of phase to the other, reversing its route through the CT reverses its phase. Then the CT will read total current correctly.
The bigger problem for me is how to get the Shelly device to quit using 120v in its power calculations.

Wow… #2 AWG is definitely not large enough, this may barely cover a 100A service in the US

That explains it.
Thanks

I know this is an old post but I cannot find anything else that comes close to what I’m trying to accomplish.

I purchased the Shelly EM to monitor four solar strings on a grid tied system.
Of course, I’ve run into the same problem as others have, not being able to monitor two legs of a single phase service. However, I’m not really interested in monitoring the 240 service so much as I’d like to monitor what each of the four the strings are putting out.

Each string however is connected to a 240VAC breaker so I end up with the same problem as if I wanted to monitor the total output of a 240VAC circuit.

Bit confused on how I can accomplish this and after reading countless posts on the Internet, I thought I’d ask here since there are some who have achieved this.

Then I came across what you said. Can you expand on this a bit.

Even if you do that, the wattage reported by the Shelly (both instantaneous and lifetime) will be incorrect because the sensed current will be multiplied by 120V, which means it will be 50% of what it should be.

If you can’t monitor both legs of the circuit, and you are certain that the circuit will always be balanced (same current/voltage on both legs, within reason), then just monitor one leg and create template sensors in HA to double the reported numbers.

Hi, thanks for your reply. The voltage will not always be balanced and even since some of the panels will get shading while others won’t so the output is constantly changing.

I really don’t understand the Shelly EM and how it can be used.

I see that it can be powered between 120VAC and 240VAC but how is that possible when there are only two power input leads.

I would be very surprised if your inverters provided significantly different voltage on one leg vs. the other leg. They also should produce nearly the same current on both legs too; shading and other variables are effects that are upstream of the inverters; once the power has been converted to AC it should be relatively balanced at all times.

I just realized we are probably using the term balanced differently.

When I say balanced I mean the two legs of the circuit attached to a string of panels (and their inverter(s)) will be approximately the same voltage at all times, and will very likely see the same current flow at all times as well (although this depends on the current consumers of course).

Hi, sorry for not responding. Not getting the emails.
I appreciate your input but I think there are some terms I’m not using correctly.

Correct, I mean the four strings would not be outputting the exact same amount at any time.
Yes, all four strings are connected to one panel with a 240VAC connection to the utility meter that runs backwards.

I’m trying to find a way of monitoring each string separately.
I figure that when there is no sunlight, I’ll have a fixed base to start from which would be the power from the utility since it’s a grid tied system. When there is sunlight, I would see the difference above that base and would extract what I’ve generated. Basically, building a chart over time.

Since all four strings are tied into two legs of the 240VAC utility, it sounds like you’re saying there would not really be any way of monitoring each string, only the total and not with this device.

LOL, just can’t seem to find a way to monitor this thing.
Would the pro version do the trick?

I found this which seems interesting. 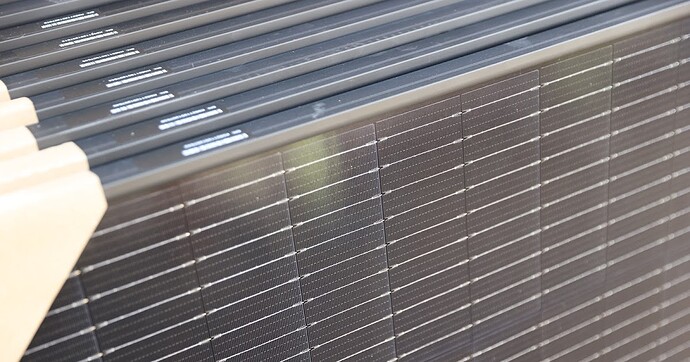 I finally have a solar install, and a battery on order. So this blog is the first one on this - I don't have a lot of data yet as it just we...

Read  part 1  for more background. See my blog on power monitoring . I installed monitoring for power usage a few months ago. This is using ...

What a weird and useless rule? New members can only post three times in a thread? The idea of throttling users is to make sure they aren’t spammers. It should not be to frustrate them into leaving.

I think we’re out of sync :).
The main thing I’m trying to understand and or do is to monitor both legs of the 240VAC.
It seems that is not possible with this shelly device as I would have to double the reading which is not accurate in my mind.

Since this is the case, I would need to use another model of the shelly that would allow me to do what I need or some other brand. I don’t know which model might handle what I need.

More importantly, I don’t understand why the shelly EM has two CTs since I can only use one. The marketing seemed to imply I could monitor 240VAC circuits but that doesn’t seem to be the case.

What is the point of this EM then? What can I use it for with two CT’s?

I have something called ‘current cost’ which comes with two CT’s and that’s always worked perfectly, showing the correct output which I can confirm since the loads are on UPS’s with their own metering.

I wasn’t trying to say that they can’t be monitored, sorry if you got that impression.

With your configuration, each string will be generating nearly the same current on phase A and phase B of its circuit (also the same voltage on each phase, approximately). You could install four Shelly EMs, one on each phase A of a string circuit, and you’ll be able to monitor the current produced by that string (but you’ll have to double the reported current in HA using a template sensor since the Shelly EM will only be reporting one phase).

Since current will never flow the other direction (toward the string), you don’t need to compute a difference from grid consumption or anything complex like that just to measure your production. If you want to use the Energy Dashboard in HA you will still need metering for your overall grid connection (which will vary between consumption and production).

What type of panels and inverter do you have?