I have been using DM25TE dooya motors and they work flawlessly. Easy to get the code, quite silent and speed adjustable. The highest speed opens up my blinds in less than 30second. DM45F/SK seems to be the perfect replacement. But never seen them sold. I guess they are quite new.

Do you get position feedback in HA?

Mine are one way comnunication. But I am using a custom component and can set position based on time to close and open. no feedback.

Has anyone considered a Shelly 2.5 its only 20 Euro Inc VAT
And it does Roller/Shutter step

If you have AC powered rollers, then these are great. The only reason I ask is for retrofit - so battery/lithium powered. Most are 433MHz.
I found Dooya have a smart hub DD7002B that supports Google, Alexa and IFTTT - and bidirectional communication with all their new motors.

I was just referring the original poster who is said.

So if the RF wasn’t reliable I could revert back to a wired Z-wave Controller, I was thinking of using a [Fibaro Roller Shutter but they are £50 just for the controller, which bumps the price quite a lot. So I thought I will try the RF route first. I may still go this route when I re-plaster the living room and run the wires in properly which I am doing in a few months.

I had heard about the Broadlink RM Pro (£30 ish) and heard good things about it.

From what I hear shelly do some great gear. But they weren’t available when I set this up. I would definitely buy one and try it. If it removes the hassle of grabbing codes it is worth the money.

Do let us know how it goes if you go down this route.

Thanks to everyone who provided the detailed info above, exactly what I was looking for.

A quick question to those with multiple Dooya curtain motors - can each of the motors be set to respond to different codes? It would seem obvious that they do, particularly with the 15-channel remote that was mentioned above, but I don’t want to buy the wrong one and find that all my curtains open and close at the touch of one button.

Yes. Also one motor can be made to respond to different controllers too.
My balcony has 4 motors, I’ve set the channel 3 to control all at once and channels 4-7 to control individual motors.

That’s good to know, thanks.

I’ve ordered a DT82TV and a Shelly 2.5 to experiment with. If all goes well, I’ll order a few more.

If the Shellys work as expected, then that makes addressing each motor individually or as a group perfectly simple.

Trying to get my bearings in this thread and looking to purchase a set of 4 DT82TN. 3 will be for one room and 1 for another directly below on the second floor. The 3 can just be controlled on the same channel and the 1 on another so I really think I only need 2 channels. That said, I had a few questions if anyone is kind enough to answer:

The Shelly 2.5 is not voltage-free, it sends mains voltage through the relays.

I have this working flawlessly with the Dooya curtain motor that I had delivered the other day, I’ll be writing a full explanation of how it works when I get a chance…

For now, there are a few things worth knowing:

There are subtle differences between the different Dooya motors. If you are thinking of using a Shelly 2.5 to control the curtains (and I’d say it’s a bullet-proof solution), I’d suggest the DT82TV.

This explains the differences: 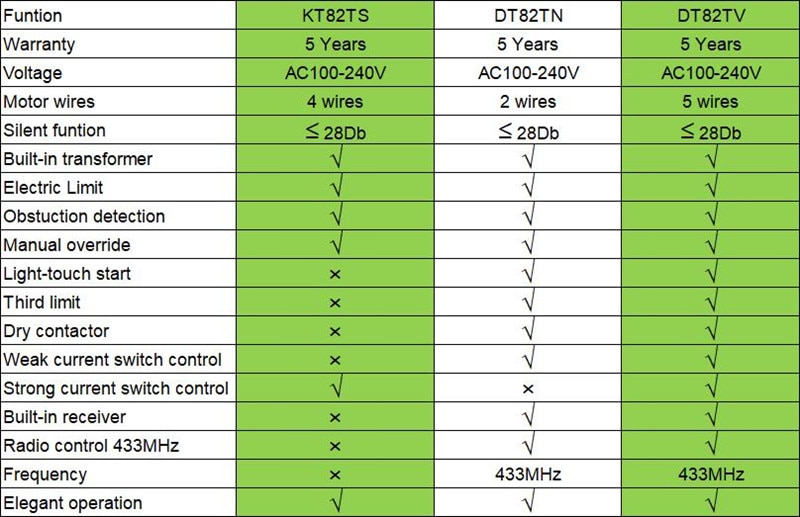 The DT82TV has 5 wires which are as follows:
3 for power/earth (live, neutral, earth).
2 as signal wires for opening and closing the curtains.

The 2 signal wires can be connected to the Shelly to tell the motor to open or close the curtains.

I have the Shelly set up to receive MQTT messages to open or close the curtains whenever my automation tells it to. Beyond that, you can use the remote that comes with the motor. Further still, I have a simple switch on the wall that triggers the Shelly switch inputs and opens or closes the curtains.

As I said, I’ll explain further how it’s all set up, but hopefully that helps.

As promised, here is the route I’ve ended up taking, inspired be Chris Wolsey’s efforts above.

I also bought a Dooya DT82TV from Friend Industry Holding Co. Ltd on AliExpress. An easy buy, although the seller used TNT/FedEx for the shipping which, whilst quick, has left me with an argument over the £24 they arbitrarily charge for handling the customs clearance. Anyway…

I chose this motor because it has 5 wires which allow mains voltage control of the open/close function from the Shelly 2.5.

The curtain tracks are good, although I chose wall brackets and the ones supplied are not very well though-out. I’ll be using different brackets eventually to tidy up the installation.

I have wired up everything as below (UK wiring): The switch shown to the right of the Shelly is a momentary wall switch, such as this one - https://www.tlc-direct.co.uk/Products/MKK4878P.html

I have set up the Shelly 2.5 as follows:
I am using my home MQTT broker instead of the Shelly cloud.
The switch is set as “detached” so that it simply sends MQTT messages when it is pressed.

The MQTT messages are all processed by Node-RED, which I use for all of my automation rules (I find it far more versatile and user-friendly than Home Assistant).

The curtains are also supplied with an RF remote, which is how many people have automated the curtains, although mine isn’t used at all. The Shelly seems perfectly reliable and is hard-wired to the curtain motor. As long as my home WiFi is working, the automation is bullet-proof. The wall switch is, for me, a better installation than having a remote rattling around, requiring batteries and getting misplaced.

Obviously, all of the automation can be done in Home Assistant instead, although my HA is just used as a front-end for the rules that Node-RED takes care of. This is just personal preference.

All in all, I’d definitely recommend this setup, I’m well pleased with it. Let me know if you have any thoughts or questions.

i have just received my Dooya DM25LEU and the DC2702 (15 channels) associated remote, and considering how long it took me to retrieve the RF code with the BRoadlink RM Pro, it thought I would share them. This could be helpful for one of you and I have to admit that I would have appreciated to find them myself. Other than this headache to retrieve the codes I have to admit that I’m impressed by the quality of the product considering the price.
In case you are wondering how to retrieve RF codes yourself with the RM Pro, I have finally found and used this tutorial : Guide: How to learn broadlink RF codes

And the rest of the codes :

Hi Chrismox, maybe you can help me, I have 21 DT82TV installed in my house with 21 Shelly 2.5’s controlling them - all this is being controlled and automated by HA. They work flawlessly and I’m really happy with them, my only issue is that on the shelly it doesn’t show any wattage usage which leads to the problem that I can’t calibrate them (as the way shelly works is it measures voltage). I’ve asked this question in the shelly groups and Dmitri the CEO claims that because of the 5 wires or some internal motor configuration there might be an additional relay which is abstracting the voltage to the Shelly… sounds a little off to me - since you have a similar setup I wanted to know if you are seeing watt usage in the shelly app and are able to calibrate. Thanks so much

I’m not sure I can help, sorry. When I set mine up, I simply worked out roughly how long the curtains took to open or close and made sure that I just had the Shelly activated for that amount of time plus a few seconds.

I’d check to see what wattage mine are reporting, but they’re currently out of action while I’m redecorating.

Good luck, let me know if you have any success.

Hi, yes I did that as well, but it doesn’t help in the shelly app - as the only way it will do positioning is based on calibration - and since it doesn’t calibrate both the shelly app as well as HA (via shelly4hass) won’t show or allow for positioning. I’m worried that maybe the electrician didn’t hook them up 100% even though they work seamlessly which is why I wanted to know if calibration works by you or if you see wattage usage - even if you are redecorating, can you check in your shelly app on one of the curtains what was total wattage usage over the past year? on my it shows zero…

I haven’t been using the Shelly app, I use Node-RED for all my automations and HA just as a front-end, life is easier this way.

That said, I’ll have a look and let you know if I find anything useful.

In the meantime, I can’t see what the electrician could’ve done to cause you problems. If the curtains are opening and closing, I’d imagine it’s correctly wired.

Where would I find the year’s wattage in the Shelly app?