Does anyone know of an alarm system that meets all the requirements in the title?
Thanks

I have a Texecom alarm with a Texecom connect panel, which exposes all of the sensors so that they’re accessible through their app.

There is an API, so this should be possible, but from a quick read of their docs it’s low-level serial and UDP packets, rather than something RESTful

I wasn’t going to post this until I’d finished but I cut out the middle man and am wiring standard PIRs and smoke detectors to a Pi running flyte’s pi-mqtt-gpio via a custom breakout board. 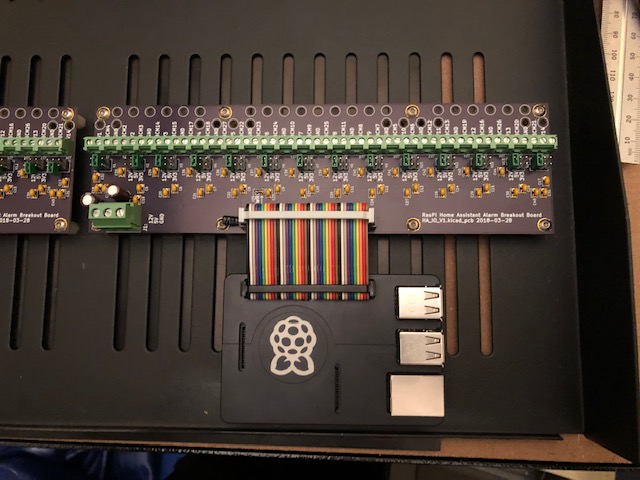 The breakout board has selectable 3.3/5/12V and ground terminals adjacent to each GPIO and also supplies 5V to the Pi. If you are interested the board is on OSH Park. Probably best to wait until I’ve tested it fully though. They’re not cheap. $90 AUD for 3 boards + components.

I have a dual rail 125W 12V 5V power supply on a 19" rack shelf I’ve been load testing to supply the breakout boards and for plug pack replacement for a lot of other devices in the rack.

@tom_l That looks like a really interesting project! Will you do a write up when complete?

Sure - assuming it works

That looks awesome! Did you ever write this project? I’d love to take a look.

I’m in the middle of publishing my solution. It’s a library I use to read the serial data using a Particle Photon. It reports changes in the alarm state including sensors and state. It’s also able to arm and disarm the system.

It will be completed and documented in the next few days. I did. Have a look here:

I have finally finished my Raspi GPIO interface boards. Going by the date on the PCB I started this in March last year. What it is: Two identical custom PCBs, one for a Raspberry Pi running Home Assistant that interfaces GPIOs to outputs and one for a Raspberry Pi running an MQTT client for inputs. It was done this way because the HA GPIO binary sensor (input) is rubbish but the GPIO switch component (output) works fine. Also because I have more wired sensors than one Pi’s number of GPIOs. The…

Does anyone have experience with Pyronix UK alarm systems?

Pyronix is a market leading designer and manufacturer of security products and technologies for the global security industry.

I have one! It used to be called Castle, then rebranded to Pyronix which was later purchased by Hikvision. I must say that besides an integration with Hik-connect app, Pyronix and Hikvision have very little in common. App is terrible, it takes amount 30 seconds to login to your alarm panel, 40% of the time connection just fails and they only allow a single user to “dial” into the panel at the same time.

You do get a push notification whenever alarm is set, unset or goes off. The way I integrated it with HA is I have an old Nexus 5 phone which receives those push notifications and turns input_booleans on or off via Automagic app (same as Tasker but allows you to send custom HTTP headers which you need for passing long-lived token).

Sorry to bring life back to this old thread but I also have a Pyronix alarm which I am hoping to integrate into HA. Is this still the way you are doing it?

I’m afraid it is the only way I found so far. Pyronix is a pain to use, it hurts every time I have to open that app.

OK thanks, I’m new to all this so I’m going to have learn a fair amount before I can even understand what you do! If you have any more pointers for newbie that would be great.

I had mine installed now. One possible approach, other than the app, is to mimic one of the key fobs, which I assume use RF. However these may use encryption, so could be a technical challenge. Alternatively you could probably rip the fob apart and create some custom circuitware to control it

That was my idea as well back in the day. It does look like the fob not only sends the signal out but also receives it, as the LED flashes red while setting and becomes green when alarm is set. Perhaps one could use an ESP32 and wire all buttons and an LED. I am not sure is the fob is also receiving anything when alarm is been set/unset not from the fob.

I’ve just tried setting the alarm from the panel and the LED on the phone did not blink, so it is not as strait-forward as wiring GIP to buttons and an LED.

Actually, reading the manual it does look like you could program one of the four buttons to return the status of the alarm (boolean only):

This could be used for polling the status, one would not know which of the zones is set though.

Looks like Automagic is no more. according to this

I don’t have an old android device any way…

The only reason I moved from Tasker to Automagic was because Tasker did not have an ability to specify custom HTTP headers, perhaps it can do it now. You could install an Android emulator to play with it if you fancy.

Thank you for the tips, I’m on day one of HA so have a few easier projects first, but that is definitely one for the future.

Tasker did not have an ability to specify custom HTTP headers, perhaps it can do it now