I have a 6 zone HTD whole-house audio amplifier (which I can control through Home Assistant), and previously have used with an Alexa-based music setup. Now, we are whole-hog into Apple services (we have an Apple One+ subscription which includes, among other things, Apple Music, which is way better than Amazon music for us) and everyone who is in our house uses iPhones, Apple Watches, etc…so we want to move to an AirPlay-based system.

I know I can setup a Raspberry Pi as an AirPlay receiver, and that there are ways to tie together multiple AirPlay speakers into a “whole house” setup. However, what I’m trying to figure out is how I can emulate AirPlay on top of this amp I already have, so my people don’t have to hop between apps (Apple Music and Home Assistant) just to turn on speakers or adjust a zone’s volume.

Kind of like how AirCast emulates AirPlay on top of Chromecast, but instead on these HTD zones (each of which is seen as a media player in Home Assistant).

I’m willing to dedicate a Raspberry Pi to this endeavor, but I’d rather not buy six of them (one for each zone). I also have a server (running Windows and Home Assistant in a Virtual Box container) if that helps anything. Is there any way to create “AirPlay interfaces” in Home Assistant that I can use with automations to control my multi-zone amp, to proxy power and volume control?

To be clear: I don’t need the actual audio to be streamed on these “virtual AirPlay” devices. The audio is already happening via an actual AirPlay receiver called “whole house”, which in turn is piped into the whole house audio controller. What I’m trying to achieve is for people to select which zones they want to turn on via the AirPlay panel on an iPhone, and control each zone’s volume, without having to switch apps.

What did you end up doing?

For me, I created a shortcut in Apple shortcuts to connect to Airplay and open whatever app I wanted, and then put that button with the speakers in Home Assistant.

It looks like this (well, not usually, I’m re-doing the HTD Lync12 setup since I found a custom integration someone built). 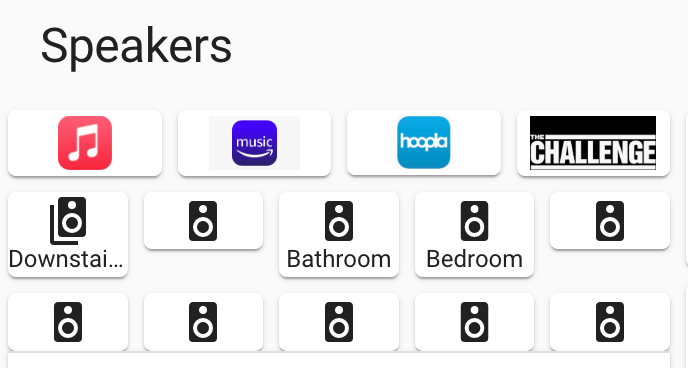