For some spoken notifications I recently switched back from an unofficial Google Home Broadcast function, to Home Assistant’s built-in TTS feature. While that works great, it would be even better if it did not cancel and replace the music that was playing before it, but just resumed it afterwards, like the broadcast function did.

I’ve found some awesome, but quite complicated scripts that allow me to do this, but think that this would be a really helpful feature to be in HA itself. A tts-call with resume: true as a variable for example would make this a lot easier.

It would be nice if the music kept playing but the volume “ducks” while the announcement occurs.

You get that feature with Google Homes and Chromecasts. I really like how it keeps audio flowing.

Playing two things at a time may require support from your hardware, as what home assistant basically does is tell your hardware (e.g. Sonos) which source to play. If the given hardware can’t play two sources at the same time (or does not support that in their API), it needs to stop playing music (temporarily) to play the TTS mp3.

FWIW, the media_player.play_media service call has an announce option. 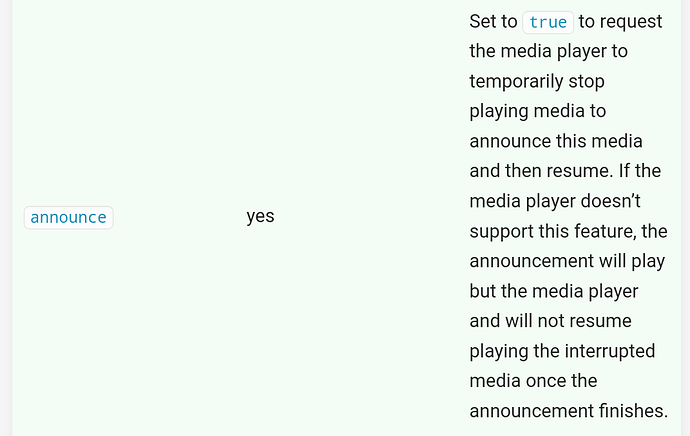 However, it only works for devices that support this capability and that have been implemented in the device’s integration. I believe the option currently only supports Google Home/Chromecast.

While two things at a time would be the best outcome, I understand that that requires support from the media player. I’m perfectly happy with a one-after-the-other solution that just continues the media that was playing before the announcement.

From what I understand from the creator of the script and automation that resumes media automatically after a tts-message, the announce parameter is used in tts-calls in home assistant. That is how his automation knows when to trigger.

That script employs the announce option of the media_player.play_media service call.

I use it in my Google Home resume script, but that is not the script you linked to.

No, I use it in another script, well actually an automation, which will trigger my script in case the announce flag is set

Script to resume Google Cast devices after they have been interrupted by any action Share your Projects!

Description A script to send actions to Google Cast devices, resume what was playing afterwards and restore the previous volume in case the volume was changed. Note: Only service calls are supported, but you can call a script in a service call, so other actions can be performed by calling a script. This script supports Resuming of TuneIn, Spotify, YouTube (only for players with screen) YouTube music (only if custom integration is used), Music Assistant, Google Podcast and generic streams af…

Where in that script is it using the TTS integration?

Not, unless the TTS integration is used as an action.
In the automation also linked there I use the service call media_player.play_media as trigger and I check for announce: true

Then duncank claimed your script uses announce in “tts-calls”. That appears to be a misinterpretation on duncank’s part because your script doesn’t employ the TTS integration; it uses the media_player integration because it’s currently the only one that supports announce.

If TTS did support announce then we could do this:

I wasn’t aware that the TTS integration’s tts.google_translate_say spawns a call to media_player.play_media with announce: true. Therefore the TTS integration implicitly support the announce feature. Thanks to TheFes for explaining this to me.

Therefore your script, and correct me if I’m wrong (because I don’t have the time to review hundreds of lines of script code) goes through the usual procedure of creating/restoring a snapshot plus some clever bit of listening for a service call event.

What it’s not doing is this (because it doesn’t exist):

No, you are totally missing my point.
The anounce: true option is not needed on the TTS Servicd call
ALL TTS messages are already sent to the receiving entity with anounce: true

Check for yourself by listening to the call_service event and sending a TTS message.
You will first see the event that the TTS service call is issued, but after that you will see a media_player.play_media service call with announce: true

ALL TTS messages are already sent to the receiving entity with anounce: true

Check for yourself by listening to the call_service event and sending a TTS message.
You will first see the event that the TTS service call is issued, but after that you will see a media_player.play_media service call with announce: true

Thanks for clearing that up, I appreciate it; I didn’t know it did that.

I can confirm that calling tts.google_translate_say spawns a call to media_player.play_media with announce: true.

While performing the test, I discovered that my Chromecast-compatible device (a non-Google device that behaves like a Google Home Mini) doesn’t produce the desired result with the announce option; it never resumes playing the original music.

Not sure why it fails to resume music for all three tests (other than to conclude it’s not 100% Chromecast compatible). I don’t have a Google-branded device to perform a comparative test.

FWIW, I repeated the experiment with a Sonos speaker and got the same result but I knew in advance it wouldn’t work because the announce feature is not implemented for the Sonos integration.

FWIW, the media_player.play_media service call has an announce option.

However, it only works for devices that support this capability and that have been implemented in the device’s integration. I believe the option currently only supports Google Home/Chromecast.

So maybe the easy way to solve this for other devices which don’t natively support it at the hardware/api level is to provide a default implementation in media_player triggered by a play_media call with announce: true on a media player that doesn’t natively support resuming audio after announcement, which would:

It’s possible that the media_player interface is too generic/abstract to do this, but in that case we could add it to several of the more popular media player integrations.

I imagine this is more or less how the

awesome, but quite complicated scripts

The music provider service playing on the cast device will have to support it. If you play something with Music Assistant, it will be resumed. 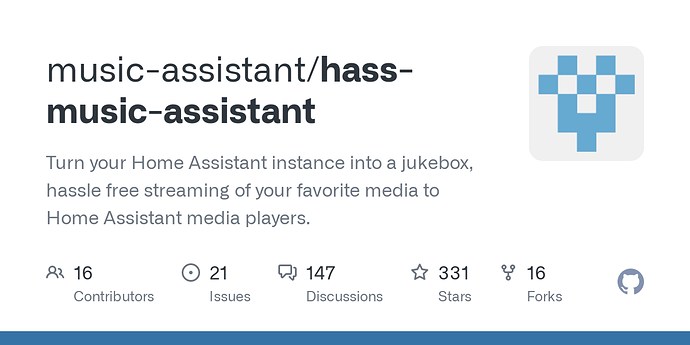 I tested the Chromecast device just for the purpose of exploring the announce feature in this topic. Normally I don’t use it for daily operations. Nevertheless, I appreciate the link to Marcel’s Music Assistant (I was aware of it but use other means to play music and announcements).

FWIW, I use a script for playing announcements to Sonos speakers. It sends the text message to a local Windows machine where an application uses SAPI to convert it from text to speech (so TTS conversion isn’t cloud dependent and uses a high quality local service). It informs Home Assistant when the audio file is ready and then Home Assistant plays it on the chosen Sonos speakers. The speakers are snapshotted, paused, re-grouped in the desired manner, the audio file is played, then the snapshot is restored. It also has the ability to avoid re-grouping the speakers if they are already grouped in the desired way. The whole process takes about 2 seconds where most of the time is in re-grouping the speakers.

If only that snapshot feature would be possible on cast devices