Hello,
i am installing a new heating at home.
after completion i will have 6 water radiators in my flat.
i am going to controll them over Homeassistant in a RasperryPi3, which is at the moment only controlling the lights.
Which Thermostat should i buy, which is working with homeassistant? Any Experience in the german market?

A little search. Anyways you might look for wifi thermostat valve as well.

Sry,
no i mean the thermostat at the radiator in the different rooms, not at the main-boiler/heater!

Farnell sells some bluetooth enabled radiator valves for about 30 euros a piece. If they are not too far away from your pi, you should be able to control them with HA over BT.

E.g. this one
Or the amazon deal which is significantly cheaper

But have try to search with those keywords. Perhaps might be more of influence if you search in Germany keywords to find the local products.
https://www.tado.com/de-en/products/smart-radiator-valve
or
https://www.popp.eu/thermostat/
I think that the price might be higher for those with standard WiFi 2.4 GHz.

I tried the equiva bluetooth models, but they are unreliable. I can recommend the following models if you already own a FritzBox: 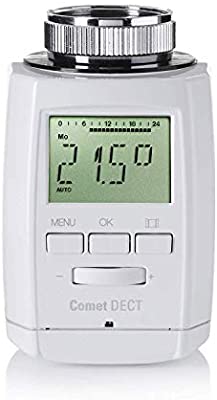 They are regular on sale.

I tried the equiva bluetooth models, but they are unreliable

Could you explain what issues you were facing? I’m also still in the market for a connected radiator valve that isn’t overly expensive.

They are of limited range, by default. I can see my testing with BT devices don’t go beyond a room space.
Therefore to cover an entire house area they might blatantly fail.
Looking for WiFi is the solution that may cover an area wider than the bluetooth would.

How reliable would be perhaps 2 meters LoS? I only need one radiator to be controlled which is about 2 meters, perhaps 3 meters, away from my rPi setup. Would those work for this kind of distance?

I prefer BT since WiFi will burn through batteries a lot faster.

@Wiesl What kind of range are you looking for? (to at least stay on topic for you

From my experiments, the best bluetooth coverage might go up to 7 meters distance, in a open area, which excludes any wall in between.
It is less power hungry, but that is just proportional to the result

Interesting, for my situation it would be ‘good enough’. Thanks for the info!

You might go to the shop and test before you buy. Just use your smartphone from a certain distance.

I’m not sure they are for sale in physical shops in Belgium, at least I’ve never seen any connected valve before, might not be able to do that. Will probably have to buy it in an online shop which has 30d satisfaction guarantee I guess.

Also rpi BT antenna is probably not so strong as the smartphone one, so the link might be reduced (then again you could use a BT usb dongle with a usb extension cable if really needed I guess).

Bottomline, for 2-3 meters line of sight, I hopefully shouldn’t have to worry about BT reliability. I was worrying that some other factor was causing the slightly negative reviews for this device.

The integration in Home Assistant was not stable at all. But it was mostly due to the poor connection quality via Bluetooth. In addition it was only able to connect to one valve at a time.

The dect version has been rock solid for over a year now for me. Battery life is a lot better compared to wifi models. I would still buy them today.

I’ve just installed a eq3 to check it out.

I can talk to it with the Calor BT app but eq3cli doesn’t seem to find it:

Did you run into this? The pi and the eq3 are maybe 3-4 meters appart.

Solved! Apparently OSMC does not by default enable the Pi’s BT adapter. I assumed if BT was off, pybluez would say so.

If you already integrated zigbee2mqtt in your Home Assistant, you can use the Eurotronic Heizkörperthermostat. I use them on all of my radiators except one (just because I had a spare Fritz DECT one and was too cheap to replace it

I used the eq!Max Cube and its thermostats before, and it was a disaster! Neither ioBroker, nor node-red where able to control them reliably. This was not due to my routines, but rather -mostly- to the fact that there is a limit on how often you are “allowed” to control these devices per hour. I don’t remember the exact formula on how to calculate this, but basically the more thermostats you have, the less you can control them in total per hour. Unless you power cycle the MaxCube manually all the time. In it’s defense, I had not used it with Home Assistant (because I had switched to the zigbee thermostats before getting into HASS).

Either way, the zigbee thermostats are way less frustrating; you can auto-discover them via mqtt discover, and everything works out of the box except for settting temperature. But you can do this via input_number and mqtt. I have Xiaomi Aqara sensors on each window, so when I open a window, the thermostat will turn itself down and right back to the previous value when I shut the window again.

If you are using deconz’ phoscon then it should work. I saw an issue on their GitHub page that describes what steps are needed to populate everything.

you mean I have to install this? Althought I live in Ireland, I can recommend the German company http://www.eq-3.de and their HomemaiticIP range of products - https://www.homematic-ip.com/start.html They do wired and wireless solutions and it integrates very well with HA.