I use HA Blue, Home Assistant OS 7.6, core-2022.4.7, have the SSH Terminal add-on installed and normally use samba on my windows-PC to edit configs.

I can restart HA via config → server control
I can stop HA via HA’s SSH terminal ‘ha core stop’
stopping HA care also stops my SSH terminal - hence I’m locked out. To get HA back up I need to cycle power.

How to connect putty to start ha core (without cycling power)

Stopping core does not stop ssh, which is a separate addon.

My Prop is : I can only use the SSH that embedded in HA, the terminal, that one is stopped. I never managed connecting to HA through putty/SSH outside of the embedded HA terminal

How did you type ha core stop then?

In fact how did you connect to the ssh terminal? Something other than putty? 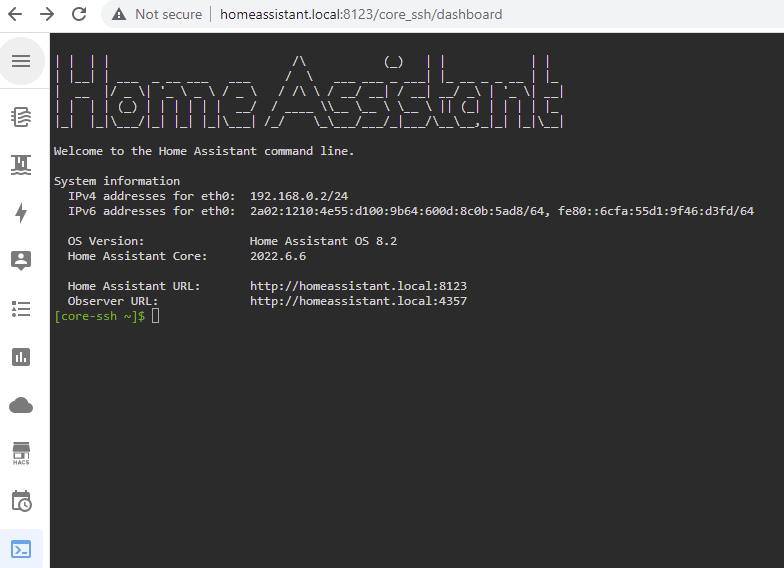 unfortunately I tend to agree. I bought HA-blue because I’m absolutely free of talent for installations, just not my thing. It definitely served that purpose. But no way to get support, even for basic things like connecting putty or HA Core Start from Terminal

Otherwise HA works fine and I got quite a few custom integrations working. Yet as stated in this thread, I feel a bit abandoned with HA blue.

But no way to get support, even for basic things like connecting putty

I feel a bit abandoned with HA blue.

What sort of software or user support were you expecting to get by purchasing a piece of hardware?

These forums are a great place to ask for help and get support. Spend some time doing some searching and reading and if you can’t find the answer, start a new thread.

There should be no reason to have to power cycle the hardware just to restart HA. Unless HA Blue runs totally differently than any other HA install method I’ve seen.

You will get basic linux support here depending on the goodwill of forum posters but you shouldn’t be expecting this from the devs just because you bought a Blue.

Both the threads you point to proceed on the false assumption that stopping core stops the ssh addon. It doesn’t.

Thanks for the replies. I regards HA-blue as a bundle, HW & SW installed. As stated elsewhere, I only managed SSH through the terminal (add-on) within HA. That one stops when I stop HA (or likely more precisely, when stopping HA core also stops the UI)

I failed so far connecting SSH through PUTTY from elsewhere, connection steadfastly refused. 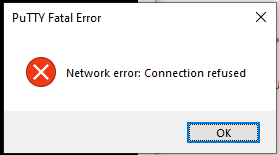 Samba works fine though, so its not a generic network issue. I suspect a setting in HA-blue that’s preventing external SSH, hence my expectation that the seller of a bundle provides minimum guidance or at least some contact.

Is port 22 open on the Blue? (Or whatever port you set in the ssh addon)

Putty works fine with the ssh addon. You have not shown how the addon is configured… 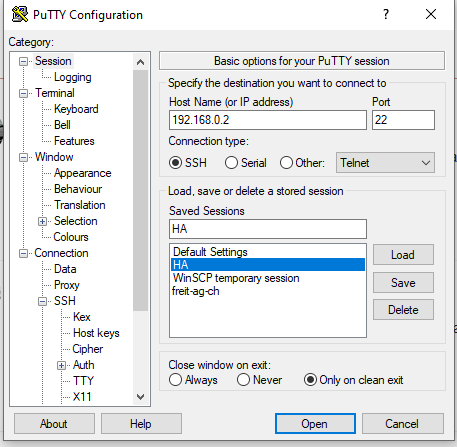 That’s not the addon configuration. Have you installed ssh access to home assistant? It does not come pre installed.

Or if you prefer the CLI - ha host reboot.

That one stops when I stop HA (or likely more precisely, when stopping HA core also stops the UI)

Or are you actually trying to stop core? In that case you have several options:

But no way to get support, even for basic things like connecting putty or HA Core Start from Terminal

Neither of those are basic things. The SSH addons are only available to advanced users. Advanced users are kind of expected to know what they’re doing.

Why do you need SSH access anyway? Sounds like you already have Samba installed and so can edit your config. Restarting HA and rebooting the host are both options in the UI, there’s no reason you have to use the CLI for those.

That’s correct, on supervised all containers run irrespective of the state core is in. That being said, unless your OS runs into trouble.

SSH and Samba add ons have saved me on more than one occasion.