I struggled to find any comprehensive solutions on the Home Assistant forums for fading media player volumes with common attenuation curves. I really don’t like abrupt changes to audio volume, so I put this script together.

This script fades the volume of a target_player media player, starting at it’s current volume_level, to a user-defined target_volume over the user-defined duration in seconds. It also applies one of three curve algorithms to shape the transition of the fade. These algorithms result in a far more natural fade than simply increasing/decreasing volume in linear steps.

For those interested in the code; the script is fully commented, and I’ve put together a quick breakdown of how it works at the bottom of the post.

How to use it

If you have something playing on your media player, you should hear the volume changed based on the settings you entered in the automation.

Below is a more real-world example use-case of the script in action.

This is an example of the script added to an automation in the GUI editor. Here it’s used to gently fade in an audio file as an alarm in the morning.

Here’s a breakdown of what each automation step looks like as the exported yaml code in automations.yaml:

The final automation code that’s exported into automations.yaml would look like this:

f(x) is the instantaneous amplitude added to the original for each step, where x is the normalised time value based on the duration, starting at 0 and ending at 1. 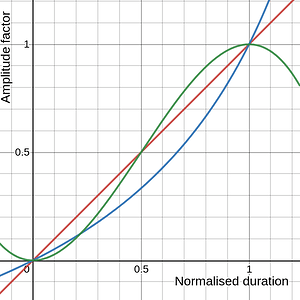 Add this to your Home Assistant config scripts.yaml, and use it anywhere that allows a service call (such as automations):

For the Script Junkies

The script works first calculating the number of total_steps required to fade based on the user-defined duration multiplied by a hard-coded step_duration of 100ms (or 10 per second). For example, a duration of 5 seconds equates to 500 steps.

It determines the difference between the media player’s current volume and the user-defined target_volume. It applies this value as a factor to the shaped fade amount, adds it to the original volume, and applies it to the media player entity volume_level for each step in a while loop.

From what I could gather, Home Assistant calls its services on a 1 second clock. I don’t know the details, however it’s clear that sub-second delay calls aren’t timed perfectly. So don’t expect the fade duration to be perfect. The larger the duration, the more noticeable the duration discrepancy will be.

To make this script duration-accurate, instead of defining total_steps at the start of the script, a steps_left value could be used, defined by the script’s start_time, end_time (which would be fixed), and the current_time for each iteration of the loop. The repeat condition would end at the pre-defined end-time, with the fade amount increasing or decreasing each step depending on if the calls are lagging or ahead… but I’ve already spent way too much time on this, so be my guest 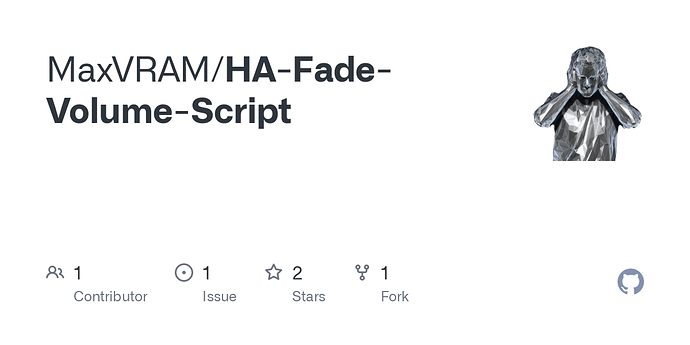 Contribute to MaxVRAM/HA-Fade-Volume-Script development by creating an account on GitHub.

the only thing I would suggest is to show an example of using it in an automation.

likely there are lots of people who won’t have any idea how to pass data to the script.

I’m a newbie to HA and your script and guide covered everything I needed to know to get this working for me, thank you so much!

One question though, is there a way to stop a fade once it has started?

I can’t thank you enough for this. It’s absolutely brilliantl and should be integrated officially into HA. Nice one.

It’s great to hear that the guide got you all the way through, so thanks for sharing the feedback. Yes, it would absolutely be possible to stop the fade - and actually that could be a great addition feature I might add soon.

In the meantime you can add an additional hard-coded condition to the while section in the script sequence to the script on your own HA system.

NOTE: This will add the condition to any and all automations that use this script. To integrate this feature into the script as a user-defined variable, you’d need to add another field into the script include it in the while statement. But let’s just hard-code it now as an example.

Say you had a switch to turn on light.bedroom_light next to your bed and want the morning alarm music to stop fading in when you on the light…

But you can replace light.bedroom_light with any other entity. For instance, you could create an input boolean called input_boolean.i_am_awake that gets triggered by any number of conditions could be used to determine that you’re awake, e.g. phone activity, your phone’s tracked “away” status, etc, etc.

In that case, you’d change the condition value template to {{is_state("input_boolean.i_am_awake", "false")}}.

If you haven’t already discovered the Developer Tools (the hammer icon just above the Configuration button in your sidebar), they can really help to double-check the validity of your script code. Specifically:

The States tab provides a super convenient way to view the current state and attributes of any entity in your network.

And the Template tab is a great scratch-pad to copy bits of scripts and mess with the code. It evaluates each line of code immediately and displays its output on the right hand side panel.

Thanks so much for the feedback, that’s an awesome complement!

can it be that this does not work with Amazon Echos?
For me nothing happens when I apply the script to my Alexas.

Hi @Loki81 . Apologies, I started replying the other week but closed the tab and forgot about it.

I suppose it depends on how it’s been integrated within Home Assistant. Did you end up solving the problem? If you had another media player device of a different model or manufacturer we could work out if there’s a potential quirk specific to the Echo.

I have now tested the script with my Philips TV. There it works in general. Only the runtime is not correct. I have set 30 seconds and the script has run about 80 seconds.

On my Echo’s it does not work at all.
The volume does not change. With the MediaPlayer Card I can adjust the volume without any problems. 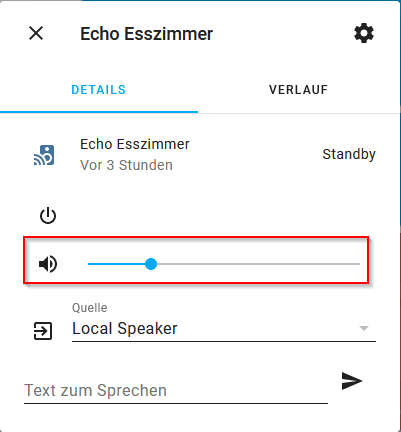 @MaxVRAM Thank you ever so much for sharing this! I have also been wanting a smoother fade of music for different scenes. Awesome work - and as a complete bonus I learned new things around how to do scripts!

That’s really interesting @Loki81. I need to revisit this code and have a look into why the Echo isn’t responding to the automation. If anyone else has Echo devices and has the time to test this script out on their media players it would be most helpful, since I don’t have any Echos.

As for the run-time variance, the variation between your configured time and actual use-case time is huge, far bigger than the difference in my own experience. A quick question, what hardware are you running your HA instance on? I’m curious if CPU power has any impact on this drift.

I just want to thank you for providing feedback and responding to my questions, it’s super helpful when developing tools that run on a large variety of hardware platforms.

That’s awesome. Glad to hear it @herbert … Feel free to explain how you’re using it, because it’s always really exciting to hear the range of ways people use my projects.

Is there a reason why duration is limited to 60 seconds? I’d like to set it to 5 minutes.

Hi @MaxVRAM
my HA runs on a Protectli Vault Hardware. CPU Usage is at 5%, so i don’t think that this is the problem.
For runtime I also tried a few seconds, so this shouldn’t be the problem, too.

I have no idea actually! I’ve just updated the script to allow any value in the transition input box. Thanks for the suggestion

hi @MaxVRAM,
thanks for this awesome idea.
I tried it with two different media players (Philips TV and Sonos Speaker), but the volume immediately went up/down as I started my automation. Like if there was no duration, but I tried it with 60s and even more.

Any idea or someone, who has the same problems?
thanks in advance

I recently changed one of the lines to use abs to abs(0), in an attempt to resolve an issue with null target volume values producing an error. But it turns out abs(0) doesn’t work the same way float(0) works, so I’ve reverted. I’ll find another solution and update it accordingly.

Thanks for the report. If you update your script using the recent code it should work as expected. If not, please let me know.

Now it works, but I have the same problem with my Sonos as Loki81 before.
The duration is much longer than set.
I have set it to 5 seconds, but it took almost 60 seconds from 0.00 to 0.06 volume level. And then this error occurred:

So I think it’s not a problem with HA or the script. It seems the media player itself is the bottleneck.
I have testet it with my Philips TV. It took 12 seconds instead of 5 seconds.

Of course!
We like our music a bit louder while we cook. When we then sit down to the table and activate Dinner mode all the lights in the house dim down to a nice level and now the music also has a nice fade down in volume. This is way nicer than the abrupt change of volume we used to have.