“If I would have one wish free, that would be… Allow correcting database entries using the UI”

The current option of fixing single statistic entities values is nice, but not enough at all. 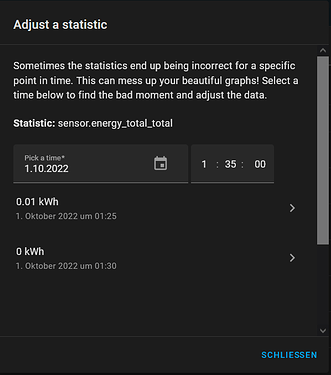 Your total energy usage sensor had a hiccup and substracted/added some megawatts a few days ago and now your energy dashboard is totally broken?
Well, have fun with one of the guides listed below. Grab some coffee and say goodbye to your friends and family for the next few hours (better to reserve half of the day).

I meanwhile spent at least something like 15 to 20 hours in total of firing SQL select and update statements at the database to fix stuff in states, statistics and statistics_short_term tables - for good reasons (because the alternative would always have been to live with completely wrong data like forever). But switching to the dark side (doing operations “on the open heart”, the database) is quite very risky.

A safe (because pre-defined / guided) way of editing single data points and doing mass changes as well would be so great. No need for speaking SQL, no need for spending hours, no need for living with false data because it’s too complicated to fix.

The UI is really lacking support for this. Maybe just put it in the dev-tools section so normal users not knowing what they do don’t accidentally play around with it?

Can you please please please search before creating these? This is the second or third of yours in the past 2 hours that are duplicates.

Sorry for that. Reason why:

When you create a new topic in this WTH section, the topics shown on the right are taken from the whole community, it’s not filtered to this WTH section. That makes it quite difficult to efficiently detect similar or identical topics.

Click on the wth section before you create your topic and it will filter to all wth. You’re viewing from the community overview page, not the wth section.

That’s what I always did sir.

That’s applied everywhere in all topics. That’s not how you search or find similar topics

Alright. I put my bets on the automatic topic search function when creating a new topic, which COULD do the same (if its search results would be limited to the section I already have selected before - not very intuitive…). No advanced additional search. But I’m done with everything that came to my mind anyway

Just link the first WTH entry for this topic here and lock this one (so all votes are united over there).

On mobile so it’s gonna be a bit

Fix Individual Entity Data Points Month of "What the heck?!"

I would like to be able to easily remove or edit a bad data point from a sensor. Here is an example of a humidity sensor that has a random reading that throws off the history graphs which I like to use. [image] It seems like the only real way to do this now is to edit the recorder database directly. There was an update in 2022.4 that allows for correcting aggregate statistics using Developer Tools | Statistics, but I don’t think that helps in this particular situation. For one, this sensor is…