Even though there is no proper integration for it yet, I went out and bought a Wyze Cam v2. This will be both a general review of the product, and from a Home Assistant perspective. So when you get the camera, setup is simple in the app. You sign in with a Wyze account or create one, then you click “add a device”, choose Wyze Cam v2, then you setup Wi-Fi credentials. Now a QR code appears on the screen, so you plug in the Wyze cam, and press the setup button on the bottom inside the stand thing. Now you just point the camera at the QR code, and it works. shot%20on%20wyze1125×633 63 KB
It also can record motion and sound events and save them to cloud, but you can disable it. You can also record to a Micro SD card. I believe someone made firmware that makes it just an rtsp camera and makes it impossible for them to spy on you, but i dont care and wont get into that. (Edit, it is called OpenIPC, I will try it out soon

Now for the home assistant part.
So to get the RTSP for the camera, first you have to actually flash a different firmware, with RTSP support from Wyze’s website. Took about 5 minutes, wasnt too hard. All i needed was to put the files on a Micro SD card and put it in the camera.

Then in the app you turn on RTSP.
You then create a username and password, and it gives you the url. Easy as that.
Here is my config.

It works. What else can I say? The quality is decent for the price. Good low light, too.
I don’t use anything advanced like motion eye or whatever yet.
That’s pretty much it. My only complaint is it only being rated for indoor use, but others have put silicon and made it water ressistant, and you can also get cases for outdoor on Amazon for pretty cheap.

I asked Wyze if they are working on a water and dust ressistant version, they told me yes.

If you need a cheap 1080p camera with loud enough 2 way audio, ability to see RTSP in HA, maybe consider this. I’m not really sure how it holds up to competition like Xiaomi though, but Wyze will likely send firmware updates for a while.
https://amzn.to/31MvA8R
I am not in any way affiliated with Wyze.

1 YEAR UPDATE:
Ok so its been 1 year, so I decided to give some updates.
Reliability: its been pretty good so far
Camera Quality: It’s ok, dynamic range isn’t great but that’s not so bad since it is an indoor camera anyway, but bright windows in a dim room isn’t a good combination. Its only 15fps and the shutter speed probably isn’t that high. It works fine outdoor as long as it is protected from rain. RTSP Wyze firmware now has Person Detection. Wyze Cam Outdoor is now available, I have one but it is battery powered so RTSP probably isn’t a good idea. But i wonder if i can break into it…

Update 2: Wyze has also now announced the Wyze Cam V3, which is an upgraded version that had a better sensor as well as water resistance. I have pre-ordered some and when they add RTSP, I’ll make sure to post about it here.

When using the RTSP firmware, does night vision automatically activate in dark areas and turn off in bright areas? Is motion detection processed locally on the camera or are you expected to process on a MotionEye server? These were the biggest pet peeves I had with an equivalent Xiaomi camera–I couldn’t turn on the infrared lighting so the camera was useless at night.

I don’t really care about live camera feeds on Home Assistant since I’m not monitoring my dashboard all day, but I would like to know if the Wyze Cam can send motion detection notifications while using RTSP firmware. I’m guessing with RTSP firmware, all image processing needs to be done outside the camera.

In the app you can turn on/off night mode, but by default it is on auto and it activates by itself.
Edit: I don’t know About the 2nd part, but Wyze is adding official HA support soon so maybe one day. (See my other post)
Also since there recently was a major firmware update for person detection improvements, they updated the RTSP firmware to the latest version so it has the same features as the default one but with RTSP. Contribute to EliasKotlyar/Xiaomi-Dafang-Hacks development by creating an account on GitHub.

That’s great to hear. So you can use the RTSP firmware but still get motion detection alerts through the Wyze app? That’s good enough for me.

Yes with RTSP firmware it will still send you motion and sound alerts.

There is motion detection but additional features are not going to be added to the RTSP firmware (like people detection) and there is no direct integration to pull motion alerts/triggers without using another program with the RTSP stream (I’m using MotionEye with MQTT to create motion sensors for my cameras).

no its just that it isnt updated as often. But since there was recently a major update to person detection, they added it to rtsp firmware.

But since there was recently a major update to person detection, they added it to rtsp firmware.

If that’s true they haven’t done it yet, my wyze cams with RTSP don’t have person detection and they are using the official RTSP firmware which is the latest on their website

They have person detection with rtsp firmware now? i just checked and didnt see any can you share a link if so please?


I was wrong, it does not have person detection. Only motion and sound detection which are still ok. You could probably use some third party software
paranee2 (Paranee2) October 11, 2019, 2:36am #14

hi quick question. i am trying to update , its not letting , keep saying ready connect…
basically this is what i am doing
i download [Wyze Cam v2 RTSP file “https://support.wyzecam.com/hc/en-us/articles/360026245231-Wyze-Cam-RTSP”. unzip and rename the file from “demo_V2_RTSP_4.28.4.41” to demo.bin and place in the sdcar and insert and press the setup and plug the wire… but i am not getting blue right …keep saying ready to connect

Honestly when I did it, it took a few tries. What I did was put the card in hold the button, plug it in, and hold the button to the point where my finger was hurting, until it finally worked.
Also someone made a custom firmware that I am yet to try, called OpenIPC. I will try this soon because it is interesting. It just won’t work with the Wyze app is the problem.

finally found the issue
sd format should be fat32, otherwise it wont work

thank to him
hes integrating into home assistant 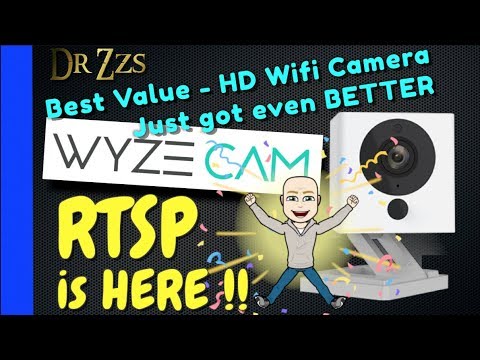 Is there any way to save video files on the wyze cam sd card through motioneye?

That’s what i did, I flashed the custom RTSP firmware and and added it as a generic ip camera. you can also use a 3rd party firmware like OpenIPC, but you lose the Wyze app functionality.

Not that i am aware of. Why would you do that though when you could use an sd card or usb drive on whatever device you have motioneye or HA on and save them there?

Could you show your code on how you added your camera?

I have 2 Wyze cams with the RTSP firmware, added them as ffmpeg, both work, but I keep getting a DTS Error in my logs.