Hmm… Are you saying that you do the following in your automation?

Then I ran across some genius from @pnbruckner for using a python script to call the services and use its datetime functions as a timer. So far, this is working. I may have to tweak the delay of 3.7 a bit, but I’m only getting one chime at the moment. Yay.

Note, YMMV and your delay may be different depending on your particular network, CPU, etc. I’ll post back if I find this doesn’t work as expected long term.

Thanks Dan and Phil!

given that millisecond delays aren’t really a thing in HA

Yes, they are, and have been for a while now. See AUTOMATIONS & SCRIPTS: SUB-SECOND PRECISION.

Apparently not on my system @118.3 (which is pretty basic), because your python solution worked when the millisecond delay, which I have known about, and tried first, didn’t… at least not consistently or reliably. Not sure why.

At any rate, accept my thanks for just another way for doing something. Cheers.

Working perfectly with zwave-js 2021.3.0 chime as well as siren.

hi do u mind share a piece of config to ring a chosen sound in an automation? thanks!

Value is the number of the tone, by default there are 33 or 36 inbuilt tones and after that are the ones which you have uploaded. 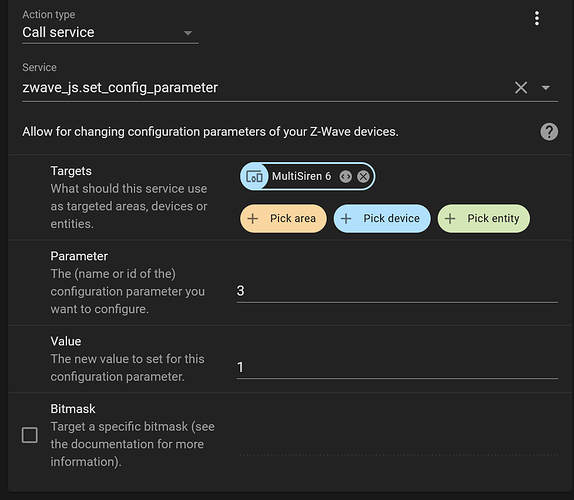 thank you! do u know if there is any way to send the desired volume value as well?

I do the volume from zwavejs2mqtt, not sure if it can be set through set config parameters as there are only three available to set as per the documentation.

With some help from this post I was able to create a very basic automation.
My issue is there is a 3-4 second latency from the time the window opens until the siren goes off

Any way to to shorten the delay?