Since I first realized my Nest Protect Smoke Detectors have built-in motion sensors, I’ve been hoping for some way to integrate them into home automation. I started with HomeBridge and migrated to Home Assistant when I became weary with what HomeKit could not do by itself. The Nest integration for HA hasn’t been updated for the transition to Google accounts and never supported the motion detectors on the Protect, where-as the homebridge-nest plugin for HomeBridge supports bridging everything Nest into HomeKit really well. For a while I was using exported input_boolean from HA to HomeKit using automations to report the motion sensor status back to HA. This, however, is a real pain-in-the-ass, especially when your Google account cookies logout or expire. It all has to be setup again and it is not a simple process.

The author of homebridge-nest has a commercial product by the name of Starling Home Hub. It has homebridge-nest inside with a Google account management layer to keep things logged in. For $89, I figured it was worth my time to get it to not have to redo my homebridge-nest configuration over and over again.

When I received it, I decided to try to integrate the Starling Hub as a HomeKit Controller integration in Home Assistant instead of using HomeKit as a go-between.

After setting up the Starling Hub, I added the HomeKit Controller integration via the web. It popped up the “Pair with HomeKit Accessory” prompt:

Pulling the menu down reveals the Starling Hub:

Select it and press Submit:

A prompt for the Pairing Code appears:

Which is then pulled from the Starling Hub page waiting for pairing:

And filled into the Home Assistant prompt:

The Protects all appear asking for areas: 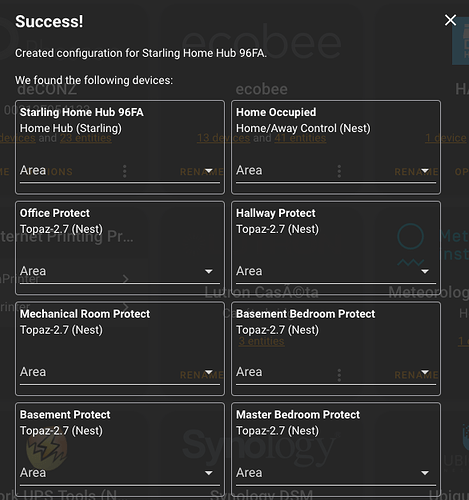 Once the areas are filled and the window closed, you can find the newly added entities under the integration for the HomeKit Controller: 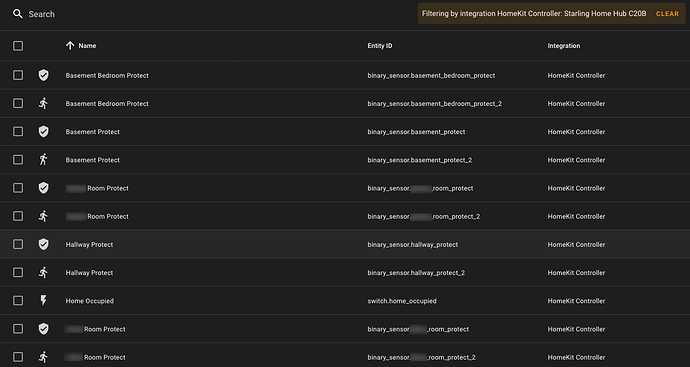 The motion sensors work albeit with a slow cloud-based turnaround. I don’t know what the shield icon entities are, because when the Starling is directly connected to HomeKit, there are three sensors, Motion, smoke, and carbon-monoxide. I’m not going to set any fires right now to figure this out, and all I wanted were the motion sensors in the first place. If Google can know there is motion in my house, I should be able to as well.

Thanks for sharing this! I needed a solid example to convince me that these could be used for room occupancy.

Thank you for posting this information. I just ordered a Starling Hub, and I was curious if I could use it to add devices to Home Assistant that don’t have native Home Assistant support yet. Specifically, I have several Nest cams and a Nest Yale door lock that I want to see if I can integrate into HA. Official Nest integration doesn’t support those items yet (with the newer Google SDM API).

No clue on any other Nest devices aside from the Protect, because that is all I have. Be sure to add to this topic when you get your Starling Hub installed and let us know.

Got my Starling today, and using the set-up steps mentioned here, I confirm that the Nest Yale lock works in Home Assistant. Works great, actually.

So, for those interested in getting the Nest Yale lock working in HA, this is one way to do it.

It doesn’t appear to be showing motion for me. It shows Entity &Entity_2 as smoke and gas. How were you able to pick up the motion sensors?

You added it as a HomeKit controller, right? Since I wrote the original post, they have changed to occupancy sensors (house icon) rather than motion sensors, probably because they’re not as fast as motion sensors (but still fast enough). Do you see those?

nope Sensor_2 shows as gas for me. I wonder if they made changes to the newers protects?

Ask the Starling people. They’re pretty responsive. Let us know what they say.

some clarity, motion sensors aren’t provided with the battery version of protect.

With cameras, depending on how many zones you have set, there are a LOT of boolean sensors, all of which are just numbered. I am digging into the Starling API docs to see if there is a way to see how these are identified.

It shows Entity &Entity_2 as smoke and gas

My first one, which I have just added is shown as 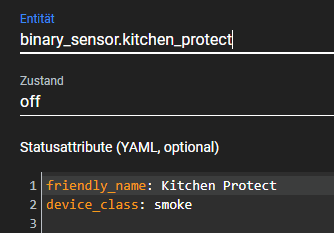 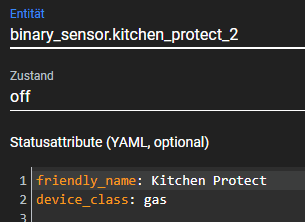 Why do you have other icons than I have, @pashdown. Overwritten set by you?

Good one on finding smoke & gas. I presume gas is carbon-monoxide?

The icons have changed in Home Assistant versions for whatever reasons. I’m not sure if it is HA or Starling’s definitions, but my icons are the same as yours now.

Good one on finding smoke & gas. I presume gas is carbon-monoxide?

Thanks for the answer about the icons. Will change them localy.

Did you get sensor state changes if you do the tests with button press on the protects? Here no change in the log.

So I have to test with real smoke, if something is sent to HA. And I wonder if the pre-alarm is sent as well with another state or only the real alarm after the pre-alarm/info/warning.

No change with button test. Let me know how your smoke test works out.

Tried a lot of things today. So I think now, that the pre-alarm (without beep) is never sent to Starling/HA. But every final alarm with beep has been sent to HA successfully. 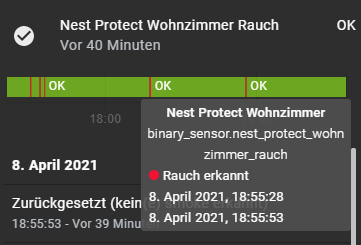 Further information: The device was automatically setup with a name, which I don’t like. So I changed friendly name, but entity names as well. Everything is working nevertheless, so it seems to be connected via a guid.

Last thing: New added devices are only shown up in Starling Hub if I re-start the Starling hub. Reload of the starling setup page is not enough, whyever, because there it reconnects to google/nest as well. As soon as the starling hub is restarted, the next devices are there and then automatically synchronously in HA, with the need of restarting HA or Homekit adapter.

Next Info: Deleted devices in Google/Nest account. Afterwards they are gone in Starling Hub as well, but remain in HA. Whyever. And I’m not able to delete them.

Opened another thread for such kind of issue. Don’t think that this is starling hub releated.

I have added several Nest Protect devices via Starling Hub (a kind of homebridge box) and HomeKit Controller to HA. It is working great, see here. But If I delete one device in Google/Nest account, it is directly automatically deleted in Starling Hub as well, but it remains in HA. Why? And more important, how to delete such orphaned devices and entities in HA? Restarted Hub, restarted HA, restarted Adapter, refreshed pages, … Delete button is not available, only for the whole Integration of th…