Re-evaluate CCT with WLED and the HA WLED integration

Since 2022.2 HA’s WLED implementation has explicitly prevented any WLED devices reporting CCR capabilities from being used in HA.

I’ll be 100% honest and admit I don’t begin to understand everything that’s going on here. But I do know that myself and a ton of other Athom bulb owners (others as well) are being forced to cripple the functionality of their bulbs in order for them to be used in HA. All of the workarounds in WLED to allow HA integration prevent me from using the white channel in my bulbs.

I totally understand that there was an issue where some bulbs that had a white channel only were being displayed a color wheel, so it makes sense that the decision was made back in January to prevent them from being used in HA. However, it looks like most of the discussion between HA and WLED teams took place in Feb and March. On April 16th, Aircoookie/WLED#2500 (comment) shows that 0.13.0-b7 launched new functionality that may (or may not) give a pathway back to smooth integration between the two projects with regards to devices with CCT channels.

This feature request is to have the new WLED API functionality incorporated into the HA WLED integration and allow CCT LED’s to operate with HA again.

<!-- You are amazing! Thanks for contributing to our project! Please, DO N…OT DELETE ANY TEXT from this template! (unless instructed). --> ## Proposed change <!-- Describe the big picture of your changes here to communicate to the maintainers why we should accept this pull request. If it fixes a bug or resolves a feature request, be sure to link to that issue in the additional information section. --> Add support for segment-based light capabilities to the WLED integration. Needs: Lots of testing with IRL devices ## Type of change <!-- What type of change does your PR introduce to Home Assistant? NOTE: Please, check only 1! box! If your PR requires multiple boxes to be checked, you'll most likely need to split it into multiple PRs. This makes things easier and faster to code review. --> - [ ] Dependency upgrade - [ ] Bugfix (non-breaking change which fixes an issue) - [ ] New integration (thank you!) - [x] New feature (which adds functionality to an existing integration) - [ ] Deprecation (breaking change to happen in the future) - [ ] Breaking change (fix/feature causing existing functionality to break) - [ ] Code quality improvements to existing code or addition of tests ## Additional information <!-- Details are important, and help maintainers processing your PR. Please be sure to fill out additional details, if applicable. --> - This PR fixes or closes issue: fixes # - This PR is related to issue: - Link to documentation pull request: ## Checklist <!-- Put an `x` in the boxes that apply. You can also fill these out after creating the PR. If you're unsure about any of them, don't hesitate to ask. We're here to help! This is simply a reminder of what we are going to look for before merging your code. --> - [ ] The code change is tested and works locally. - [ ] Local tests pass. **Your PR cannot be merged unless tests pass** - [ ] There is no commented out code in this PR. - [ ] I have followed the [development checklist][dev-checklist] - [ ] The code has been formatted using Black (`black --fast homeassistant tests`) - [ ] Tests have been added to verify that the new code works. If user exposed functionality or configuration variables are added/changed: - [ ] Documentation added/updated for [www.home-assistant.io][docs-repository] If the code communicates with devices, web services, or third-party tools: - [ ] The [manifest file][manifest-docs] has all fields filled out correctly. Updated and included derived files by running: `python3 -m script.hassfest`. - [ ] New or updated dependencies have been added to `requirements_all.txt`. Updated by running `python3 -m script.gen_requirements_all`. - [ ] For the updated dependencies - a link to the changelog, or at minimum a diff between library versions is added to the PR description. - [ ] Untested files have been added to `.coveragerc`. The integration reached or maintains the following [Integration Quality Scale][quality-scale]: <!-- The Integration Quality Scale scores an integration on the code quality and user experience. Each level of the quality scale consists of a list of requirements. We highly recommend getting your integration scored! --> - [ ] No score or internal - [ ] 🥈 Silver - [ ] 🥇 Gold - [ ] 🏆 Platinum <!-- This project is very active and we have a high turnover of pull requests. Unfortunately, the number of incoming pull requests is higher than what our reviewers can review and merge so there is a long backlog of pull requests waiting for review. You can help here! By reviewing another pull request, you will help raise the code quality of that pull request and the final review will be faster. This way the general pace of pull request reviews will go up and your wait time will go down. When picking a pull request to review, try to choose one that hasn't yet been reviewed. Thanks for helping out! --> To help with the load of incoming pull requests: - [ ] I have reviewed two other [open pull requests][prs] in this repository. [prs]: https://github.com/home-assistant/core/pulls?q=is%3Aopen+is%3Apr+-author%3A%40me+-draft%3Atrue+-label%3Awaiting-for-upstream+sort%3Acreated-desc+review%3Anone+-status%3Afailure <!-- Thank you for contributing <3 Below, some useful links you could explore: --> [dev-checklist]: https://developers.home-assistant.io/docs/en/development_checklist.html [manifest-docs]: https://developers.home-assistant.io/docs/en/creating_integration_manifest.html [quality-scale]: https://developers.home-assistant.io/docs/en/next/integration_quality_scale_index.html [docs-repository]: https://github.com/home-assistant/home-assistant.io

Hi mate, what was the temporary solution to get the Athom bulbs working in HA? I just bought 3 without realising this issue existed

Anyone struggling with a workaround since the WLED UI: I was able to add a new WLED instance by changing the following setting. 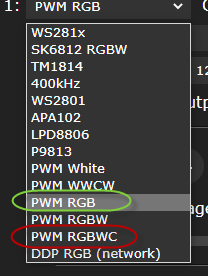 Hey! Any news on this? Last night my WLED worked just fine. I woke up this morning to the same error message.