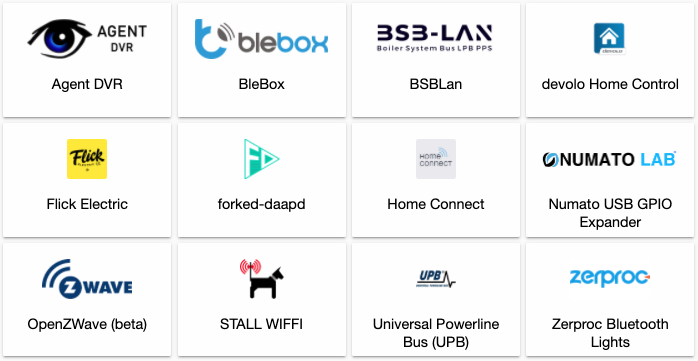 Do you know how excited I am for bringing you Home Assistant Core 0.110?

Would you believe me, if I told you I’ve been upgrading my personal Home Assistant production instance to the latest development version almost every day?

Well, better believe it, it is how I started my day for the last 3 weeks. It felt like opening new presents and enjoying amazing improvements every day.

Today, we are shipping it all to you, as one big package. 🎁

This is definitely one of the bigger releases of Home Assistant on all levels. Speed improvements to both the frontend and backend, lots of usability improvements, 12! new awesome integrations and an insane amount of major updates to existing ones.

In Home Assistant Core 0.109, we made the frontend lighter and faster, this release takes it a step further.

The way icons are loaded is updated. With the ever-growing Material Icons set, it was necessary to update the way we handle icons to make sure our application continues performing.

The Material Icons are now split in chunks, so the frontend does not have to load all the icons if you just need one; besides that, we no longer store the icons in the DOM but in a database.

This saves a lot of memory and thus makes the Home Assistant frontend even more leaner and faster!

Honestly, it is not just icons… A lot is optimized to make the frontend faster this release. It is now snappier than ever!

@timmo001 added the possibility to search your integrations, so you can find what you are looking for quickly.

We also grouped the entries by integration now, this means we no longer show multiple cards for the same integration, but show a list of the names if there are multiple entries.

If you click the entry, it will show that entry in the card. This makes it easier to keep an overview of all your integrations. 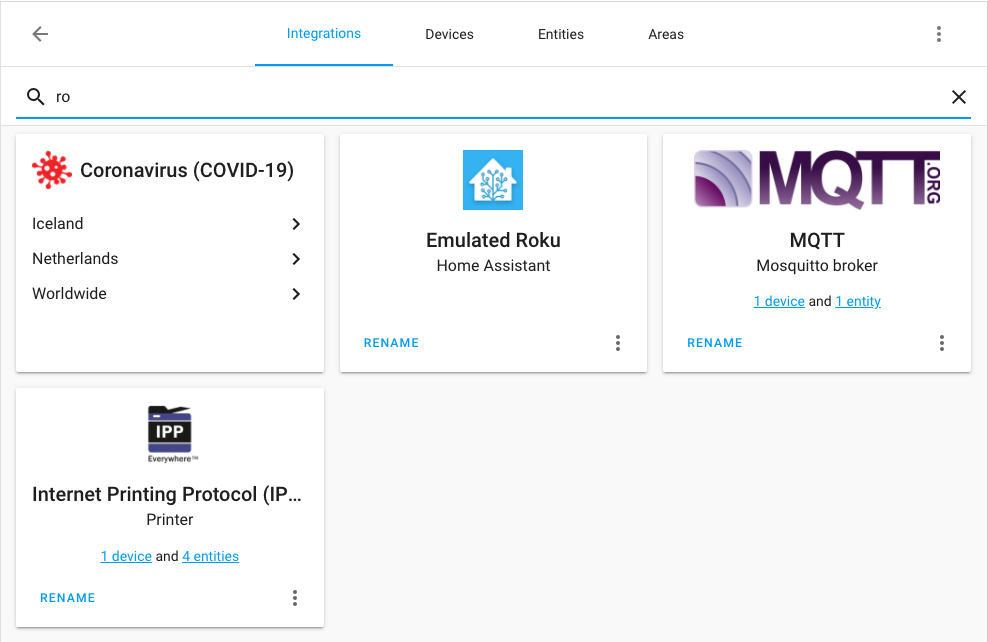 Oh! We’ve also made the icons and logos available for custom integrations!

Screenshot of the HACS integration with its icon shown.

This release features the new OpenZwave integration. It has been in testing as a custom integration by the community since last December and is now ready for a wider audience.

It is still early days for this integration, though; not all platforms and devices are supported yet and the setup process has prerequisites that raise the accessibility bar. See our documentation for the current requirements and instructions.

If you want to give it a shot, you should be comfortable with setting up custom add-ons and MQTT. There is no migration from the current Z-Wave integration yet, this is still to come.

The plan is to add more platforms in the future, making it super simple to set up the integration. Stay tuned.

Thanks go out to the community that has been testing the custom integration and provided very valuable data to allow us to catch bugs and support more devices. A special thanks to @cgarwood and @marcelveldt who have been pioneering building the integration.

Every discovered integration can be ignored

An often reported issue/request feature is to allow any discovered item to be ignored. Most integrations supported that already, but some didn’t.

Result: Any discovered item, can be ignored.

Thanks to @zsarnett we got a beautiful new calendar panel!

It shows you all items of the calendars you select in a month, week or day view. There is also a calendar card for Lovelace in the making.

calendar_panel.png1905×936
Screenshot of the Calendar panel.

We got a lot of feedback about the updated weather card of the last release, we listened to feedback and added some features. You can now theme the colors of the new icons, and you can even completely replace them with another image.

You can also set the attribute you want to show as the secondary information.

Screenshot of the updated weather card.

Check the documentation for more information.

There are many cases where an integration needs the URL/link to your Home Assistant instance. For example, to set up a webhook, communicate audio files or camera streams to an Amazon Alexa or Google Assistant device.

We used to have a base_url setting to deal with those cases, but that wasn’t always sufficient. Some integrations require specific requirements for that setting, which could lead to conflicting or impossible settings.

It often resulted in broken TTS, streaming issues for camera’s or issues with casting. This release addresses this issue by introducing two new settings in Configuration -> General. 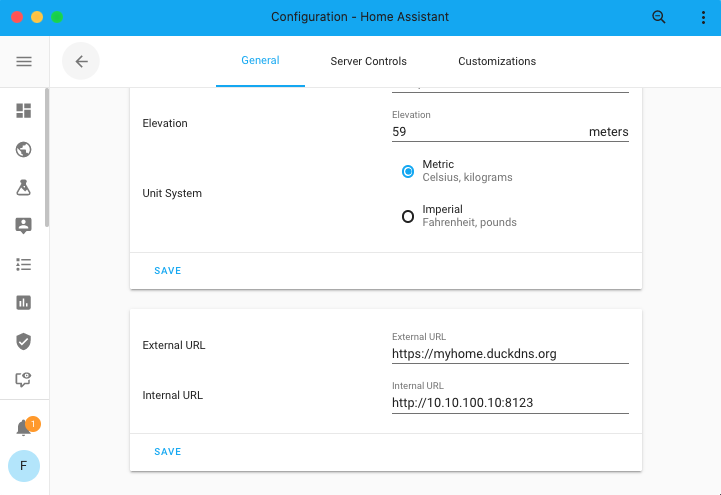 urls.png721×495
Screenshot of the URLs configuration.

If you want to set those via YAML, homeassistant: main configuration has now a external_url and internal_url setting.

These settings allow you to override the URLs Home Assistant uses when communicating on your internal network versus the outside world. Please note, that these are overrides. By default, Home Assistant will try to figure this out on its own.

If you have a Home Assistant Cloud subscription, integrations can now also leverage that. This will reduce the amount of, often complex, configuration needed.

After upgrading to 0.110, you can delete base_url from your configuration as Home Assistant will automatically migrate that setting for you on upgrade.

Support for “not” conditions in automations

When an automation triggers, one can use conditions to check if the set actions of an automation should be run. Conditions, however, always take the positive approach: If “something” equals or is “this”.

As of this release, the conditions now have support for specifying if a condition (or set of conditions) should “not” match. This can be helpful for devices or entities that have multiple states, but you actually only want to ensure it is not just that one state.

not_condition.png855×375
Screenshot of the automation editor with a "not" condition.

This feature has been added to the automation editor, but is also available for writing automations in YAML:

@bdraco has been busy improving HomeKit support for Home Assistant in 0.109, but it seems like that didn’t stop him even a tiny bit. This release @xdissent and @stickpin jumped on the HomeKit bandwagon as well!

HomeKit can now be configured and set up from the Home Assistant frontend, and even allows you to set up multiple instances! This allows one to bypass the maximum amount of devices a single HomeKit gateway supports by adding multiple. Using multiple, will also allow you to bypass the 1 TV per bridge limit on HomeKit.

Ready for this? Home Assistant Core 0.110 now has camera support for HomeKit!

And if that wasn’t enough already, the HomeKit integration now sends out more information as HomeKit accessory information. So besides the entity id, which was already present, you can also see which integration (and its name) provided the accessory in HomeKit. 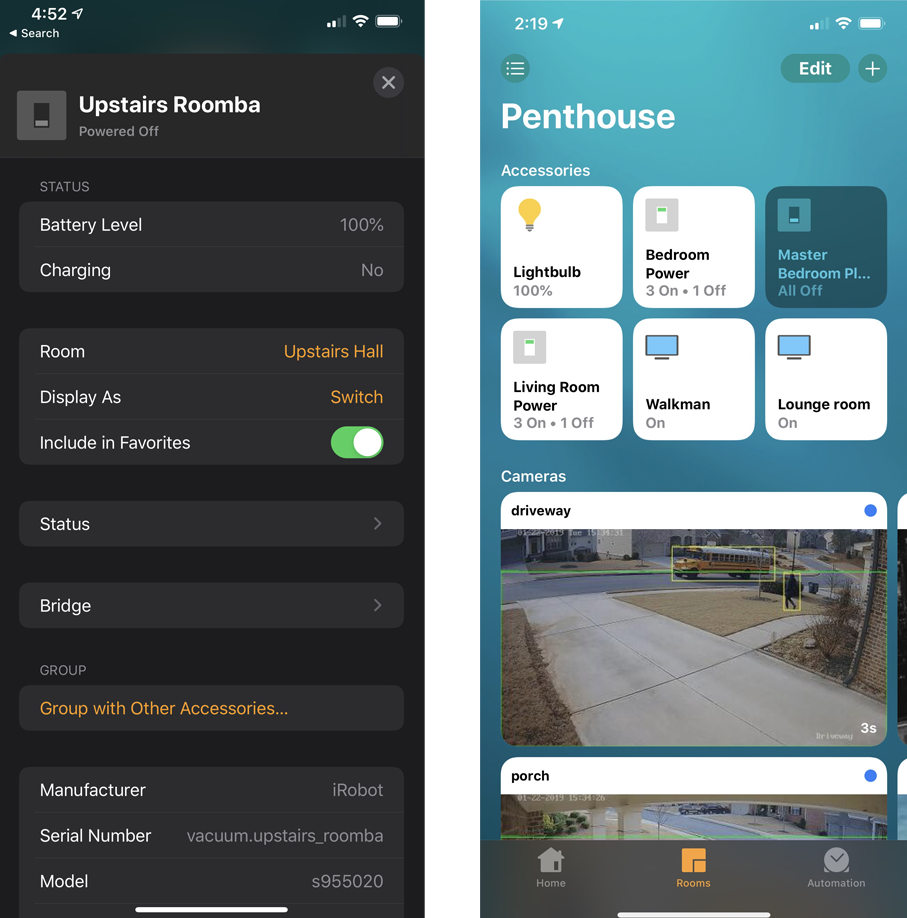 The ONVIF integration did get lots of love from @hunterjm! ONVIF Profile S conformant camera’s, can now be set up via the UI!

And that is not all… It now leverages more features of the ONVIF protocol: pull point subscriptions. This means that events from ONVIF will now show up in Home Assistant as well. So, if your ONVIF compatible camera supports things like motion, object or sound detection, those will be available now! 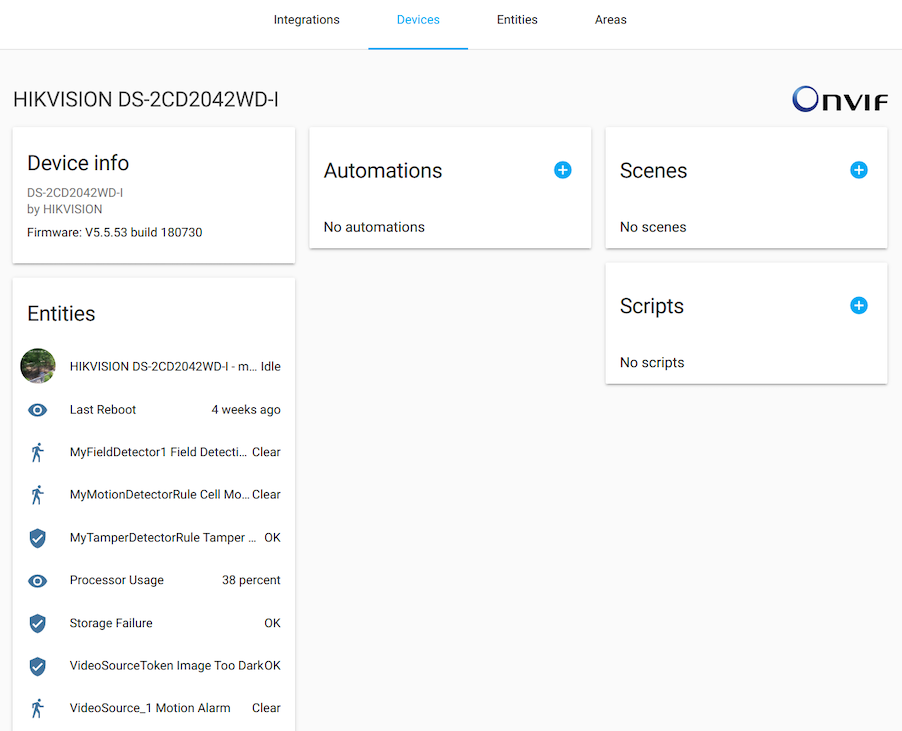 onvif.png902×731
Screenshot of an ONVIF camera in Home Assistant.

Have you seen the new supervisor UI? @ludeeus did a great job redoing it’s UI! It now uses the same tabs as the configuration panel. The add-on page is split into multiple tabs, the add-on store is cleaned up and you can view all logs in the system tab now (requires advanced mode). 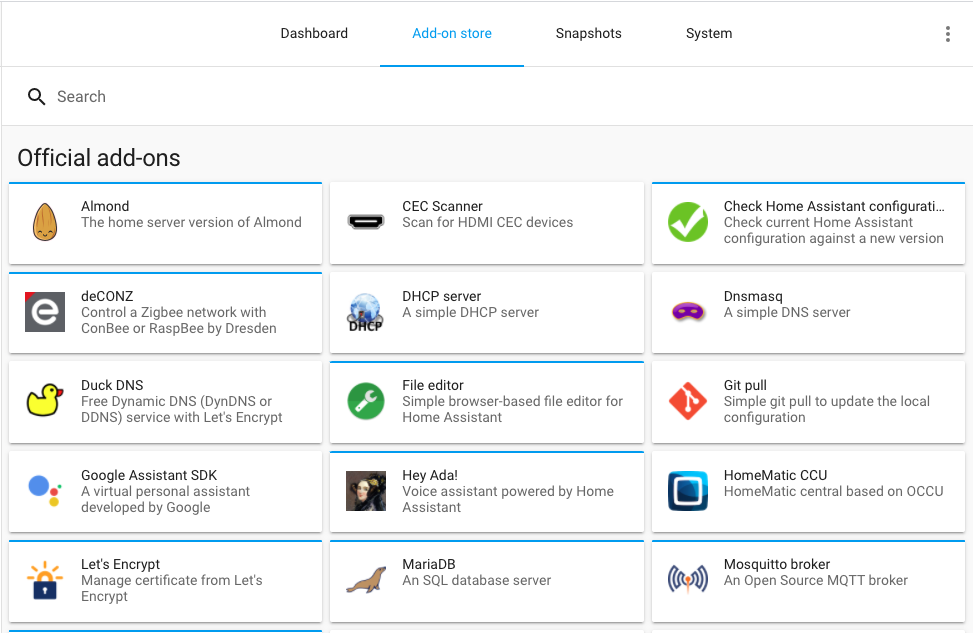 supervisor_panel.png973×633
Screenshot of the Supervisor panel.

Some add-ons are now also marked “advanced” and are only visible when you’ve enabled advanced mode on your user profile.

Integrations now available to set up from the UI

The following integrations are now available via the Home Assistant UI:

If you need help…

…don’t hesitate to use our very active forums or join us for a little chat.

Experiencing issues introduced by this release? Please report them in our issue tracker. Make sure to fill in all fields of the issue template.

Can’t wait to try out the new Squeezebox sync options. Kudos for this release guys!

Did the upgrade, but now i do see some ugly HACS background on all the views in Lovelace. It shows up on the bottom, so after all the cards are displayed it shows in big black HACS

Got it fixed by reinstalling

Been waiting for the NOT conditions, makes so much sense

Cool for the new release
Is there any change in upgrade procedure since 109.6?

I installed a supervised Docker version on Synology
Today I don’t see the “upgrade” button anymore on release, within the supervisor

already up-to-date and restarted several times. Also all the icons in custom button card have changed size but havent checked on that, could be i’m running an older version of the card.

HACS is telling 0.24.5 as version and also the latest in the repository

Today I don’t see the “upgrade” button anymore on release, within the supervisor

I can take up to 2 hours after the announcement before it is available.

Thanks, I wait eagerly for the new release!

Thanks for the update. I have 1 issue though. I have a horizontal stack with 4 gauges in it. The gauges now behave strange. The size of the semicircle changes sometimes. They also have different sizes on the mobile phone (see screenshot).

Thanks, I wait eagerly for the new release!

It is now available for upgrade on all platforms.

Couldn’t wait until especially the HomeKit camera feature was released, nice! Looks like the upgrade broke my HomeKit integration though, so I’ll have to re-setup that part on my HomeKit app…

Thanks to all involved!! I love the fact there is now the ability to find out what version of Home Assistant we are running

. I’m one of the users who needs this

has the latest docker image been released? I tried upgrading twice now but don’t get the 0.110 update yet.

Yes they are, check the docker hub. You have the latest push image https://hub.docker.com/r/homeassistant/home-assistant/tags

Yes it is available now: 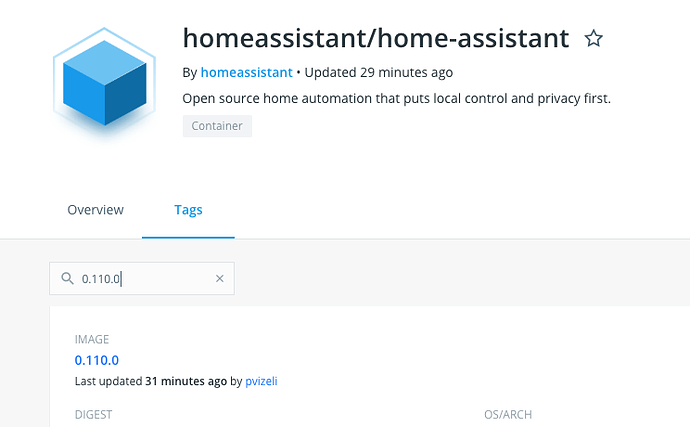 Maybe there’s something with my eyes, but where to enable & add Calendar panel?

Cheers guys thank you for all your hard work