How did you install Home Assistant?

In light of the current controversy over the Supervised install being removed I’d like to open a poll to find out how users in the forum have installed their “Home Assistant” system. I think it will provide some insight to help the developers to make an informed decision on future support options.

I’m narrowing these options to just the installation method used. It has no tight or direct correlation to what the “official” names of the resulting system is that you are running.

Here is a handy flow chart to help guide your selection: 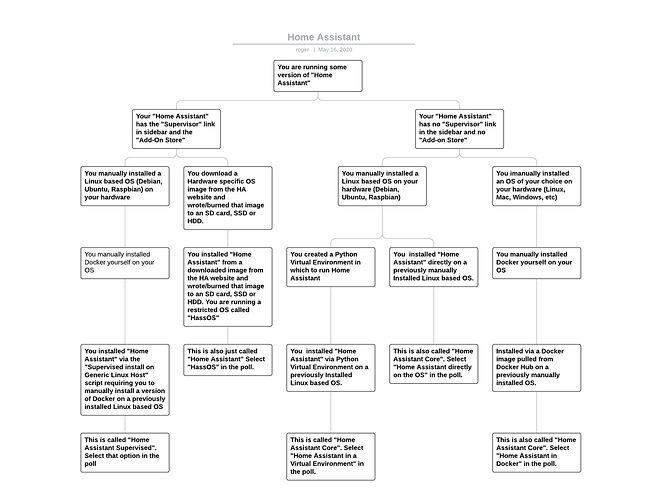 If you run more than one instance please select the one you consider your “production” instance.

EDIT: Sorry I had a copy/paste error in the flow chart. Fixed.

I have 2 instances, with different install methods. So I just voted the one I did first. Unless you can change the poll to allow multiple selection?

Unless you can change the poll to allow multiple selection?

I thought about that but I think that might muddy the waters even more than they already are.

And most people only run one instance anyway.

I should make a note to just pick your production instance if you have more than one.

Today is the first that I heard there are different cores for HA. Why? What’s the difference?

Nothing except the way it was installed and how it’s managed/updated.

Why not? What’s the benefit of using unofficial names?

I’ll re-post it for everyone’s convenience:

The last one is currently in a state of limbo (deprecated but on hold).

This is also just called
“Home Assistant”. Select
“HassOS” in the poll.

This is also just called
“Blue”. Select
“Yellow” in the poll.

Again, I’m trying to get a feel for how the different installation methods and way of running HA stack up.

The first two selections are encompassed in the HassOS selection. It says that they run HassOS right in the description of them that you posted.

I really don’t see any difference between running different those types of install - in the end you installed HA from an image that has a pre-configured minimum OS.

I split out the two different versions of “core” that I had in the other thread. And I even split out running “core” directly on the OS even tho I think the number will be tiny if any so it was mostly superfluous.

But if you object you can always vote for a write in candidate down in the thread.

Dude, I’m really sorry you have such a stick up your butt on this.

I really don’t care what the “official” name is for that type of installation. It makes no sense.

There is no way to have a coherent conversation about the topic using the names as chosen.

I even conceded and put the name in the flow chart to try to alleviate your prior concerns.

Thanks for making the poll, @finity. I hope it gets stickied so everyone can see it.

I think what Taras is suggesting is that maybe if we want the Devs to take the poll seriously, we should use the terminology they have created as the reference.

If we do that, then the results are as accurate as possible and will hopefully give them pause on removing a widely used installation method, and show what install methods are the most used.

If the devs won’t take the poll seriously because I don’t say “Home Assistant” instead of “HassOS” then there are more troubling issues than just this poll.

I don’t really think any dev doesn’t know what the poll is representing.

You know thinking about it if we wanted the poll to strictly replicate the naming conventions in use and all of the potential ways to install HA then I guess the poll should have had (at least) 6 different options and they should have been:

It all comes back to the poor naming choices made, and the suggestion that after some initial pain, everyone would come to understand.

I made the comment in that thread, “Move forward 1 month when the name changes have kicked in - the exact same situation appears to me will happen. The naming scheme looks, from what has been posted, to be just as confusing. I respectfully disagree, I don’t think it clears things up at all.”

and the reply was “I respect that. Simply put, we cannot make everybody happy. Nevertheless, time will tell.”

This, and comments like “everything is named carefully to get a full picture in the end”, have so far proven to be inaccurate 4 months later. If people don’t get it 4 months after the change, and still use old terminology (hass.io) daily in new posts, then what hope do we have.

Do we have an indicative number of users/installations no matter how HA it is installed?

One more point I think, is to take notice that the raspberry option (in my opinion) it is mainly for testing reasons for someone to see how HA works and if someone can handle it. If someone decides that it is ok it is almost certain that he needs to move on in an another hardware option which is more reliable, faster, stable, and can support many devices. I know that there are some users which operate raspberry with no problems but I believe that there are no more than 10%-20% of raspberry users.

Do we have an indicative number of users/installations no matter how HA it is installed?

They likely have metrics on how often some form of HA is downloaded but no real way to know how many actual users there are.

Those who followed a set-up script such as that by kanga_who might have a problem.

I have the Supervisor link and the Add-On store but if I followed the script some time ago I might not remember (or even know if I didn’t fully understand the commands) what I did in the next box.

But I (for example) am pretty sure I didn’t install Docker manually so I would presume I went down the right hand branch which leads me to believe I have Home Assistant / HassOS.

However, now I would be more confused because there are several references in the set-up script to ‘Home Assistant - Supervised’ which points me to actually being on the left branch.

[And as an aside, in case anyone wants to say so, no one should be criticised for not knowing what install they used. It’s not important to the user - at least it shouldn’t be.]

This (subject, not this thread) is such a mess it is becoming farcical.

Someone somewhere has to sort this out once and for all and not some small committee of people who understand everything and can’t put themselves in the shoes of those who don’t. It is statistically likely that most users are at best from a Windows background and at worst not very technical at all. It is still true that most people don’t know much about Linux and they will have even less knowledge about Python, Docker, VMs, or venv.

Seriously, the fact that we even need this poll says more than the poll results will ever do.

and the reply was “I respect that. Simply put, we cannot make everybody happy. Nevertheless, time will tell .”

Yeah, I’m quoting a quote because I don’t have the same energy as kanga_who to find the original but I have to ask, if not everybody, then who has been made happy? Time is indeed telling…

Don’t get me wrong, I am right behind this discussion on the basis that something good will come out of it - I believe even mega-corps have in the past U-turned on major branding decisions. 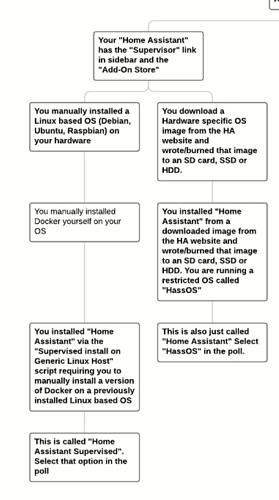 If you followed the steps to run the “home assistant on a generic linux server” script then installing docker was one of the steps.

So, yes, if you followed that procedure then you installed Docker manually on your system.

Specifically, this command here from step 6 of Kanga’s guide is what installed docker on your system:

Yes, I’m just trying to highlight the mess.
If one didn’t keep a copy of the script or just couldn’t be bothered to look it up you’re not going to know.

Thanks @finity for creating this poll. Can I suggest this should remain open for quite some time so a substantial number of users get the chance to add their vote?

You have to wonder why the devs would not gather this type of information routinely to keep up with what keeps their bread buttered at least?