I have simply taken the pi 4 image provided and set it going. All works fine.
However I saw mention that this version was not as complete as the pi 3 variety.
Is this still the case ? and if so where can i find the issues list so I don’t bang my head pointlessly as I flounder to add stuff and learn. I am starting from scratch.

You can find it here: https://github.com/home-assistant/hassos/issues . Has anyone tried comparing the speed of Running HA on HassOS vs Native pi + docker on pi4? Trying to see which way I should go

I have it running with the beta and my snapshot from my Rpi3. It’s just that you cannot transfer over the whole config cuz some things are breaking it. I had to ssh into and stop duckdns and some other things for it to start properly. So do a snapshot but choose carefully what you transfer over

Oh and just like Alexander above said disable nginx / duckdns addons when you are restoring from snapshot, and just reinstall them again manually. I spent 15 minutes trying to get back in.

Any guide for using SSD with pi 4?

The only way I got SSD booting on Pi4 is to go with Raspbian Buster instead of HassOS and then install Hassio on top.

The caviat is that you will still have to have sd card plugged in to boot but then everything will run of SSD usb. I got a Kingston A2000 NVMe drive (it’s pretty cheap considering the speed you get) and Shinestar adapter for it . While you are there pickup yourself this bad boy heat sink case Pi4 runs much hotter then pi3 and will throttle, and you will be back at pi3 speed

It was actually pretty easy setup from there

Restore HA Snapshot
All done, you should now be able to access Home Assistant from your pi ip. Login and restore your snapshot. I would also uncheck nginx or duckdns addons if you had those and reinstall them manually. I had to edit my local host file just to get back in because of them.

Also it appears that HA doesn’t get started automatically after the snapshot restore, you will have to start it up by connecting your homeassistant docker container and running “hassio ha start” , I gave it 15min and then started it (or you can reboot your Pi4 that should start it up again)

If you used Zwave Aeotec Z-Stick Gen5 stick on Pi3
Buy the Sabrent 4 port USB2.0 adapter. Otherwise your Zwave Aeotec stick won’t work, more info on this here. I tried 2 different ones some of them sort of work but they glitch, this one has been solid for a few days. Make sure you get the USB2.0 version, plug it in to a usb2.0 port. I got 50+ zwave devices on this thing and they are all humming along. You can also switch to HUSBZB-1 (if you don’t want to deal with the hub) and will give you Zigbee as well. The only issue is that you will have to remove all your Zwave devices one by one and then re-add them back to the new stick one by one (no thank you). If anyone knows away around this I would LOVE to hear it.

If you used GPIO ports, some now are disabled
I was using about 10 ports for my home alarm reed sensors. Pi4 has the same Gpio layout however for some reason ports don’t get set to pull up resistor which is needed to read the switches. They still show up active under hardware menu but will be useless without the pull up resistor (this happend on HassOS as well btw). The workaround is you have to manually set them to “pull up” during boot inside raspbian. Here is a guide on how to do that

Pi4 + SSD Performance Difference
The performance with that drive is huge! I’ve been getting score of 9500 with that drive vs 300. You can benchmark yourself, while you are in Raspbian run:
curl https://raw.githubusercontent.com/TheRemote/PiBenchmarks/master/Storage.sh | sudo bash

You can see other’s people benchmarks here: https://jamesachambers.com/raspberry-pi-storage-benchmarks/
In the real world it means no more waiting when clicking between screens. Recorder and Event log is actually usable, you click it and things instantly show up. Before I had to count to 10 to get it to show up.

Raspbian vs HassOS difference
For those who are wondering if Raspbian OS is faster then HassOS !

Thanks for the great instructions @skynet01!

I’ve currently been running manual installation of HA because I have couple of local python scripts that are polling for GPIO changes and reporting the data to HA via depricated homeassitant.remote.

My question is, can I use the same process when running HA in docker image and does it support local python scripts?

not sure about local python scripts. But it’s pretty much no difference between Raspbian +Hass.io and Hassos + Hass.io . For both of them gpio pins work as i use those myself.

Currently I’m with Pi 3 with HassOS + Hass.io and I was wondering if I want to keep it that way or go with RAspbian + Hass.io. Because there is no noticeable performance benefit from hassos ( just the simple setup ) I definitely will prefer Raspbian as Im old school linux user.

Raspbian vs HassOS difference
For those who are wondering if Raspbian OS is faster then HassOS !

I’m talking 5 seconds to check config in Raspbian vs over 2 minutes in HassOS!

Thanks for the guide and buying tips. I didn’t know about the cool pi-4 heat sync case. I had the little heat sinks and fan, I upgraded

Bought the SSD and adapter too. Nice!

I had a few hiccups:
Formatted SSD fat32 used mini tool partition wizard
From Tom’s Shareware link, several items are a bit different on latest buster. One missing (.) slowed me down for a bit.{ sudo nano /boot/cmdline**.**txt (was missing (.)}

This link helped me with just the boot cmdline.txt edit.

Looks like I have docker, Hassio supervisor, and DNS installed, but hassio won’t run. Do I need to edit the hassio_install.sh script?

Well fist you were support to format it as ext4 and not fat32 (it will work but your file size will be limited), sudo mkfs.ext4 /dev/sda1 the reason you cant start Hass is because you are trying to run that command from rasspbian, you need to connect to your hass docker container then run it in there.

You don’t have to modify hassio_install.sh

Thanks for the help,
I found an error. I will paste now and start searching for cure.

I think it’s due to this https://github.com/home-assistant/hassio-build/issues/115
when you ran the install script did you specify that you have pi4? with sudo bash hassio_install.sh -m raspberrypi4

I am pretty sure I followed your scripts.
I just ran sudo docker system prune
then did the scrips again.

Yeah you should be able to access it from the site now. when you do docker sudo docker ps do you see homeassistant on there? What do the logs say if you do

Alex,
Thanks for the help I got it running.
Deleted all containers, and reinstalled. (Found How to remove all Docker containers and images from the host scripts here

Now I will restore my pi3 image onto the pi-4 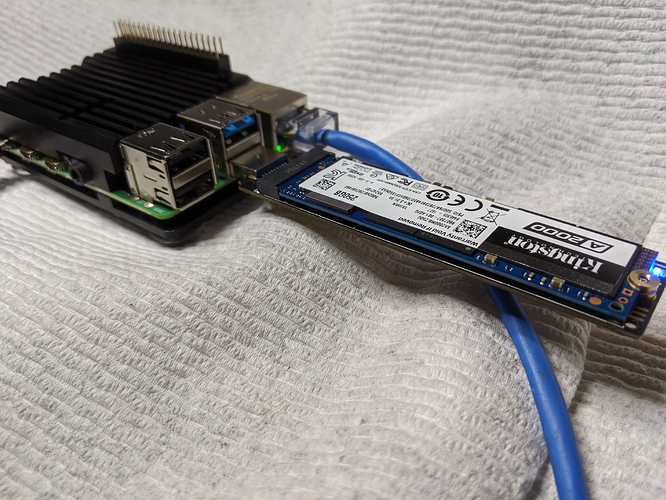