Why won't HA use bluetooth speakers?

It would be straight-forward enough in theory to create a Bluetooth audio integration that paired the device to the system, at which point pulseaudio would treat them similarly to locally connected speakers. But this won’t do what people want. To have them actually work as media players it would be necessary to implement a local media player to actually play the audio source. That is not easy, especially since you need to configure them to output to specific pulseaudio

Even then the ability to play audio on more than one speaker depends on the specifics of the Bluetooth adapter used, as certain older one cannot support that.

Also all of this so far has been assuming classic Bluetooth audio, but there is now a new BLE based Bluetooth audio standard that makes things even more complicated.

Furthermore the chances that esphome bluetooth proxies would support audio is basically zero, so it could only support speakers in range of the Bluetooth of the home assistant machine itself.

Basically Bluetooth audio is absurdly complicated, would take an enormous amount of work to support, and would still have weird limitations that users might not expect.

Yes, especially with the rise in popularity of Bluetooth LED Bulbs, it would be neat if we can use those bulbs to play notifications and messages throughout the house. Range is an issue, hopefull that can be solved with some sort of proxy.

Just chiming in here with some additional interest. I have had no problem using esphome and an ESP32 to stream music to an attached speaker via I2C, so it would seem that the ESP32 can at least stream music as an audio device. the trick is then pairing a bluetooth speaker with an ESP device as an audio output. So it seems possible to do HA->ESP->audio-out, but instead of a wired speaker, one that is paired with the ESP32.

I would be okay if we could get local speaker/mic port exposed in HASS.

then I can hook it to whatever I want.

ESP32 to stream music to an attached speaker via I2C

Can you share which project you have used?
Since bluetooth audio is still not practical, I am looking in to different ways to get it working. I would probably solder my own board and install it in the ceiling with a speaker.

Take a look at esp32 squeezelite. This runs an instance of squeezelite on an esp32. You will also need to be running Logitech Media Server (LMS) which is a add-on for Home Assistant.

Esp32 squeezelite can directly output audio to a Bluetooth speaker or an I2S DAC. 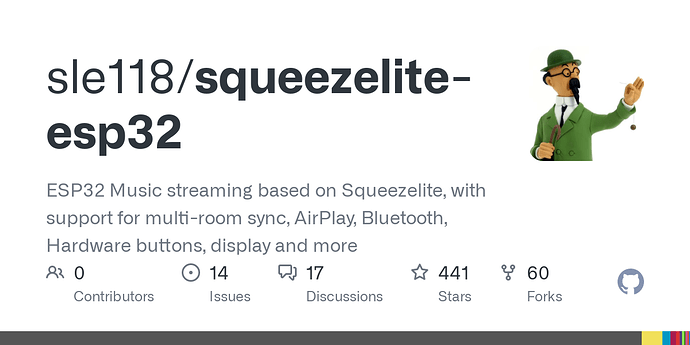