Hi everyone, I was thinking that it could be nice to start a thread for Home Assistant users in New Zealand. It would be interesting to hear about home automation products that are available in NZ since it sometimes can be hard to find things that people are using in the US.

Collection of some other NZ threads:

Great idea. I’ll post more, but just wanted to voice support so far. There is also the Australia thread, and as they have identical electrical rules to us, it can be a good place to learn of certified stuff. Australia - Electrically Certified Hardware

Hi @nickrout, thanks for your reply! Thanks for posting the thread about Aus certified hardware! I saw your comment about insurance claims, and I should probably double-check everything I’m using. It’s all been great so far but I don’t want to risk anything.

Hi Nathan,
I am the Wall switches for Aus / NZ / Islands / USA guy, and think a NZ page is a winner. well done!
Really interesting to hear what people are doing locally. I posted a question at the start of the year but no one has responded, Basically I want to read one byte using the modbus integration, but HA flags an error saying uint8 is not allowed, I HAVE to read 8 bits, no more, no less for my I/o boards to opperate as inputs. still not solved. I’m wondering if I should make a separate sub system to do the modbus thing and hang it on the ethernet for HA to see. Seems a pity though.

I have been taking advantage of Contact Energy’s three hours of free power at night by using it to heat tanks which are used to heat the floor later, and other loads like charging the car.
@nickrout - Yes most electrical rules are the same in Aus, some minor diffrerences especially about zones and heights where the rules change.

have some GOsund with tasmota on them

sonoff basic behind most of my other light switch

And Have Shelly dimmer

My Lounge Setup mite give other user Ideas Share your Projects!

Just want to show off 1 room of my house that home assistant has Control of… TV panasonic 65" [image] 1= broadlink 2= IR repeater (going into cabinet [image] kick board slides out hiding all the cabling how I get all my IR codes into home assistant [image] wemos with a IR shield on it with Tasmota on it https://wiki.wemos.cc/products:d1_mini_shields:ir_controller_shield my IR gas heater [image] one of many 433 switch talking to sonoff RF with tasmota on it [image] with the…

Hi, Thanks a lot When i used it in tasmota there was a extra sensor ( counter ) which was updated each time the feeder had fed the fish . Just have put your extra counter sensor in the config file, and yep it works like a charm, it gets updated each time the fish get fed. if i reboot the counter starts with zero again The handy thing is if you take note how many feeds it does before the food container is empty you can write a automation to warn you when to fill it up again. I act…

been playing in here for over 4 years

@myle - I just saw your comment here about the car presence detection video: My Lounge Setup mite give other user Ideas - #7 by myle
That’s really cool! I had been trying to get this to work for a while using our iPhones for presence detection, but it didn’t work very well because the mobile app doesn’t update HA often enough. So sometimes it would be very slow or wouldn’t work at all. I never though about putting an ESP32 in the car and plugging it into a USB port. That’s a cool idea to automatically open the garage door when the car drives up and connects to the WiFi network. I have a few spares so I’ll probably set that up this evening.

The other project I’m working on right now is to automate the extractor fan and light in the rangehood above my stove. 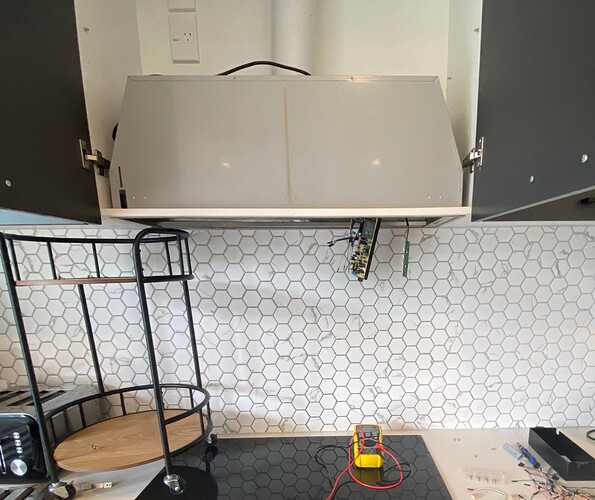 I’m building a little circuit with an ESP32 to sit between the control buttons and the main circuit board. So I can control the fan/light, but still use the physical buttons to control it as well. It ended up being a bit tricky since the buttons also have LEDs, so I’ve been getting back into some electronics stuff: 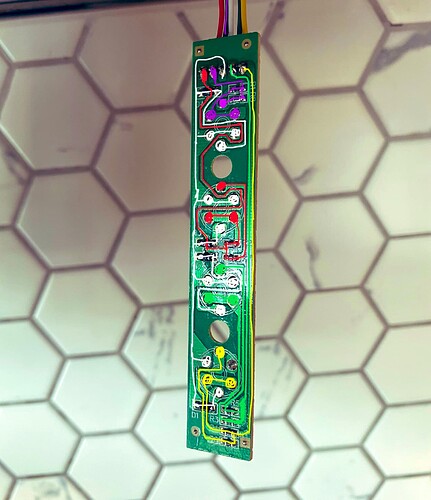 I just discovered http://tinkercad.com while I was working on this, and it’s really cool! It can actually simulate a whole circuit inside the browser, including code running on an Arduino, and even multimeters so you can measure current and voltage across components: 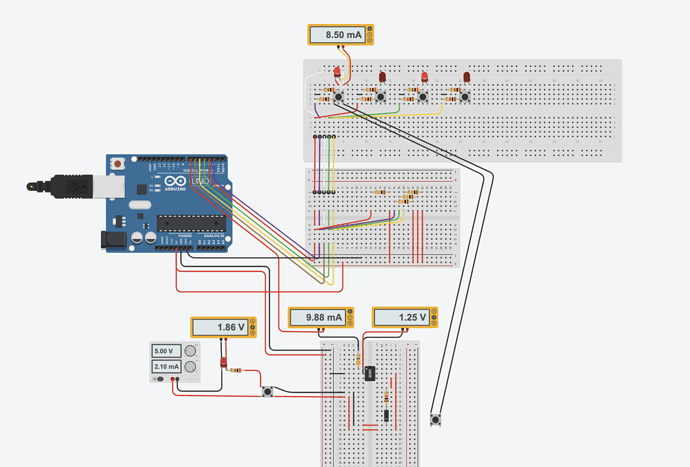 I was able to build a virtual version of the rangehood controller board, and then figured out how to wire it up and get it all working with an Arduino/ESP32 in the middle. I’m going to use optocouplers to simulate the buttons and actually control the fan/light. They’re similar to relays, but they use light to switch another circuit on and off, and it keeps the two circuits isolated.

Once I get all that working, I want to put an air quality sensor in the kitchen and automatically turn on the extractor fan. And also turn on the light via motion sensor.

I always have a lot of fun with home automation projects like this, and end up learning a lot as well!

I made a mark2 one with ESPHome

mine a 25year old one slide switches got me thinking

I have been here 6 years in November, live near ChCh. My system is a bit higgeldy piggeldy as I put too much time into fiddling, and not enough into making shit useful. I have some good motion triggered lights and lights that dim down when playing movies/tv. Some automations to turn the heat pumps on and off.

snap Bro same got the tv thing to happen also

one of my problems wife does not like the Dim lights on a movie
So have automation only dims the light when wife has gone to bed.

and doing heap of fiddling also

Funny, my wife said a couple of nights ago it is great.

I have been taking advantage of Contact Energy’s three hours of free power at night by using it to heat tanks which are used to heat the floor later, and other loads like charging the car.

I’ve recently moved down to Hamitlon from Auckland. Bit of a lifestyle block so have bee tackling decent internet (starlink) and a few other things as I get my HomeAssistant stuff back up and running.
My system is also a mix of all different stuff, a bit of everything…
Tasmota Stuff

Recently splashed out on a Work robot mower so been tinkering with that of late.
Always keen to chat to others… Hoping to find some local people to catchup socially and swap ideas!

I too have a t/v backlight, I use the CVBS output from the PVR (never watch live t/v - too many ads) to adjust the current into the back light. The current is integrated with a three second time period to minimise any flicker. The light dims on consistantly dark scenes, else bright. I actually made it because the PVR is installed in the attic and you can not know if it’s on if the monitor (Philips 55") is not running. I use HA to hold a relay on if we want the light on permanently.
I am interested how your “wife gone to bed detector” works?

Hi Tom, the electricity retailer is responsible for metering. Taking full advantage of plans like this is a bit tricky, One usually has a power limit of 15kVA so three hours of free power is 45kVA max. In practice it is difficult to find useful loads to do that. This is what the power retailer is banking on. In my case I have built the house, so have deliberatly installed energy store to hold solar derived power, It is that I’m using to store the free power. Water is brilliant and cheap for thermal storage, and needn’t cost a bomb. I used HWC’s bought from the scrappy (copper of course). These are used during the day for solar buffering. They feed a coil in the (potable) 300 litre house cylinder and run the underfloor heating system. During the free power period a ground source heat pump runs and boosts these cylinders, as well as direct heating the potable cylinder. Result enough hot water and warm feet! Our power bill for this month came this morning $127 dollars not too bad. Many people ignore solar hot water heaters in favour of PV, but thermal panels are about six times more efficient than PV at converting sunlight, so need much less roof space. That said, I have both thermal and PV panels because I can. If you’re ever in Napier I’d be happy to show you the system. P.V panels feed a 10kWh battery which runs an inverter to feed all those things that gnaw away at the grid all day - towel rails, fridge, freezer, always on lights, etc it’s amazing how those little watts add up. I don’t try to run cooker or hob or fires, and never export surplus power 'cos it goes into the thermal storage tanks! My attitude to solar is the base energy is free, so grab more than you need and dispose of surplus, that way you can extend the useful season. It works!

Wow that’s very cool! It’s great that you can order one with ESPHome pre-installed, so no need to mess around with tuya-convert or soldering wires. All my other smart plugs use an ESP8266, but you could use this one for BLE presence detection as well, since it uses an ESP32. I guess they are also certified and follow NZ regulations, which seems a lot safer than ordering random products from AliExpress. Thanks for sharing!

There is a pdf promo sheet you can download which seems to have all the appropriat certifications listed. https://www.kiwi-warmer.co.nz/site_files/29736/upload_files/KiwiWarmerFlyer(1)(1).pdf?dl=1

but you could use this one for BLE presence detection as well, since it uses an ESP32