This blueprint adds support for flipping the cube to a specific side regardless of the side it was on before. 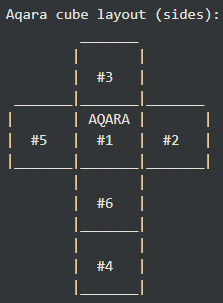 (Thanks to idantene for the above!)

This looks like an awesome replacement for my nodered implementation.

But, the device selector only allows the zha devices and mine are from zigbee2mqtt. Is there a reason for this? Maybe zha gives more detail for the action or different action names?

The trigger would definitely be different, and I’m guessing the data is probably also different. So the trigger and action variables would need to be rewritten.

I just started playing with magic cube tonight so this is great timing!

I just got this device a few days ago, and I am thrilled to see this blueprint, thank you! One question I have and have not been able to find an answer to is about the wake option. What is the motion with the cube that triggers the wake action?

That’s a great question. I honestly have never gotten a wake event of any sort from it in zha_event. Theoretically there should sometimes be a checkin event. I suspect it isn’t based on a gesture, but is possibly something that it occasionally wakes itself to check in with the hub, maybe?

Great blueprint, thank you! I’m only using a few functions from it, but it works great. If nothing else your code helped me solve a problem I was having with my own blueprint!

Great blueprint!!!
I think that after the last update, though, they fixed the 2<->5 and 3<->6 knock and slide. So maybe you have to update the blueprint

This looks awesome and I want to use it so bad, I have all kinds of ideas…
But…
I think I am missing something.
I have added my Aqara Cube in ZHA successfully but it has only one entity, the battery level of the Cube.
Any push in the direction of how to get the device implemented properly so I can start using this awesome blueprint with that cool little device would be massively appreciated.

That’s the correct behaviour.
You can start using this blueprint. Just select the right device.

Yep, you’re totally right.
I should have just tried it and I may have realised that.
I really appreciate the help.
Also, this works awesome!

Thanks @brent, that looks really powerful and this blueprint convinced me to buy one cube.
One question (or two) : it does not seem that sides of the cube are identified by numbers. How to you know which one is which ?
Second one : Aqara only advertises 6 moves and they don’t take into account the side. Shall I understand that through the Zigbee messages sent by the cube we can know the side nb facing up, etc … If so, this opens up to even more actions.
tks

Thank you for this good job!

This made the cube a really useful device. I’m a newbie.

Can you please tell me if there is some way to add a separate rotation for each side to this blueprint?

Or if this is too much for you, maybe someone else from respected users can give me an answer?

This would be the pinnacle of excellence in using this device.

great work!
just got an aqara cube can’t wait to try this out.
does anyone know is it possible to have a double tap action with this blueprint, and if so how to implement?

EDIT: nevermind - my understanding now is that ‘knock’ is a double tap action, and there is no single tap?

I’m glad this has been useful to so many people!

One question (or two) : it does not seem that sides of the cube are identified by numbers. How to you know which one is which ?
Second one : Aqara only advertises 6 moves and they don’t take into account the side. Shall I understand that through the Zigbee messages sent by the cube we can know the side nb facing up, etc … If so, this opens up to even more actions.

The side with “Aqara” is 1.
The side opposite that is 4.
If you position the cube so that Aqara is on the top, and facing you so you can read it, the remaining sides are:
Up: 3
Left: 5
Right: 2
Down: 6

If you want to check for yourself, go to Developer Tools → Events. Start listening to zha_event, and the event data will have an activated_face variable. That’s the side that’s up.

Some of the gestures do send the activated face (flip, slide, knock). Others don’t (drop, shake, rotate).

Can you please tell me if there is some way to add a separate rotation for each side to this blueprint?

The information sent by the cube doesn’t include the side that’s up during a rotation. It would be possible to track that in an input_number helper, but I’m not sure how to generalize that for a blueprint without hardcoding a name of a helper (maybe possible, but if so I don’t know how yet). Also, there are many things that can happen that would get that out of sync, like tossing the cube in the air. Very easy for the side that’s actually up to be different than the last reported activated side.

does anyone know is it possible to have a double tap action with this blueprint, and if so how to implement?

It seems that a single tap doesn’t send an event at all. Any number of multiple taps in quick succession (I tested 2-6) send a single knock event.

Love it! Could you extend this with rotation on each side (same as slide)?. This would allow me to change brightness of multiple lights and adjust volume for instance.

Nope, unfortunately not. For a more thorough explanation, see my comment a couple replies up.

Am i the only one to report that my logs fill up with messages like the one below every time an event kicks in?

and the same for relative_degrees if flip is used.

The culprit is the blanket access of those trigger.event.data.args keys when setting up the initial variables.

A fix would be to check do the existence of the key first, like this:

[edit: had suggested another code above for some period, but reverted back to default filter]

Is there any possiblity that this fix can be applied?
(and if yes, do i need then to refresh my blueprints, somehow?)

PS: thank you for your efforts.

Thanks for finding that and for the code revisions! Currently, relative_degrees isn’t used, so I commented it out. I also provided default values for both value and flip_degrees. In my testing, there are no longer errors, and everything still works as intended. Additional feedback welcome!

Edit: I’m not sure of the correct way to update yours. Documentation says “When a user imports a blueprint, Home Assistant stores the URL from which it was imported. This will allow Home Assistant in the future to update blueprints by looking at updated blueprint code in the forum topic.” So I can’t tell if that means it will automatically update or not.