FYI, ITead has about a week ago announced on Facebook that their CC2652P based “Sonoff Zigbee 3.0 USB Dongle Plus” will be released soon and it sounds like a premium product at a low-cost price.

Update! Initial batch(es) have already sold out, however, pre-ordering is available at Itead official store. 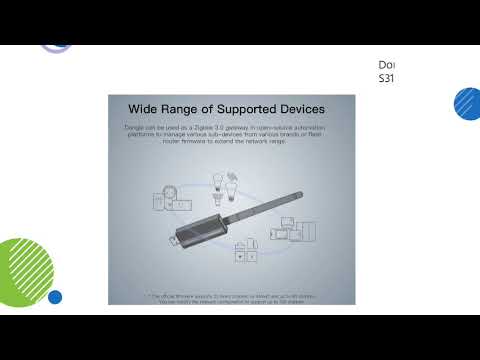 Most experienced Zigbee users in the community know that Texas Instruments CC2652P is together with the competing Silicon Labs EFRMG21 chips at this time the most capable and most powerful multi-protocol MCU with 2.4 GHz radios on the market. CC2652P radio chip is currently also the most popular as a Zigbee Coordinator and Zigbee Router in the DIY Zigbee userbase community because it is newer so the firmware is well maintained and is stable/mature in both Zigbee2MQTT and the built-in ZHA integration for Home Assistant. Just like Silabs EFRMG21, TI’s CC2652P feature an integrated Power Amplifier that is technically capable of +20 dBM amplification (though legally the firmware is probably not allowed to be configured to use more than +10 dBM amplification).

According to their marketing material, it will come pre-flashed with Texas Instruments Z-Stack 3.x.0 coordinator firmware and it should work out-of-the-box with either Home Assistant’s ZHA integration (which depends on zigpy so will probably work with Jeedom Zigbee plugin too) and Zigbee2MQTT (a.k.a. Z2M, which depends on zigbee-herdsman so will probably work with IoBroker Zigbee as well).

In addition, ITead specifically mentions that this TI dongle can alternatively function as a Zigbee router (presumably by flashing Zigbee router firmware instead and open access buttons as pressing a button to enable pairing/joining mode is usually required).

It is based on Texas Instruments CC2652P (CC2652 with integrated +20 dBm amplifier) Zigbee radio and features a metal casing + an SMA connector with an external antenna. It looks a little on the large side for USB 2.0 Type-A so could connect it directly if have no other USB devices but with this using 2.4 GHz frequency band like most other Zigbee adapters it is still recommended to always use a USB extension cable in order to get it away from the computer or any other electronic appliances (and their cables/wires) so it gets less radio frequency interference (RFI) and will thus achieve better signal reception. 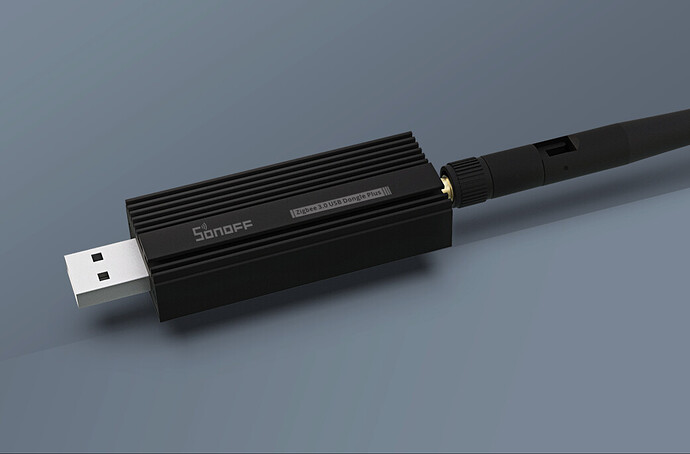 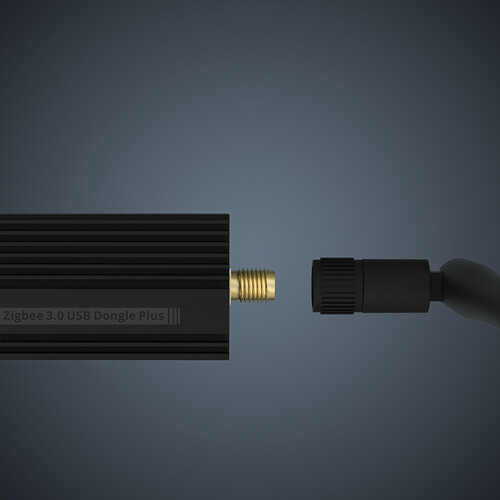 It is based on Texas Instruments CC2652P (CC2652 with integrated +20 dBm amplifier) Zigbee radio and features a metal casing + an SMA connector with an external antenna. It looks a little on the large side for USB 2.0 Type-A but still recommend using a USB extension cable.

Interestingly it uses a Silabs CP2102N UART-to-USB chip so wonder if it will have unique ITead VID and/or PID strings specific for this adapter so can be added to autoomatic USB discovery in Home Assistant?

FYI, Home Assistant developer bdraco has just now added support for automatically discovering USB adapter in Home Assistant’s ZHA integration, (for details read PR #/54904, #54935, and #54986). See: https://www.home-assistant.io/integrations/usb/ I think it would therefore be much appreciated if everyone could submit new PRs with “friendly name” as a description if you got any ZHA compatible Zigbee USB adapters which unique Vendor ID (vid) / Product ID (pid) identifier that has not yet been a…

PS: I understand ITead went with CC2652P instead of Silicon Labs EFR32MG21 for this “Plus” dongle version because of the current silicon chip shortage (which Silabs parts suffered for more than most).

Hopefully, we will also see ITead release a new fixed revision of their cheaper Zigbee 3.0 USB dongle with proper RF shielding and either corrected PCB antenna design or better yet a ceramic chip antenna.

As we know, ITead’s previous ‘non-Plus Zigbee 3.0 USB dongle’ is/was based on Silabs EFR32MG21 SoC which has just as powerful MCU and radio, but sadly was proven that implementation in ITead’s first Zigbee 3.0 USB Dongle PCB board revision had a badly designed integrated PCB antenna with poor tuning and no electromagnetic shielding which caused huge issues in radio reception, and to this date, it has been listed as “out-of-stock” since after the initial batch was sold out. Again, very sad since that could also have been a great Zigbee Coordinator adapter if it had been properly engineered. Hopefully, they will decide to take another stab and redesign that as a new product after the chip shortages as it would be great if they could also offer a Silabs EFR32 based alternative for extended compatibility.

ITead (of Sonoff fame) has announced that will soon sell an inexpensive Zigbee 3.0 USB dongle based on Silicon Labs EFR32MG21 which is a very powerful MCU with an integrated +20 dBm radio amplifier: https://www.itead.cc/zigbee-3-0-usb-dongle.html Note! Read all updates as the real-life test shows it has hardware issues that need some workarounds: Update 2021-04-21: People are reporting EMF/EMI/RFI interferences issues causing serious problems with signal reception and especially Zigbee device…

Wondering if this CC2652P serial port will have pins connected for RTS / CTS Hardware Flow Control?

Replying here to a related question in this other thread with topic “Best most powerful zigbee stick?”

Not understanding for what is used this metal

Seriously, if the right parts on PCB board itself has proper RF shielding (which I understand it does now) then that visable metal case is purly aesthetic choice making it easier to sell in brick and mortal stores.

However guess is a metal case probably adds unnessesary cost which is passed along to customers.

Wondering if this CC2652P serial port will have pins connected for RTS / CTS Hardware Flow Control?

They now posted some documentation which states that this hardware dongle does support “Hardware Flow Control” but default firmware that it is flashed does not (so default uses “Software Flow Contol”):

These are available to purchase now. 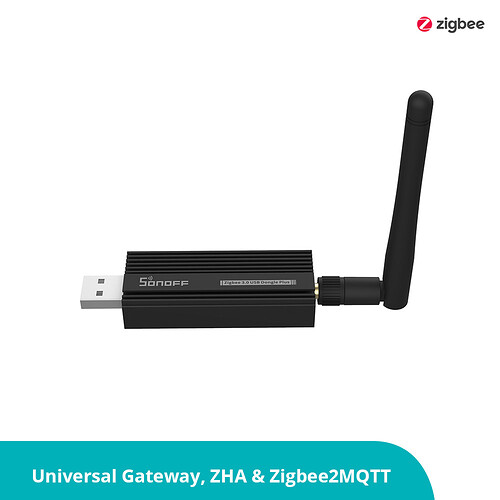 Thanks. Ordered. I already have a tubezb ethernet coordinator, but I think they are great routers too.

Initial batch already sold out, however pre-orders for next batch is now available at Itead’s official store.

SONOFF Zigbee 3.0 USB Dongle is a universal Zigbee USB stick. It can be used as a universal Zigbee gateway in Home Assistant or other open-source platforms via ZHA or Zigbee2MQTT to locally control all your Zigbee sub-devices, so you don’t need to... 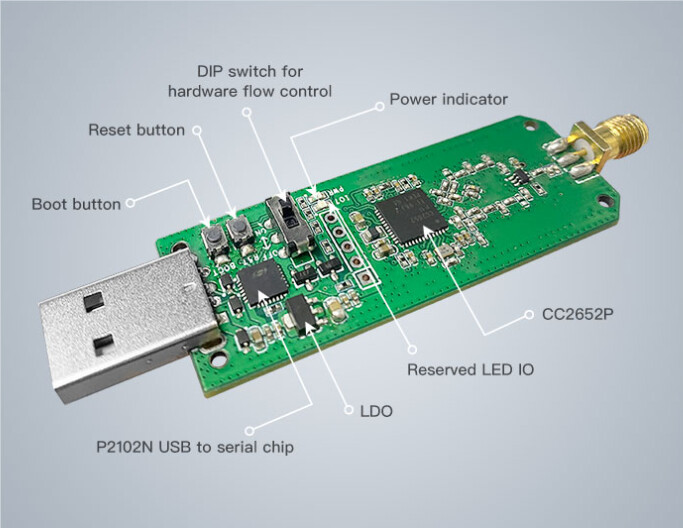 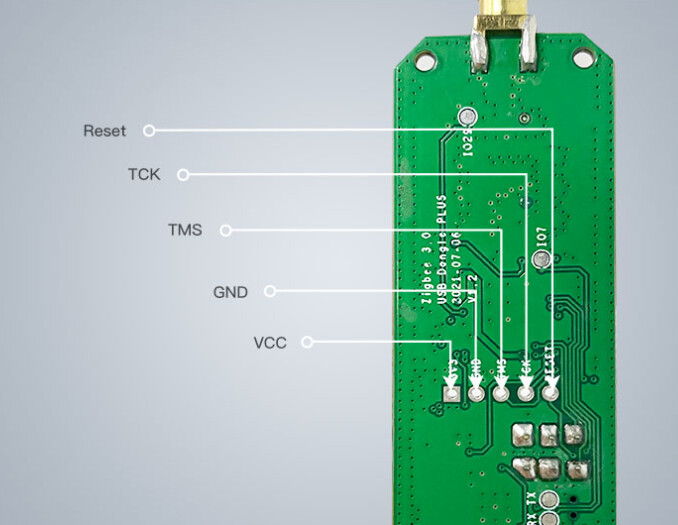 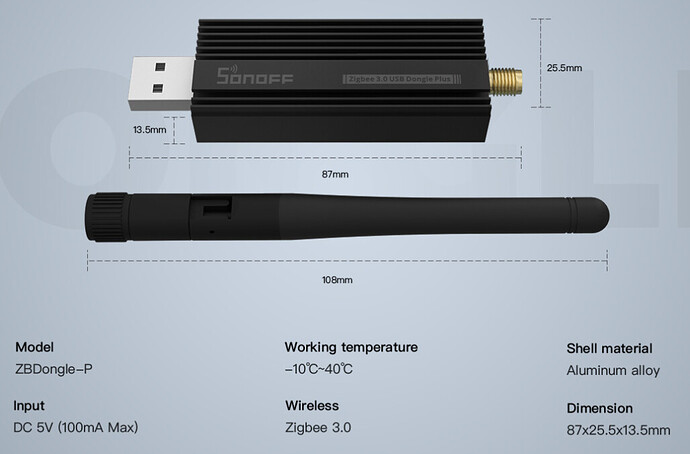 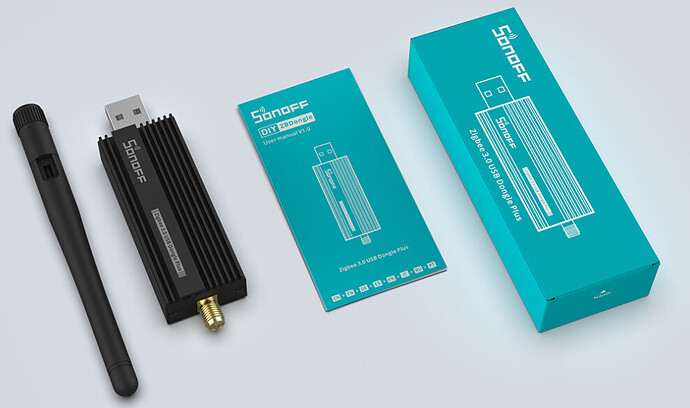 This would be a great device to use as a repeater! Is there a firmware load available that can have it act as a repeater and not a coordinator, so I can plug it into a USB power adapter and have it extend my zigbee network?

You can use the zigbee2mqtt repeater firmware.

To flash : yes. Once flashed with the router software you can plug it in a phone charger or something similar

This Dongle is now sold out, you can only pre order now

I suppose it might be too much to ask whether this has any regulatory certification, like FCC?

(I realize they are based outside the US, so either this or something similar in another country, or they have indeed sought this for products sold abroad—I just don’t see any filing for this one.)

Do you see filings for any of the other zigbee coordinators?

Yes, this is the norm for commercial offerings in the United States. (I would not expect this for a DIY solution like a TubeZB device, but this is not one of those. And anything that uses an internal antenna or product alrededy certified from another manufacturer may be covered by that–part of some Hoke Assistant Amber questions if you’ve followed thst–but this one is external and I’m not aware of any TI product sold like that.) Most coordinators are some sort of full hub/bridge/gateway rather than a “stick,” and I’m not aware such ones of any that aren’t filed. The only other offering I can think of in stick form is the Nortek/Linear, which is filed as expected: https://fccid.io/EF400131/Test-Report/Test-Report-15-249-2722755

FYI, Koenkk from Zigbee2MQTT got info from ITead/Sonoff that this dongle comes pre-flashed with older “CC1352P2_CC2652P_launchpad_coordinator_20210120” firmware from https://github.com/Koenkk/Z-Stack-firmware/tree/master/coordinator/Z-Stack_3.x.0/bin but specifications around 50 direct children, 100/200 routes, and a maximum of 200 Zigbee 3.0 devices that is listed here should still apply → https://github.com/Koenkk/Z-Stack-firmware/blob/d019739f4a8b7bd1dfb873a3493ac876fee43974/coordinator/README.md

While it should still work with Zigbee2MQTT and ZHA regardless if firmware is a little old or not, it is probably a good idea to to upgrade to latest firmware before starting a Zigbee network or migrating.

I suppose it might be too much to ask whether this has any regulatory certification, like FCC?

(I realize they are based outside the US, so either this or something similar in another country, or they have indeed sought this for products sold abroad—I just don’t see any filing for this one.)

I know that ITead have certified quite a few Sonoff branded devices with FCC and CE before, but I believe that it will depend in how many they expect to sell of each specific product in that country/region.

So maybe not too much to ask for this product, however do not expect FCC and CE certification will be a priority and instead expect that to follow later only if and when a product is proven popular or not.

anything that uses an internal antenna or product alrededy certified from another manufacturer may be covered by that–part of some Hoke Assistant Amber questions if you’ve followed thst–but this one is external and I’m not aware of any TI product sold like that.)

Texas Instruments LPSTK-CC1352R Evaluation Board and Texas Instruments LAUNCHXL-CC1352P Development Board are based on a similar chips (CC1352R and CC1352P) are official reference hardware which both have an extenal antenna and I believe have already been tested for FCC and CE compliance by Texas Instruments.

But, it will also depend on firmware configuration when FCC test as it is usually technically possible to set an amplification in firmware that is higher then what it legally allowed in a country. So a firmware with very high amplification configuration that is legal in one country might not be legal to use in another country. However if ITead/Sonoff is set a lower than maximum then it should comply for certifications.

I wonder what will be better and why - this dongle or Conbee II. What do you think? I don’t have Conbee II but it’s considered as very good from what I read. CC2652P apparently is good chip too.